The Canadian JoeMeet seemed to really start getting it's recognition when Black Ice hit the streets. Something about that figure resonated with fans, and he alone put the Joe Meet "on the map". But what some folks might not realize is that it was this first figure that really kicked off the Exclusive figure craze with the Joe Meet. A figure so iconic that they named the site after him! ;) 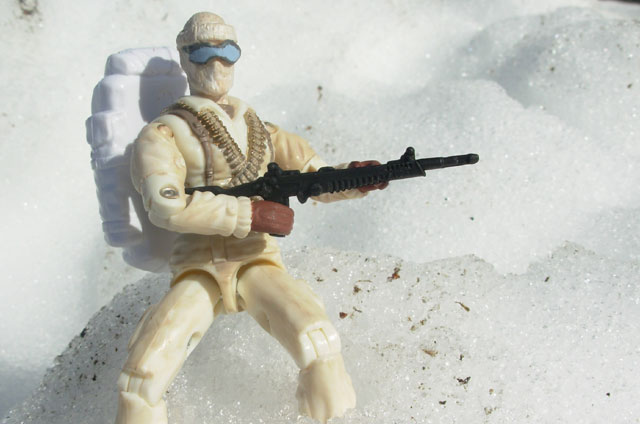 While Black Ice had some different part selection and some folks might think there was more thought behind that figure, I would say without hesitation that the JoeCanuck figure had the most ambition behind it. While the majority of the figure is simply an amalgamation of the 2000 versions of Big Ben and Whiteout that were clogging the shelves in Canada, a very unique head sculpt was designed from scratch by the always-talented Jason Loo, and then casted for this figure. It ends up giving the figure a pretty different look and makes this figure a unique addition to your arctic squad. Be sure to check out Jason Loo's website, too (http://www.jasonloo.com) to see some more awesome art and support this great Joefan! ;)

With the new head sculpt, the parts for JoeCanuck breaks down as follows :

Now unfortunately the number of these figures warming pegs at retail gives them a somewhat unfair shake, but I really love the Big Ben sculpt, and I think it works remarkably well for an arctic figure, and translates into plastic very nicely here as well. The way the Big Ben parts mix with the White Out legs is seamless, too and the combination of the two gives you a very uniform arctic appearance, yet still stands this figure apart somewhat from his '00 counterparts.

The base of the figure is in the same white plastic with brownish paint wash that was available at retail, with the additions of some darker paint on the gloves. But what really makes this figure unique is the head sculpt. 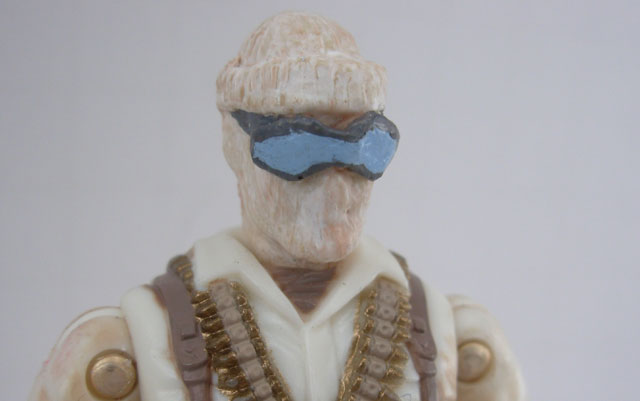 Jason Loo is the exceptionally talented artist that has designed and drawn the art for each exclusive figure for the Canadian Joe Meet, and he sculpted this great head sculpt from hand. The combination wool face mask and hat is detailed incredibly well, and the goggles are a nice touch as well. Those tiny grooves throughout the material of the mask and hat give it a lot of interesting texture, and the small bits of paint on the goggle rims and lenses just touches it up perfectly. Gives you a unique new arctic trooper and it can be whoever you want under that mask. I like it a lot, and kudos to Jason and the Joe Meet guys for making it happen. I'm not sure of the feasibility of doing this in the future, but the potential is there, and I'm happy to see this new head. Tops the figure off very well.

As we've come to expect with our exclusive figures, JoeCanuck comes with weapons and a filecard as well. 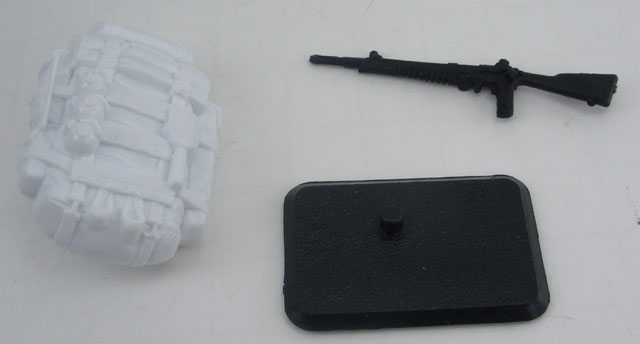 He comes with the very familiar rifle that White Out came with and is immediately identifiable to any fans of the Joe cartoon. It's a neat choice because of that element, yet is still a weapon that was relatively easy for them to come up with back then. The backpack is Big Ben's white backpack from the 2000 figure set and fits the character well, too. A nice black battle stand rounds off this accessory compliment. 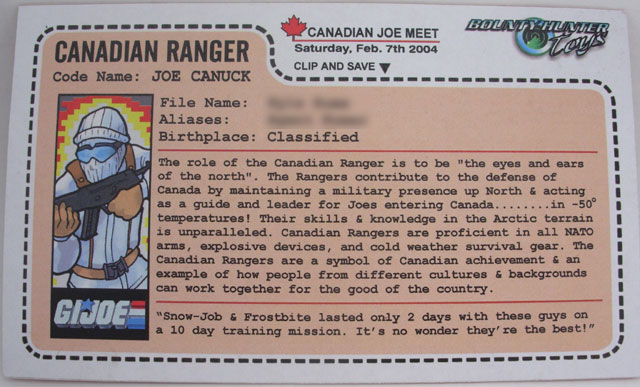 Just like Black Ice and Shiver, the Joe Meet guys come up with a nice, cohesive filecard that looks professionally produced and is well-written. The layout is perfect, the writing is crisp, and it gives the figure some personality. Very nicely done. This filecard was also uniquely personal...the figure's were pre-ordered ahead of time, so the filecards were written with the buyer's actual name! A very nice touch. 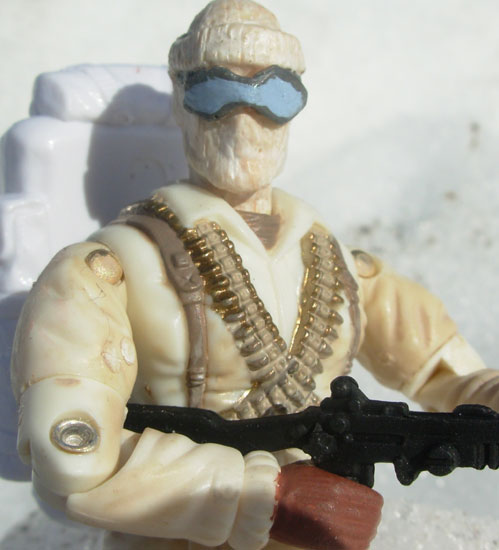 So this figure is almost 3 years old...what's the point of reviewing it now? Well, I've got Shiver and Black Ice on the site already, figured I might as well round off the trio. Not only that but the guys at JoeCanuck have started producing a monthly Joe-related newsletter which is terrific. Click here to check out that newsletter.

JoeCanuck was the original brainchild of the Canadian JoeMeet guys and proved to be a terrific way to start off their run of exclusive figures. The new head sculpt is great, I like the parts choices, and he fits into the Black Ice and Shiver "world" seamlessly. A very nice, unique figure with an interesting new head sculpt. He definitely gets my approval and I cannot wait to see what the Joe Meet guys have up their sleeves for 2008! 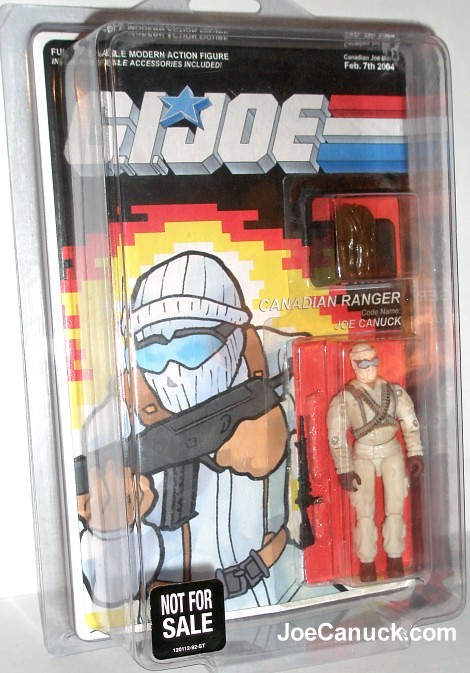 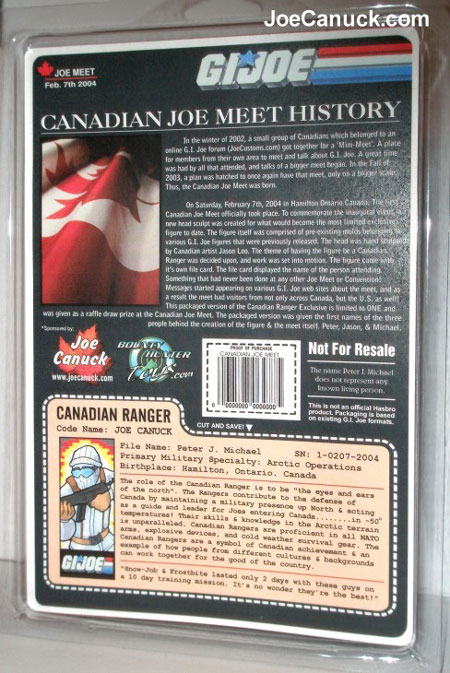 There is even a limited edition Mint on Card version...limited to ONE! It gets displayed at all JoeMeets, and of course, the backer cards for any JoeMeet Exclusives can be purchased from JoeCanuck.com. 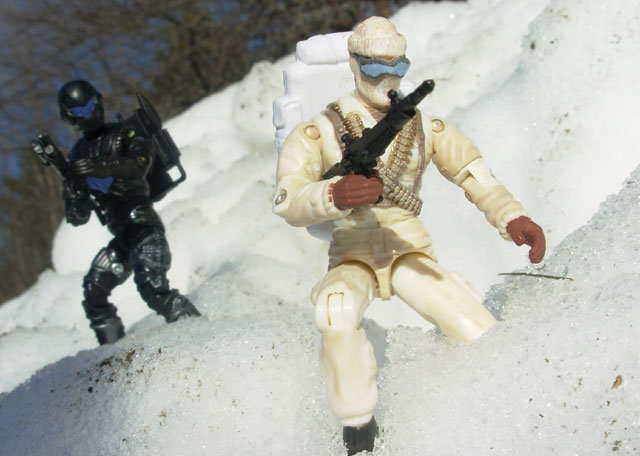 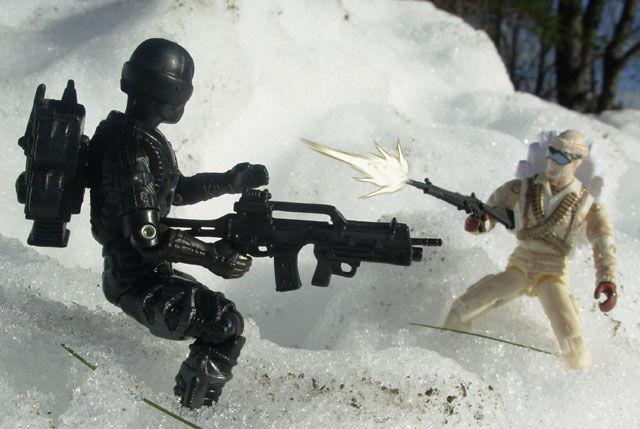 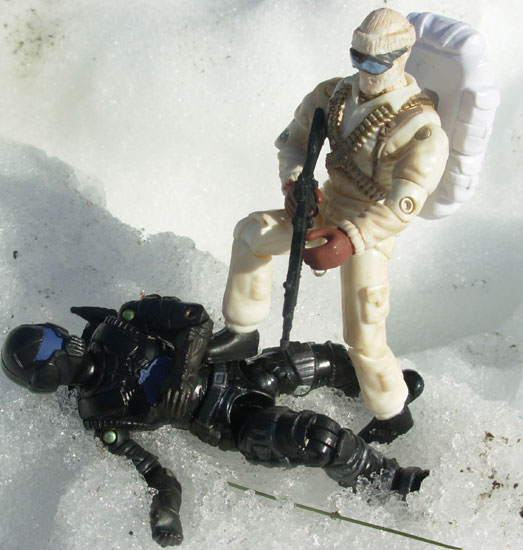 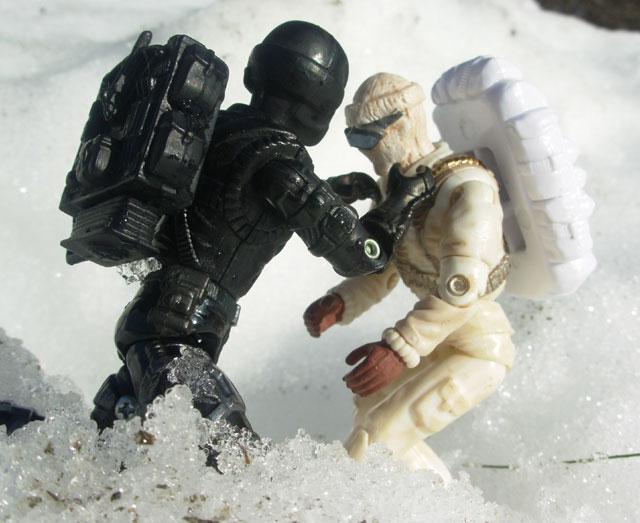 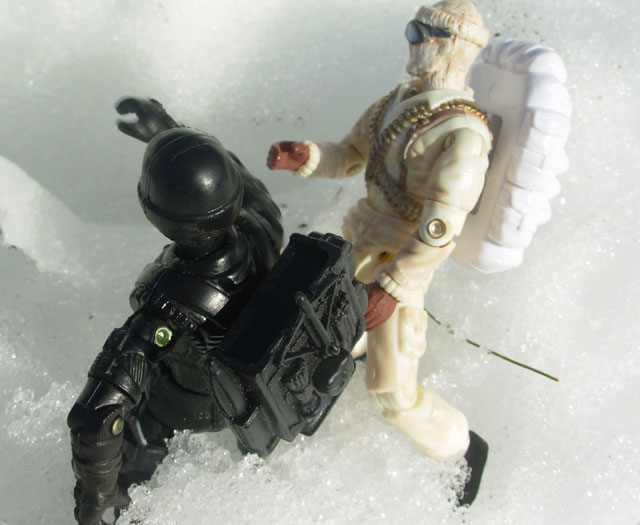 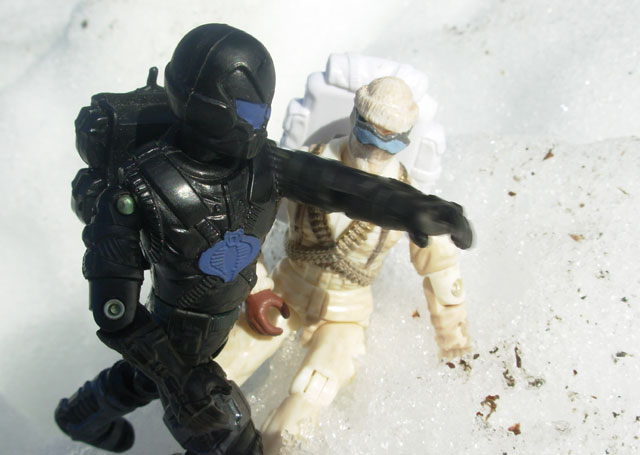 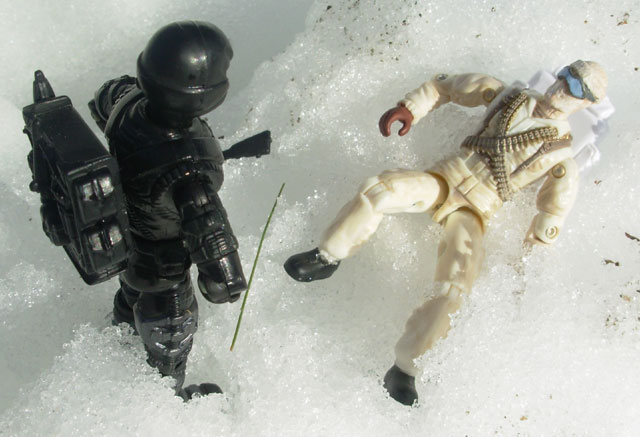 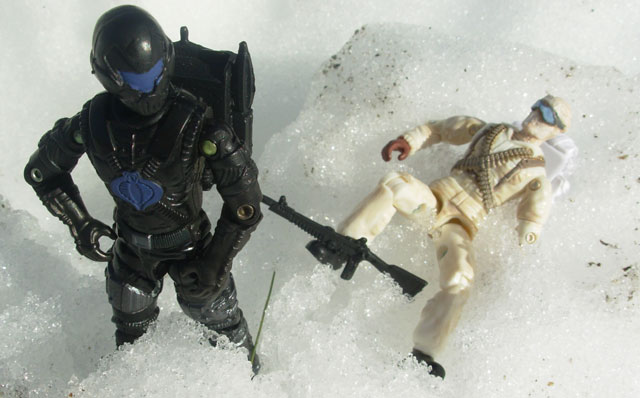 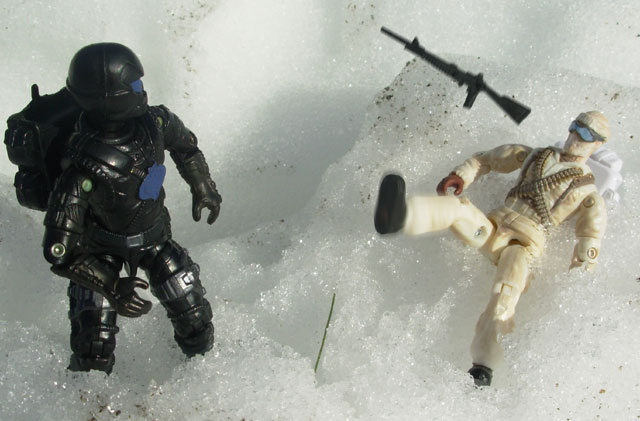 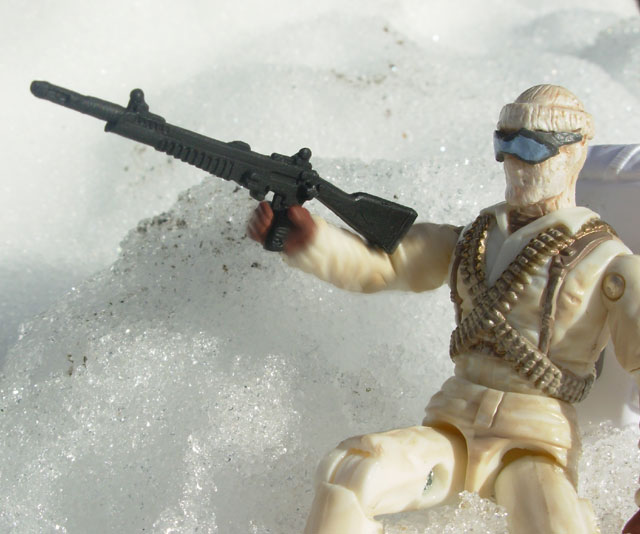 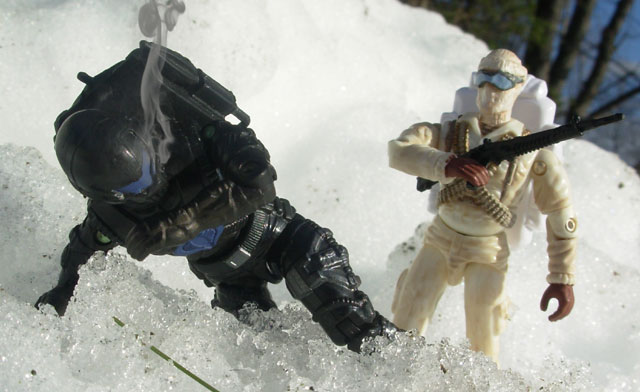