Ah, the Canadian Joe Meet. For those who don't know what I'm talking about, head on over to JoeCanuck.Com and read all about it. And no, it's not just for Canadians, however this figure is ONLY available to folks who attended the Canadian Joe meet.

Love or hate the G.I. Joe line over the past few years, I don't think many people will argue that Hasbro sometimes has trouble thinking outside the box. For obvious reasons, the Hasbro design team most likely isn't as intimately involved and familiar with mold choices and figure sculpts as we are, so we don't always get a nice assortment of different parts for retooled figures.

However, sometimes it does baffle me a little bit that they don't try to broaden their horizons at least a little bit and try some different combinations to come up with some more interesting figures. The COBRA Imperial Troopers are a good example of a neat new figure you can get using pretty common parts, but in different configurations. Unfortunately, figures like the Imperial Troopers seem to be the exception, not the rule.

It is this reason that sometimes the fans have better luck creating new figures out of even the more common parts...where Hasbro is more likely to just foist a new Mirage figure on us, enterprising Joe fans can use those exceptionally common Mirage parts to make something new and interesting. This is a perfect example.

First of all, I'm not sure if it was on purpose or not, but the cool guys behind this "fan figure" decided to use parts that have been used by Hasbro or the Collectors' Club within the past few years, and they chose some GREAT parts to use.

The head sculpt belongs to Sludge/Sub-Viper and is actually one of my favorite troop heads out there. It's a great helmet/facemask combination that actually looks really sinister and works very well for a COBRA troop. It fits the Eco Warrior format perfectly, the underwater format perfectly, and I think it works here as an arctic trooper pretty darn well, too. Just the look of the head sculpt is mean and COBRA-like, and it was really a great choice.

The torso used was originally used by Vapor, and then used by the Collectors' Club for the excellent "Air-Viper" figure from the 2003 convention. I love this torso! It pretty much exudes COBRA badness, is nice and bulky, and very well-detailed. The stretched fabric, wrinkled cloth, and proud COBRA logo emblazoned on the chest all combine together to give you a very cool looking COBRA torso. It works great with the head sculpt, too.

The rest of the figure uses parts that the majority of Joefans had written off as completely useless (Mirage arms, waist, and legs) but all of those parts mesh with this figure really nicely and just go to show you that even the most common parts can get new life breathed into them when they're used nicely. These oversized limbs compliment the figure perfectly, and even though they've been used many times by Hasbro over the past few years, they still end up being very cool and very well-utilized.

Making a "fan figure" can be a challenging process...unlike Hasbro manufacturing plants, there are no machines available to stamp logos or slap pre-established patterns of paint on the figures, so it all has to be done by hand. The guys from JoeCanuck got around this by using Rit-Dye to color a lot of the figure black, and it works beautifully. While it looks pretty monochrome, the fact that the dye merely darkens the existing colors, you still end up with a nice variety of color patterns throughout the figure. The metal armor pads on the arms and legs end up looking very nicely metallic against the stark black uniform.

But obviously, straight black would make for a pretty boring figure, so they added a beautiful almost metallic blue to the facemask and the COBRA logo. This small color addition really gives the figure life and makes him even better. Not a wide array of colors, but the colors used mesh perfectly and give you a great look.

Like with nearly everything else, weapons were likely chosen based on availability, but they work remarkably well, too. The well-known Hasbro G36 w/ grenade launcher is his primary weapon, which works well, and he also comes with a basic survival knife, backpack, and battle stand. Don't forget the filecard either! Black Ice is fully equipped from head to toe, and looks really great with all of his gear. It fits the character and the weapons are pretty neat to boot. Good choices, for sure. 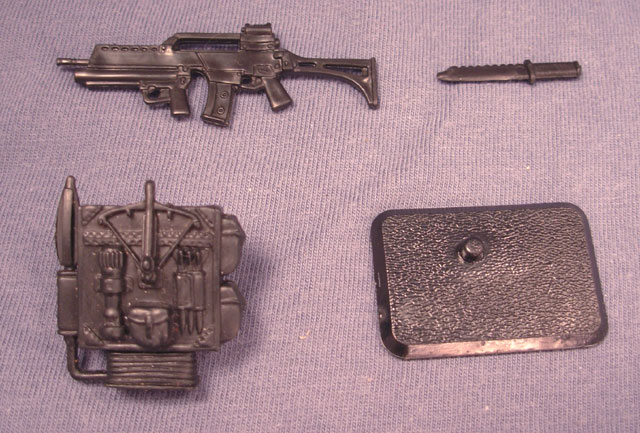 Bounty Hunter Toys is a pretty well known toy store in the Toronto area, and it is soon to become even more well known, I have a feeling. The annual Canadian Joe Meet started out as a relatively small local gathering, but over the years it has grown, and this past year several American board members made the long trip up north to check it out. The JoeCanuck Message Boards are filled with cool, knowledgable Joefans, both from Canada and the U.S. If you are a Canadian G.I. Joe fan and are not a member of this board, you're really missing out on some great conversation. Even if you're not Canadian, the board is a fun place to hang out and talk Joe.

Really, the fan figure is the smallest part of the fun of these Joe meets, as I can tell you, being a regular attende of the annual conventions every year. But, if the fan figure is going to be a part of it, it's nice to see some great thought and effort being put into it and giving us a great figure like this one.

Big thanks to Mike @ Bounty Hunter Toys for passing the figure along to me for review, and I hope everyone joins me on the trek up north next year to crash Canadian Joe Meet 2007! 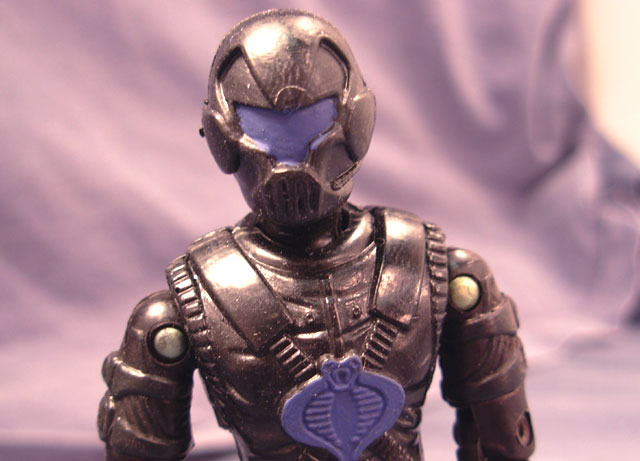 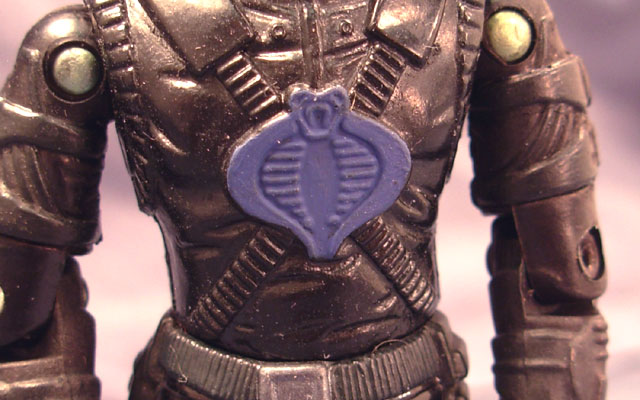 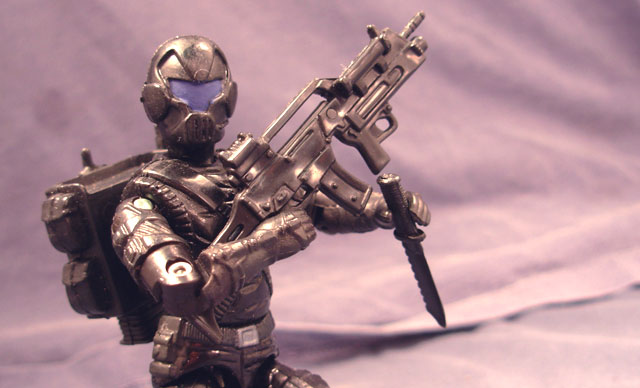 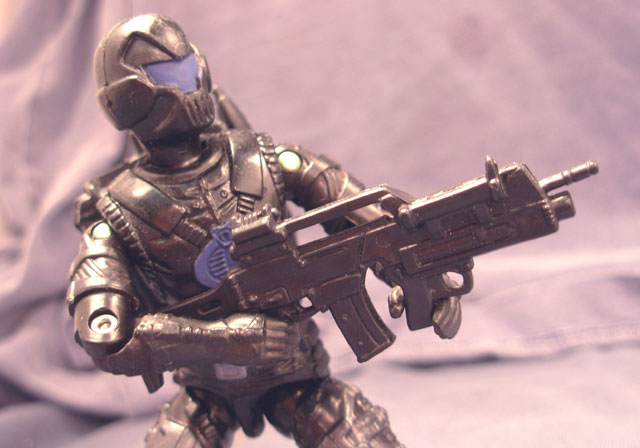 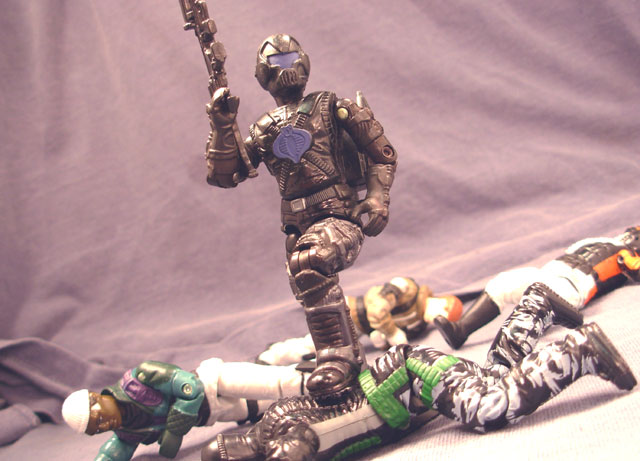 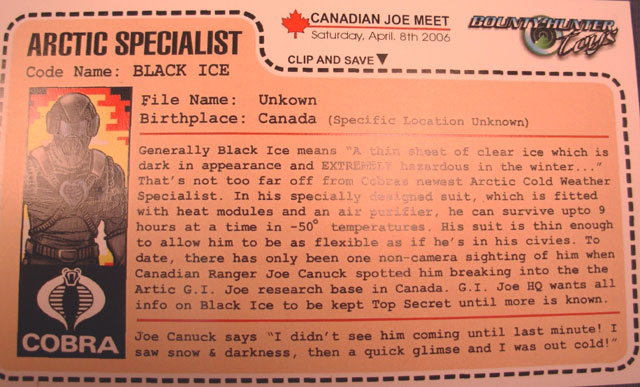