I figured it would be pretty tough to work in a story that intertwined both COBRA Commander and the clumsy mine detecting expert Tripwire, but somehow Larry Hama manages to weave a story that brings them together. I'm not sure how well the comic accomplishes this (it seemed somewhat shallow and humerous rather than serious, but I guess it did what it was supposed to do). Tripwire has never been one of my favorite characters, but as an '83 character, he fills a hole, and Hasbro seems determined to get that year filled out (while they are seeming to ignore some critical components of 1984, like Recondo and Ripcord).

Partnered with Tripwire is yet another version of COBRA Commander, a character that has already been released ad nauseum, but this version of the character is a very pleasent surprise.

If somone told me they were going to reuse Flash/Grand Slam for Tripwire, I would have said it would never work. Well, I was at least somewhat pleasently surprised to see that it actually works fairly well with Tripwire, giving him the protective pads he needs as a mine detector expert and it at least somewhat resembles the vintage version.

Tripwire's unique clumsy personality, especially when dealing with such explosive ordinance, has often been a focus point of his characterization in the comic book, and continues to be in this comic, but here it's almost taken to the extreme. He is nearly comical in nature, somewhat reminiscent of Bazooka in the cartoon series. But really, my focus is on the figure itself, not really on his portrayal in the included comic.

As far as the figure goes, I like the tooling for the torso, arms, and legs, it worked for Flash, it worked for Grand Slam and the HISS Driver, and it works nicely here, too. I do wish they had been able to use the smooth chest for his torso, it might have better resembled the classic version, but even with the quilted pattern it's not too bad. But the real gem of this figure is his new head sculpt. It has an almost Devils' Due feel to it from when he made a few short appearences in the comic, and I really like how the earmuffs are sort of built into the helmet.

Tripwire also has new lower legs which add a nice difference between this figure and others sharing the same tooling. 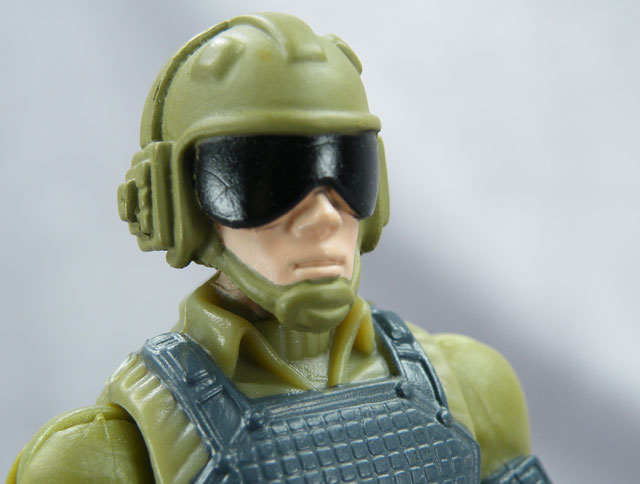 At first glance Tripwire's accessories look like more of the same, but upon closer inspection, his mine detector is a completely new sculpt and features a cool display screen, which is something that wasn't present on the original. Obviously the backpack was also a newly tooled accessory with the different backpack peg. 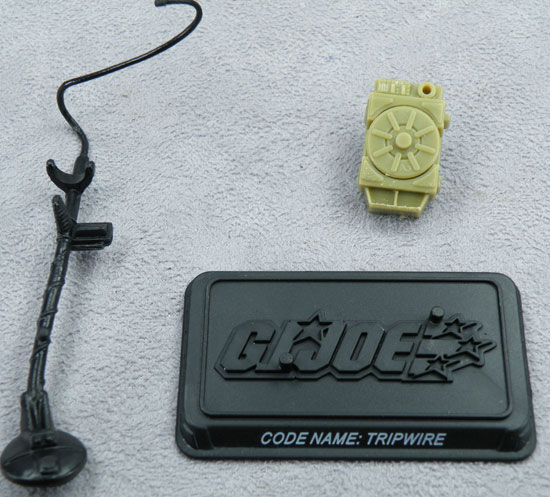 Tripwire's never been one of my favorite characters, and he wasn't a favorite figure of mine either, but this at least takes a character I don't care about a whole lot and makes him a pretty neat figure. The sculpting of this new figure is remarkably well-done and the existing tooling works very well. I do think it's actually pretty neat that a bunch of Joes now have similar uniforms for similar tasks. It gives a neat sense of uniformity for the special operations group. Overall, this is a great update to a character I wasn't wild about and made it a pretty cool one. Granted, there are about a dozen characters I would rather see than Tripwire, but it's a neat figure regardless. 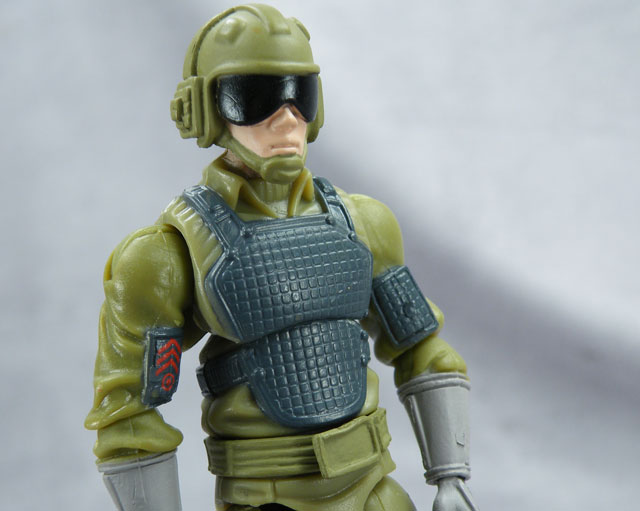 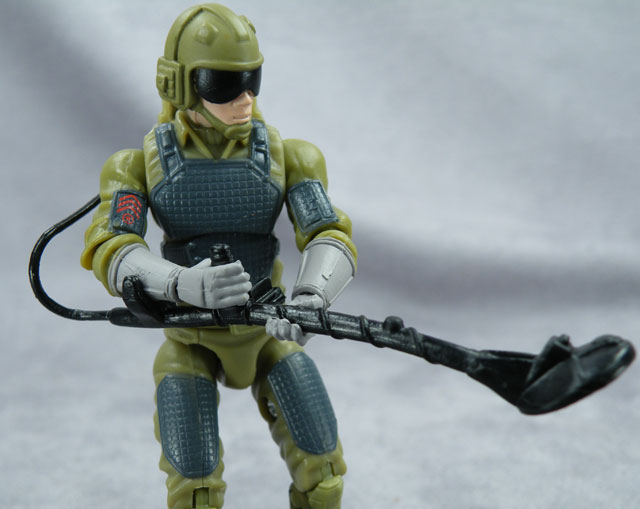 As everyone knows we've been getting absolutely inundated with different versions of COBRA Commander, and honestly it's been getting somewhat tiresome, even to me, who is someone that defends Hasbro to the end. I know the reasons why Hasbro does it, and I accept that a large chunk of the issue comes through the retailers, but the fact remains, that there are so damn many versions of COBRA Commander that it's almost rediculous.

That being said, if we're getting flooded with versions of a particular figure, it's nice to see things changed up a bit, and they are changed up quite a bit with this version of the character, and frankly, it's AWESOME. This figure takes a character that's been rammed down our throats and turns it into a very cool, desirable figure that celebrates a very unique look to COBRA Commander's mythic history. 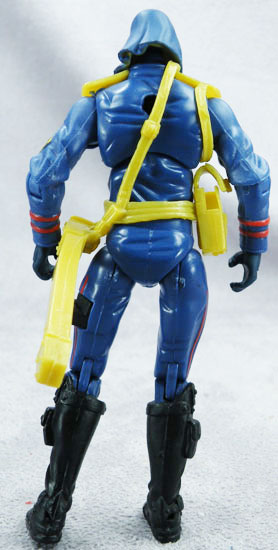 Back in the 90's, COBRA Commander underwent a more regal uniform change, appearing that way in the Battle CORPS figure line and in the comics, wonderfully illustrated by underrated comic artist MD Bright. I loved the way he drew COBRA Commander, and I loved how the design was portrayed on the comic book page. I am really amazed at how well the Crimson Guard tooling translates to the Commander. I've heard many people say they wanted to see the Crimson Guard body used for COBRA Commander and really didn't think it would work well, but I'm glad to see I was proven wrong. COBRA Commander looks very, very good.

Even with the same head sculpt as we've seen back in the day, the sweeping hood looks great, and very "Bright-esque". 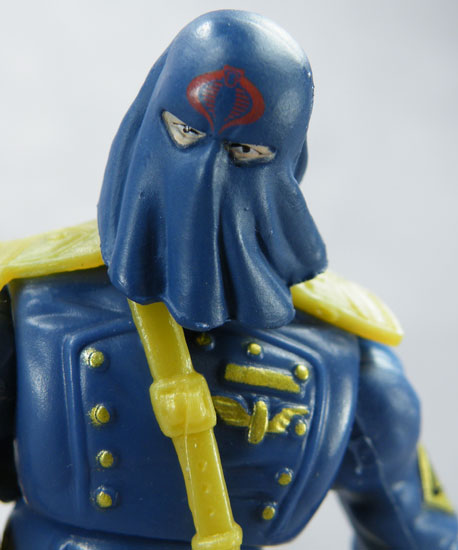 Along with the Crimson Guard tooling we get some new gold webgear and a new cloth cape that just round off COBRA Commander to perfection. Yes, the sheath is quite a bit oversized, but the shoulderpads, chest strap, holster and sheath are all very cool and add a nice air of "ceremony" to the figure and the character. The other gold trim throughout also gives him some nice color and nice feeling. I really love that cloth cape, too, and am very happy they went with cloth instead of plastic, it works remarkably well. 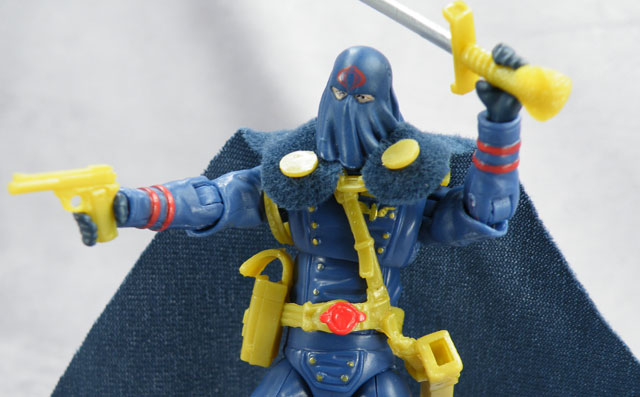 As for accessories, COBRA Commander comes with his cape, a pistol, and an awesome sword. The sword has a cobra sculpted into the hilt, and I really love how it looks. There aren't a ton of accessories here, but they all compliment the figure well.

While the included comic is a bit bizarre, with a very "kiddy" feel to it. The story involves a new forcefield technology and COBRA Commander's self-destructive battle helmet. It's a strange little story with more than a little humor, but all in all, not the best of I've read. The art is somewhat mediocre as well. But thankfully the figures are actually pretty decent. With a smattering of new tooling, Hasbro gets some decent mileage out of existing parts and we end up with a couple of pretty neat updates. 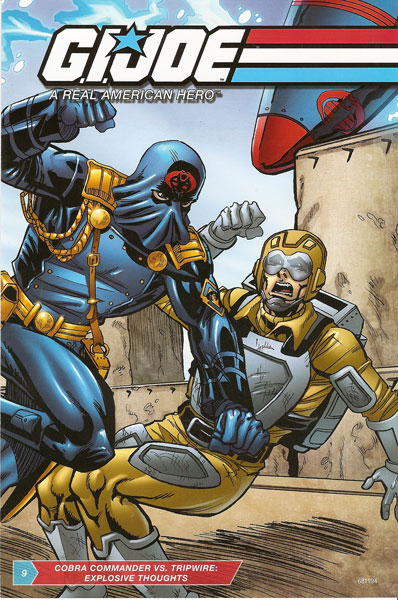 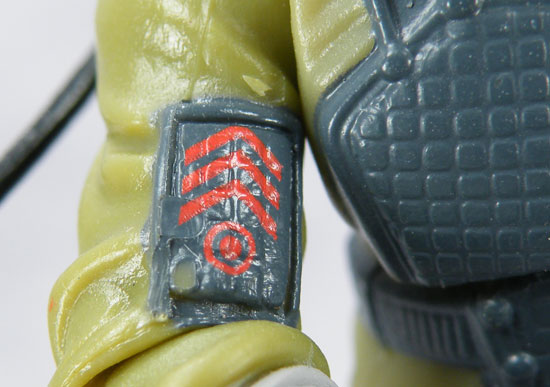 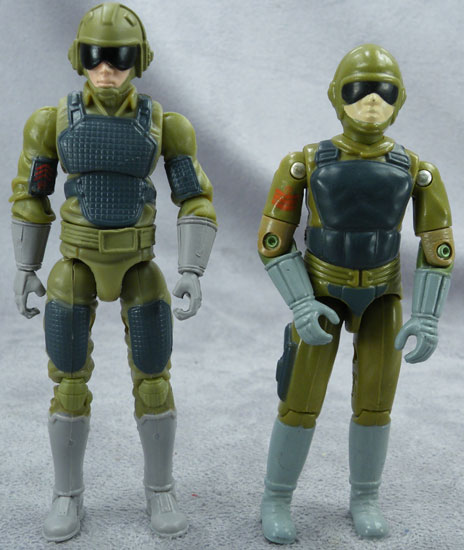 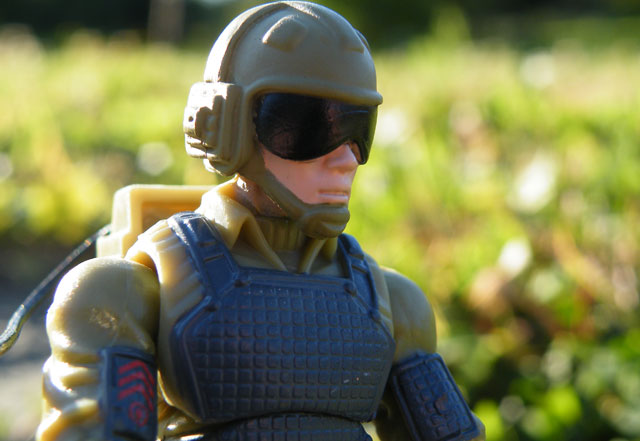 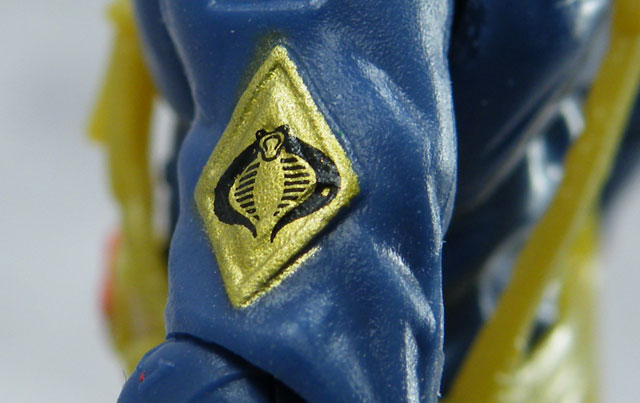 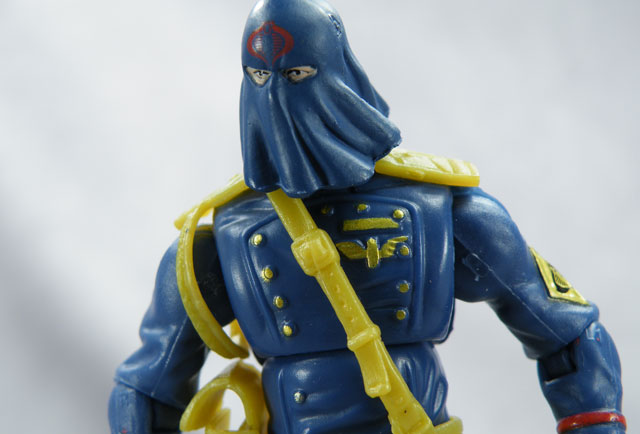 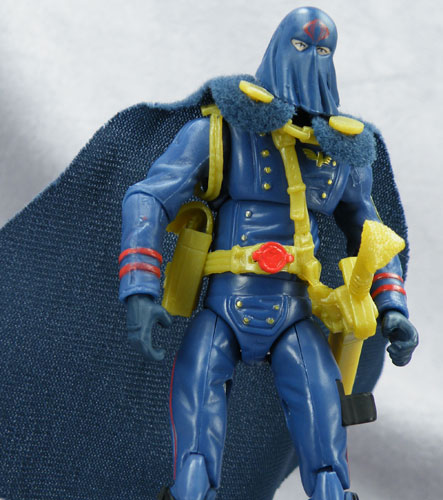 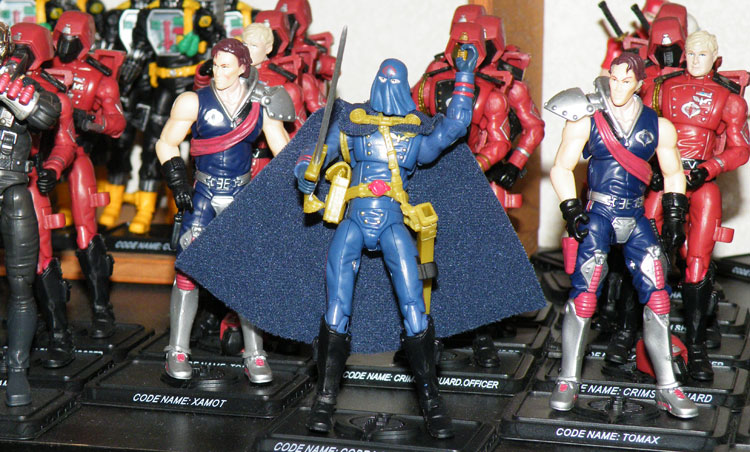 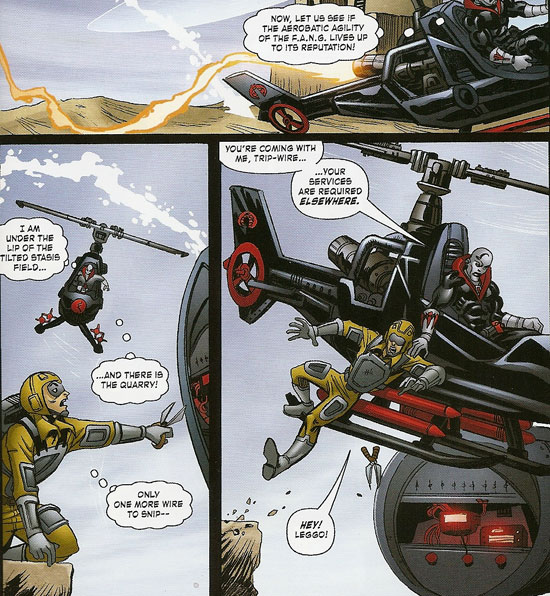