Who would have thunk it? With how much the adult fandom has been driving the production and sales of the 25th Anniversary line, who would have expected Hasbro to actually work a COBRA La character into the line? I applaud them for it myself, especially a character like Nemesis Enforcer/Immortal who looks a LOT more imposing here than he did back in 1987. I was quite pleased to see Falcon getting some love, too, though the end result is a lot more mixed than I would have liked, considering Falcon's one of my favorites.

Ah, Falcon...such potential lost. Don't get me wrong, this isn't an awful figure by any stretch...it's actually fairly decent, but has some fatal flaws. First of all, are those dreaded "Duke Arms" that so many people are getting saddled with these days. Now Hasbro as promised to fix those along the way, and according to Wal-Mart leaked lists we're getting a single-packed Falcon next year. But that's not even my main issue. I don't think the Duke arms should have been used at all...why not use the Tiger Force Flint arms? The original Falcon had short-rolled sleeves. Yes, he had bare hands (not the gloves that Flint has) but still, I would rather have seen those far, FAR better arms used rather than these Duke arms...and even changing these to the new Duke arms won't help my feelings on that much. Flint's arms are so much better in sculpt and range-of-motion, that I really think it was somewhat short-sighted not to just use those in the first place. They seemed to simply go with what was familiar and toss the same old Duke arms on there, and that really is a shame. Falcon would have really benefited from the others.

But that's not my only issue...I'm also not wild about the head sculpt. It looks like the sculptors were kind of going for the square-jawed Movie look, but the end result just doesn't look flattering. He's got a somewhat flat, broad face that just doesn't look like Falcon to me. It's not terrible, but it's certainly not great. And unfortunately those two negatives impact the figure from a sculpting perspective.

As far as the paint applications go, his green and black is quite a bit brighter than I would have liked, and the camouflage pattern looks fairly haphazardly applied. It's not horrible, but it doesn't really fit the way the classic looked, but it doesn't look realistic either. His neck scarf as a separate piece is understandable, but it also kind of rides up a bit on his neck, and sometimes takes some work to get it to sit right and look good.

Of course with all of these complaints you'd think I absolutely hated the Falcon figure, but I don't really. It's not a bad one all told, there are just a lot of little question marks and issues that I have. I think he looks interesting (certainly a lot better than the DTC version) and he's got some merits, but there are some negative points that need discussing, too.

I think the Duke parts work well for most of the figure, but the addition of the new lower legs was a vital one and it makes a big difference with the overall figure. The webgear, while not being 100% true to the original is a fantastic addition, too, it fits well and I love the detail of the walkie talkie and the pouch sculpted on to the straps. All in all, the figure IS nice. Quite nice. But I had my hopes up really high for a kick-ass version of one of my favorite Joe characters, and it does not live up to those expectations at all. 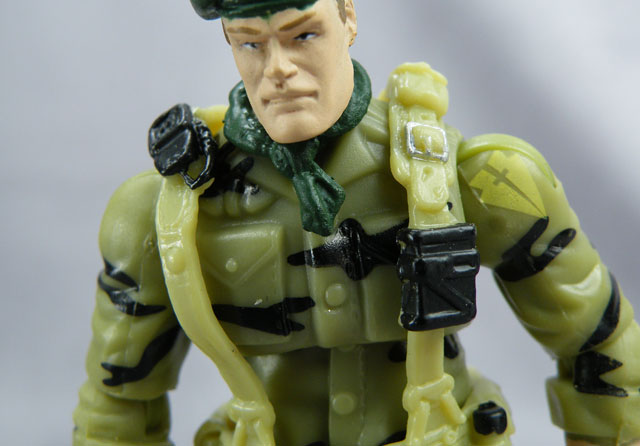 Now from an accessory standpoint? Well, from that perspective, it took my expectations and completely blew them away. Falcon's accessories are simply fantastic. Hasbro took the overall design of his backpack, but separated it into multiple parts, with a backpack that opens and a removable radio, with the familiar bent antenna. The knife comes off like it always has, and the end result is a very, very cool new backpack along the lines of the excellent packs we got with Storm Shadow and Firefly in the last wave of Comic Packs. Very impressed with those. 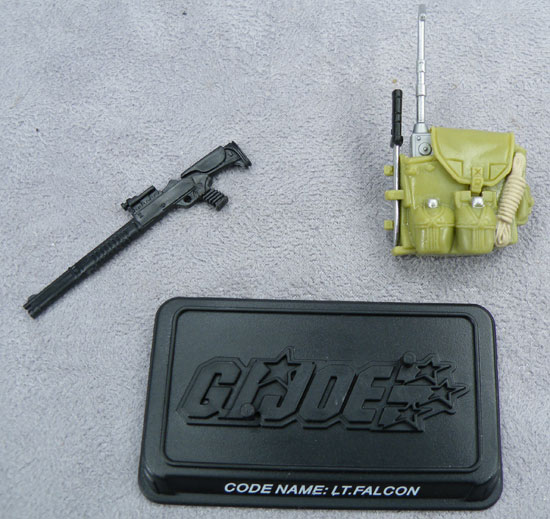 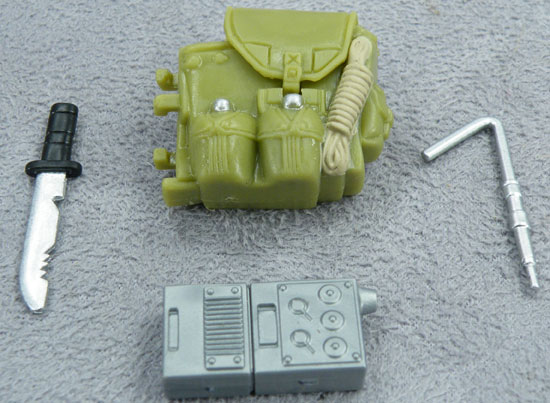 A decent figure, that unfortunately doesn't meet my personal standards for a Lt. Falcon, and some terrific accessories. So far, not too bad, in my opinion. But what about the infamous Nemesis Enf... errr... Immortal?

I'm sure people are going to assume that just because I love all the weird stuff in G.I. Joe history that I'm just automatically a COBRA La fan. Well, that is definitely not the case. The movie ranks pretty low on my list of accepted mythologies, and I detest the whole idea that Cobra La was somehow the secret inspiration for the COBRA organization (and that COBRA Commander was some sort of ancient reptile man before he donned a silver battle mask).

That being said, I still think the Cobra La concept is fairly cool, but unfortunately the toys back in 1987 all failed pretty miserably. None of them really portrayed a sense of power or fear that a race of ancient insect-men should have, but part of that is probably a factor of the technology and resources they had back then. Well, things have improved. 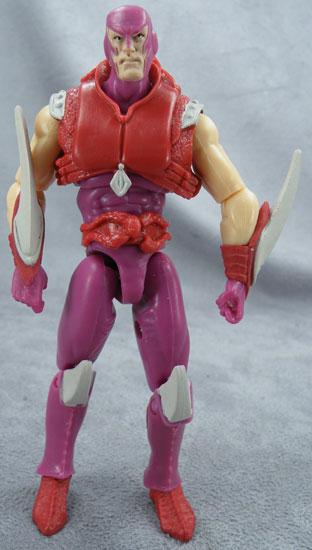 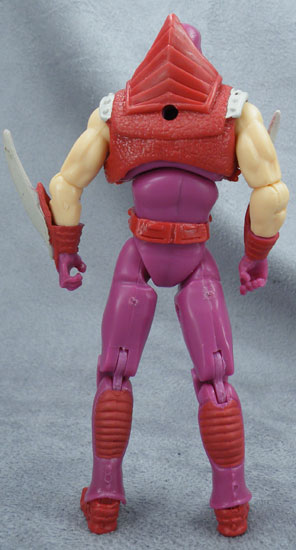 Underneath the bulked up armored secondaries, there's a Serpentor figure, but it's barely recognizable with all of the additional parts, and that's a great thing. It's nice to have these somewhat blank templates that can be used by Hasbro designers to kind of go in any direction, and they definitely went in a good direction here. The new head sculpt is appropriately sinister and menacing, the torso armor is impressive to say the least (I absolutely love the sculpted raised "backbone"!) and the addition of the spike-elbow gauntlets was genius. I love the textured belt, the knew lower legs, and even those pointy, scaled feet. Absolutely great, great additions to a fairly bland figure that give you something totally new.

The best part is that as an Anniversary figure, Nemesis towers over other figures, especially those of the vintage style, and that is a great thing, really helping make him look nasty and powerful. Nemesis "Immortal" finally has some street cred, and this is a great version of a character that many Joefans would like to forget.

That being said, everything is not wine and roses. From an appearence perspective, it's great. From a functional perspective, there are some minor pratfalls.

First and foremost, the large figure's hip joints seem a bit loose. While that's not a huge deal, once you put those monster wings on him, he has some trouble standing, even with his battle stand. That's the first issue... the next issue has to do with the aforementioned wings. 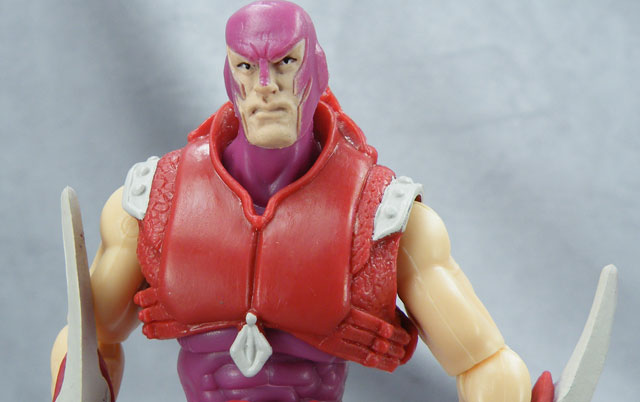 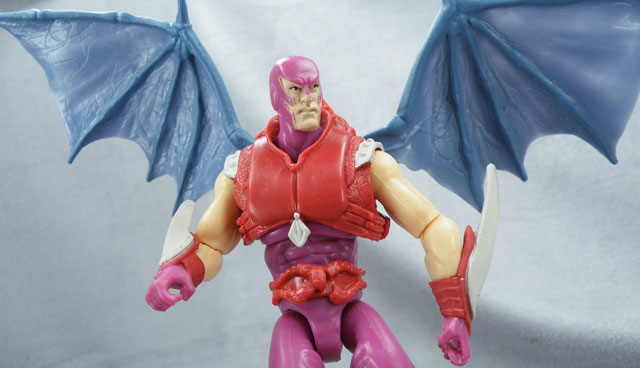 As I mentioned, from a looks perspective the figure is fantastic, including the wings. Veins, rippled leather...it's all perfect, I love it. But the wings are a bit on the rubbery side and do have some minor issues fitting into the backpack attachment. Because of this, they don't pose exceptionally well, and if you fold them back, the figure simply will not stand, even when on his battle stand. And standing without a battle stand at all? Forget it.

So, I love the way the figure looks...but I do wish some of the joints and such were bit firmer and tighter, for a more versatile, displayable piece.

Really, though, these are minor complaints for what is otherwise a very cool figure with some pretty neat gear. 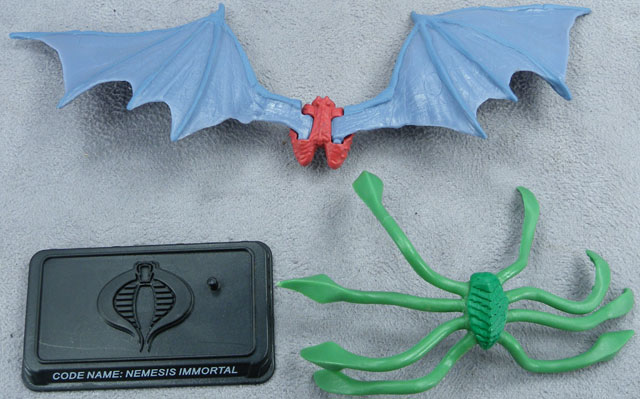 Good ole Nemesis Immortal comes with his tentacles as well as the bat wings, and the tentacles are much improved over the originals as well. Really great detail, they are impressive, to say the least, even though I will not use them very often, if at all.

All told, this is a very cool figure for a comic pack that ends up being pretty fun, even with some lackluster issues with Falcon. I enjoyed the comic, I enjoy both figures...what else can you ask for?

Speaking of the comic, I was wondering how Larry would work in the Cobra La connection, and the answer is...well...he didn't really talk about it. We're just meant to assume there's been some Battle of Cobra La II and that COBRA La is still fighting against the Joes. Even though we get little to no backstory, the comic is mostly a story of Nemesis stalking Falcon and them facing off, and I found it to be immensely enjoyable. Falcon tries numerous ways to kill the menacing monstrosity (some of them quite surprising for a kid's comic) and the end result is a quick-paced, battle-filled, fun 22 pages of story. Not so bad. Ultimately my favorite Comic Pack out of the wave, and if it's a sign of what's to come, I'm excited. 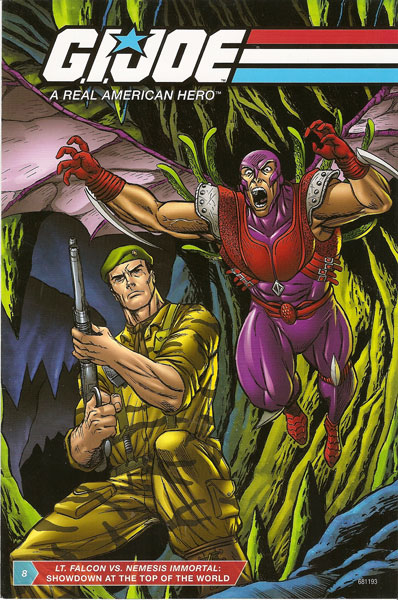 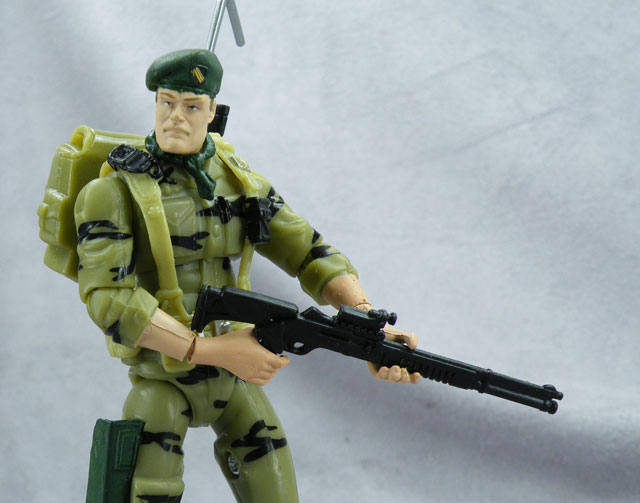 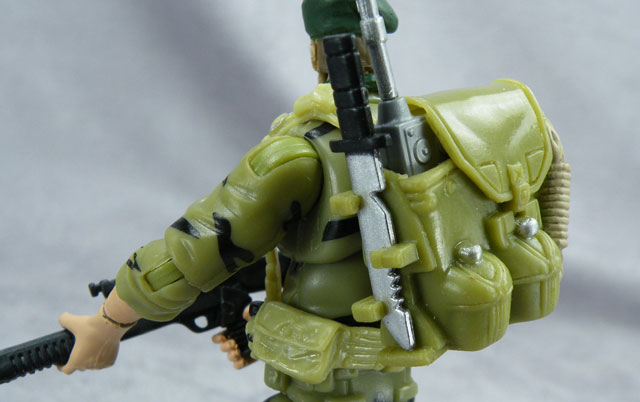 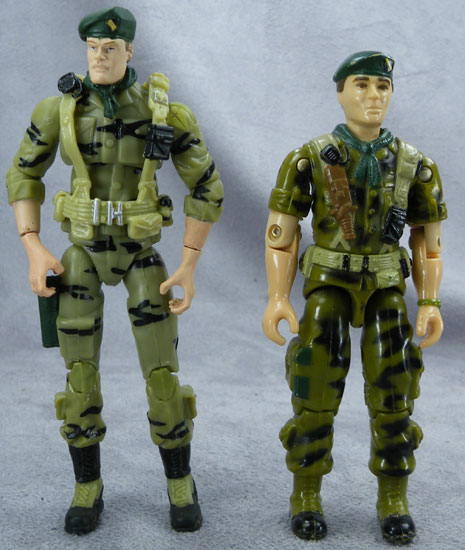 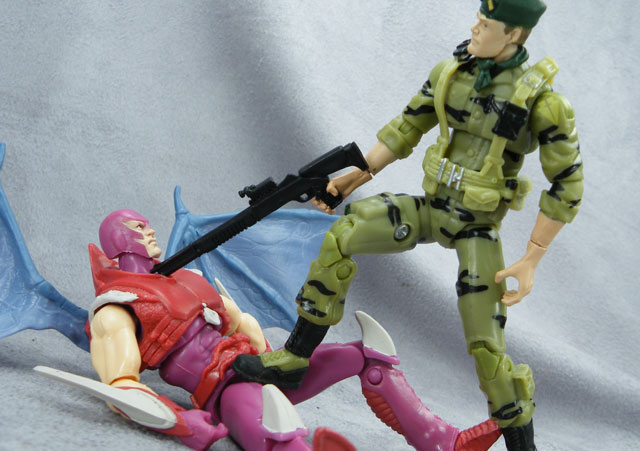 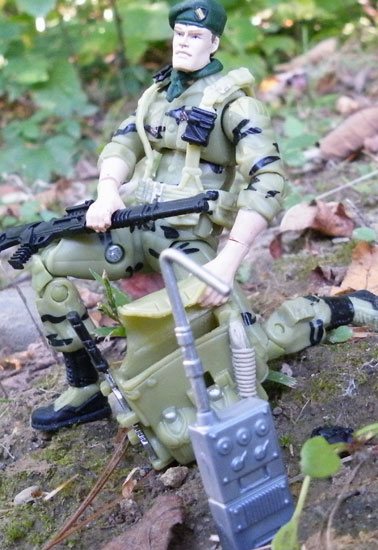 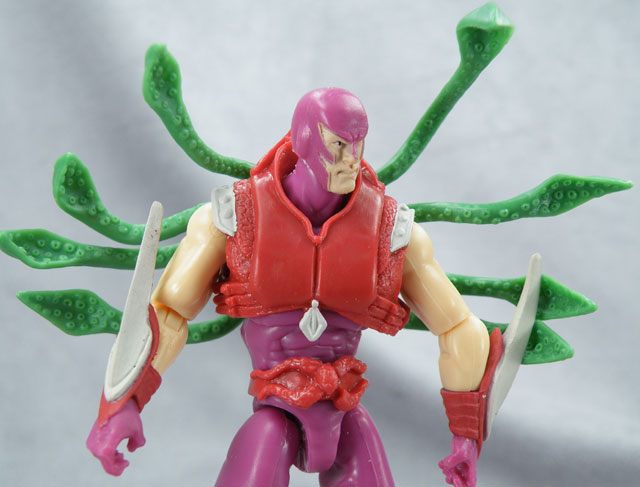 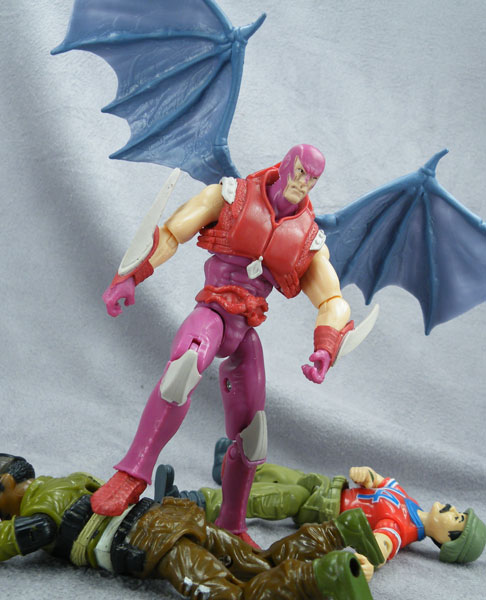 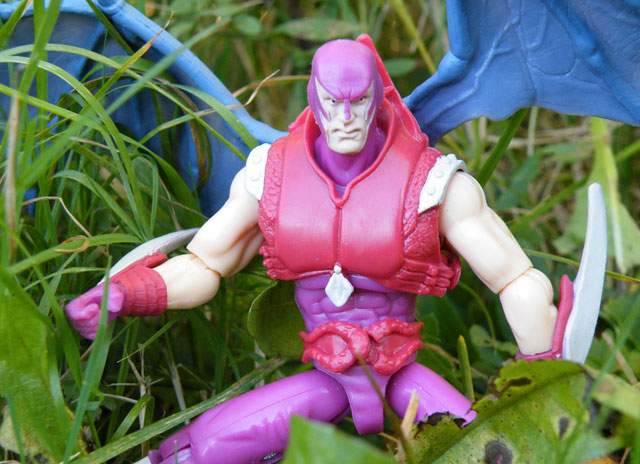 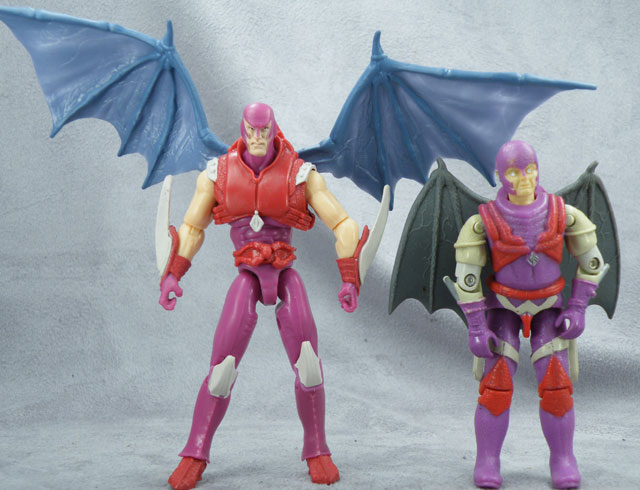 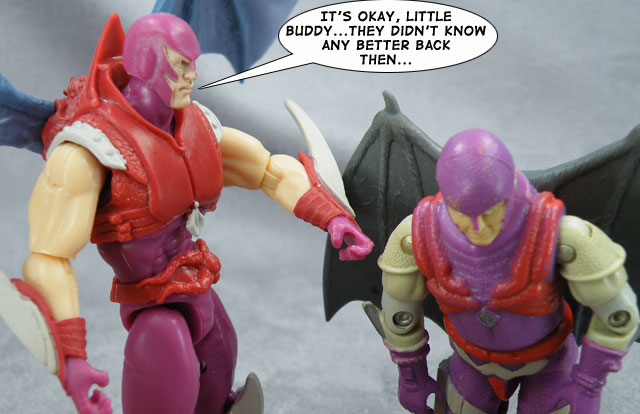 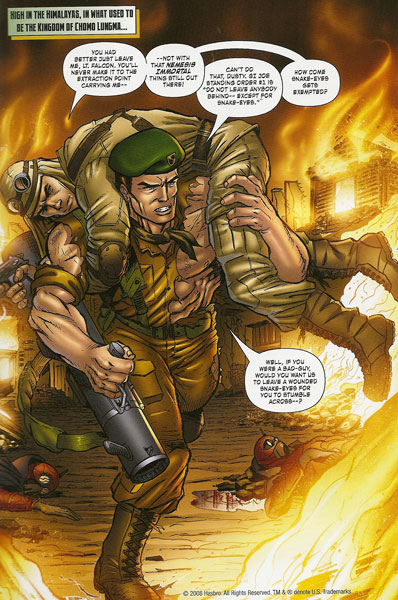 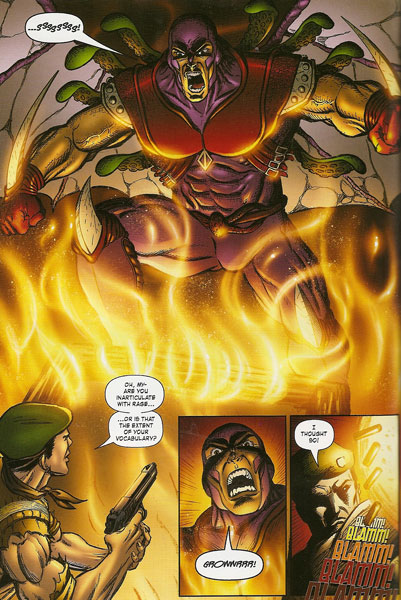 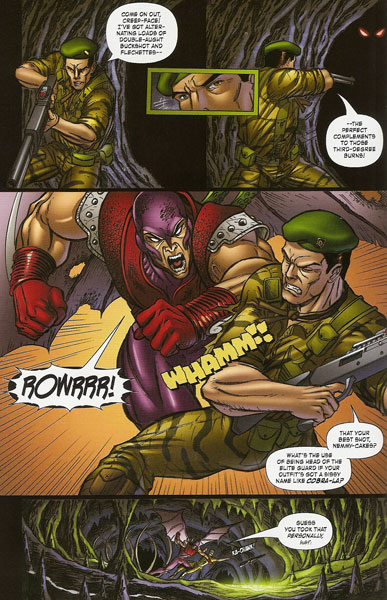