Hasbro has made it their mission to take existing parts and make new things out of them, and they’ve been fairly successful at it to this point.  It’s amazing just how versatile some of these parts and pieces are, and if you’d told me a year ago that Roadblock would be converted somehow into a Copperhead, I would have said you were nuts.  But they find a way to make it work, and not just make it work, but make it work well. 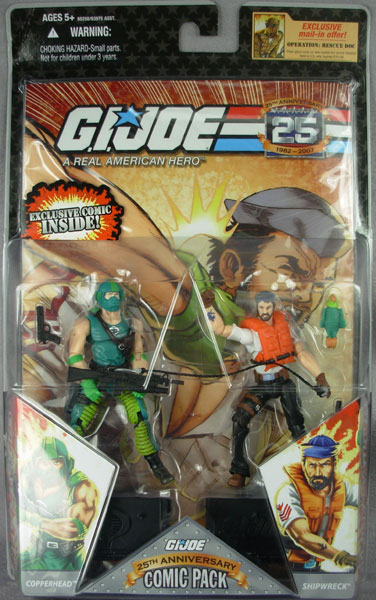 The COBRA Swamp Specialist’s torso and arms are straight up Roadblock, as he first appeared in the 5-Pack last year.  That has its good and bad points as he comes across as being very large and muscular (which is a good thing, I think) yet ends up with some twisted and contorted hands that have become infamous with Roadblock.  Thankfully, though, the weapon that Copperhead comes with actually lends itself fairly well to being held in those hand positions, so it’s not such a bad thing and works better than the original Roadblock even works, I think.

But Copperhead would not be Copperhead without his familiar uniform pattern, so we should talk about the NEW tooling we got here.  First of all, the head sculpt is great, and is iconic Copperhead.  The helmet is not removable, but that doesn’t bother me a whole lot, as the design is retained very well from the vintage version of the character.

The legs (and belt) are also new, and are translated exceptionally faithfully from the original figure that appeared almost twenty-five years ago.  As an added detail, we got some very nice paint wash across the pads on his legs which adds some great detail and depth, and gives him a somewhat “swampy” feel.  Very cool, I would have to say, even if Copperhead isn’t necessarily one of my favorite characters.  What do you think, Fred?

For the most part, I agree with everything that you wrote above.  Honestly, Copperhead was never really a figure that I was all that excited about and, up until about 3 years ago, I never owned even the ARAH version.  This figure is a pretty decent translation of the original uniform considering that it utilizes some previously existing parts.  I am getting a bit tired of the arms that have the elbow bands that we’ve seen used in both the original Gung-Ho and Roadblock 25A figures but endless reuse of parts seems to be part of the new reality for GIJoe.  Oddly enough, the one detail that Justin and I are going to differ on is the paint wash on the inseams of the figure’s pants.  While is upper torso looks “clean and pressed” the wash on the inseams just doesn’t look right to me.  The impression is that Copperhead ran in to change his shirt before getting his picture taken and didn’t realize that the photographer was opting for a full body shot.  (Or, as some folks on the forums are fond of saying a “full frontal” shot.  Perverts!)  So, while the paint wash helps to bring out the details in the molding, I just find the “dirty wash” to be a bit unnecessary.  I do agree that it’s time to develop some new gloved hands as the Roadblock left hand is getting a bit tired at this point. 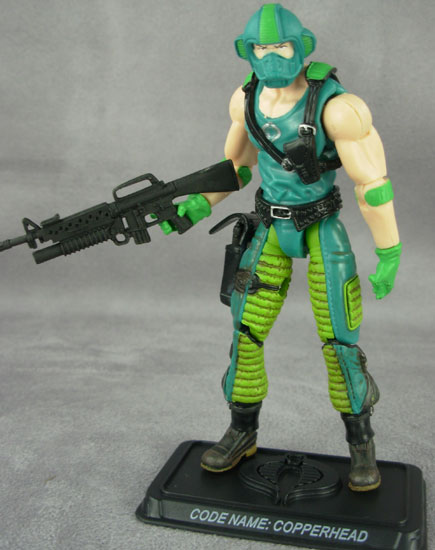 Copperhead doesn’t come with a whole lot in the way of accessories.  He’s got the nice chest holster with strap that is fairly small, but well sculpted and a nice homage to the vintage look of the character, and also comes with a nice machine gun and pistol as well.  Nothing overly remarkable, but some solid gear to compliment the character well. 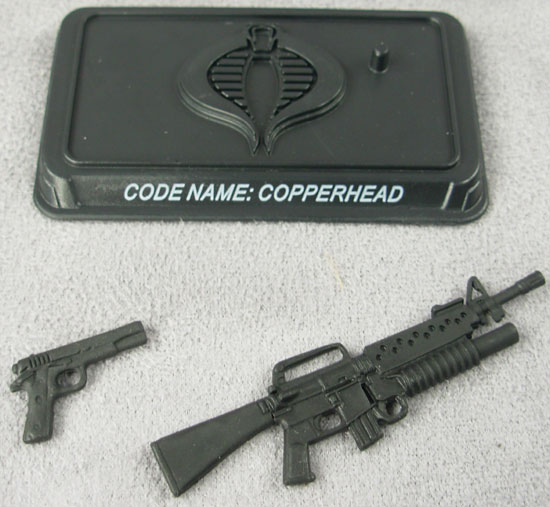 Here’s the funny thing about Copperhead’s kit—it’s a great variety of accessories than the original figure had.  No matter what, Copperhead has traded up a bit in terms of his armaments.  Yes, we’ve seen both of these pieces before but they seem to work well for a character that always seemed a bit more about “brawn” than “brains”.  I do miss the large knife that came with the Collector’s Club version but Marauder Gun-Runners makes a perfectly serviceable machete that should fit perfectly in the figure’s right hand. 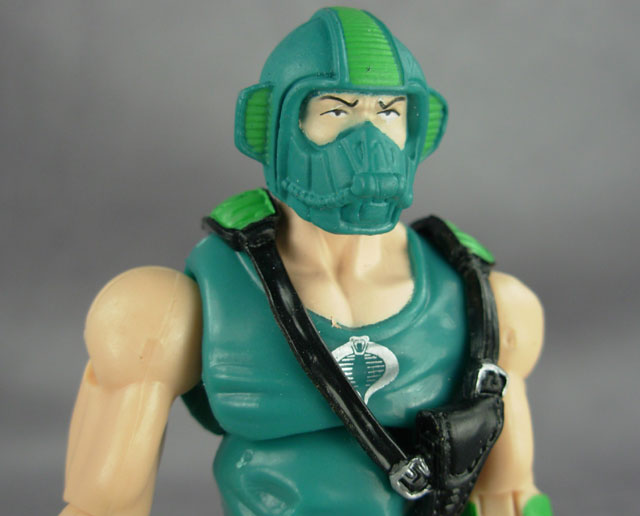 Shipwreck has never been one of my favorite characters, but I really, really liked the original version of the figure in the Anniversary format.  It really captured an animated style and added some great character to someone who I’ve always considered somewhat forgettable.  Unlike most other Joe fans, I actually really loved the clenched fist, the sculpting on the torso, legs, and arms is all great.  A very cool figure, and I don’t really mind seeing it reused here, even though a lot of folks would have rather seen Cutter.

There isn’t a whole lot to talk about with this figure, since it’s a straight-up repaint, but I do like the paint applications here with the dark pants and white shirt.  It adds a little flair to the figure.  Another added detail is the improved tattoo on his arm, which is a great difference from the original(s).  What do you think on this repaint, Fred?  Worthwhile?

Honestly, I don’t really think this is a worthwhile repaint.  In developing the color scheme for this figure, Hasbro pretty much just loaded a picture of the first version into an image-editing program and then hit the “invert” function.  What was dark is now light and was light is now dark—that’s pretty much the extent of the changes.  Yes, the figure’s boots, belt, and gloves are now brown but his hat is navy blue—which just doesn’t look right to my eyes.  Also, the figure’s skin tone appears to be lighter than the original single-carded Shipwreck figure which, when combined with his white shirt, makes him look just a bit pasty.  Honestly, when is the last time that anyone ever saw a sailor who appeared to have so little exposure to sunlight?  I applaud Hasbro’s attempt to tweak the design enough to justify the re-release but this just doesn’t cut it for me.  (It is important to note that his face is not painted but rather mold in the flesh tone!)  As much as I like Shipwreck, this figure is unfortunately a “pass” for me. 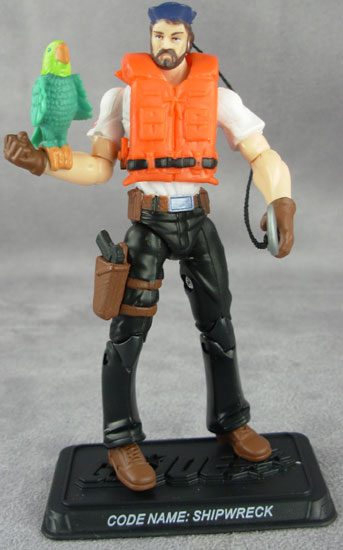 Along with the adjusted paint applications, Shipwreck also comes with a couple of new accessories.  He’s got the same parrot and pistol, but he’s got an additional life jacket with a hook line that clips to the back of it and does a nice job of simulating the weapon that Shipwreck came with originally (though it’s considerably different).

A couple of nice new accessories with some different color schemes and you end up with a nicely updated Shipwreck…sure, a new Cutter would have rocked even more, but this is an okay update and the comic was pretty cool as well.

Shipwreck is one of those “love him or hate him” characters.  Fans of the cartoon love the character while die-hard fans of the comic series don’t understand his appeal.  As a fan of both, I can appreciate Shipwreck as a character and the same holds true for his comedy sidekick Polly.  I do like the inclusion of the hook and line with this figure as serves as a bit of homage to the original ARAH version’s included gear.  The included life vest is a fantastic piece of work and one that I’d hope to see on a future release of Cutter!  (HINT!  HINT!  C’mon, I know that this must get through to the gang in Pawtucket!  He’s even a Red Sox fan!)  Honestly I think the included gear is what ultimately saves this repaint from being considered completely superfluous in my eyes.  If this were a single-card release, I’d be hacked off but since he’s included in a comic pack, I’ll find SOMETHING to do with him in my collection.  (Unlike the poor Headman repaint from GvC which hasn’t left the jail cell in the Cobra Mountain playset in almost three years now.) All in all, this is a decent comic pack with a new character and an interesting look at an existing character.  The comic itself is pretty entertaining as well, sort of existing in the current “Joe” continuity, with Shipwreck piloting his familiar Piranha attack boat and Copperhead cruising in a Moray Hydrofoil.  The USS Flagg is also present along with a few other Joe Navy members like Torpedo and Admiral Keel Haul.  All in all, it’s a very entertaining book, even if it’s not exactly clear when and where it “fits”.  The story itself is seamless and could exist anywhere or any time, so in that way it’s pretty neat, and the figures add to that.

A very cool set that I’m quite happy with.  I’d recommend it to anyone.

If I sounded a bit harsh in my comments above let me state one simple fact: this comic pack is far superior to all of those released in the first wave.  Yes, I’m not entirely thrilled with the colors used for Shipwreck but he’s got a swanky new life vest and hook & line.  Sure, Copperhead looks like he spilled a cup of coffee in his lap but I still prefer him to the “retina-burning” version of Cobra Commander that was released in 25A comic pack #24.   (I can still see that figure when I close my eyes—and not by choice.)  Hasbro made a smart choice with this particular set in the fact that they released one new character and one popular previously released figure in the same set.  I don’t know too many fans that are going to complain about having a second version of Shipwreck just so that they could purchase Copperhead.  The inclusion of a new Larry Hama comic just sweetens the deal because, even after 25 years, his Joe stories are far superior to anything seen in the drudgery that Devil’s Due calls “World War III”.  I still consider this set to be a pretty darned good value and think that a great many fans of the 25A line are going to agree with me on this. 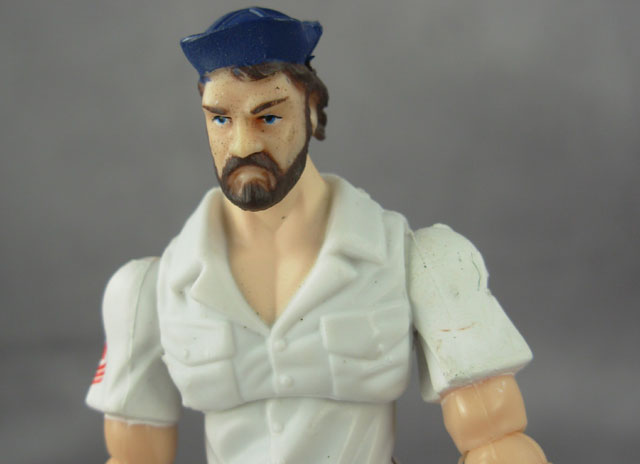 I think fans will dig this comic…it’s a fun story with no far-reaching implications, but it can easily fit within whatever continuity you so choose.  Shipwreck uses his Piranha attack boat from the Valor Vs. Venom line, so it could fit in there, but there is also a healthy dose of Real American Hero goodness from the USS Flagg to Torpedo, the Moray Hydrofoil, and a familiar well-spoken COBRA Commander acting as he did so much from issue #100 and on.  There are some humoristic elements, but also some neat action scenes.

Essentially the USS Flagg is in the water and a COBRA Air Attack sort of takes them by surprise.  Ace scrambles the Skystriker to combat the Rattlers in the air, but that leaves the Flagg open for water attacks.  Shipwreck volunteers to patrol the waters and runs across Copperhead in his Hydrofoil.  Torpedoes are exchanged, fists are thrown, and in the end, Shipwreck wins the fight, and glides a captured Hydrofoil back to the Flagg, victorious. 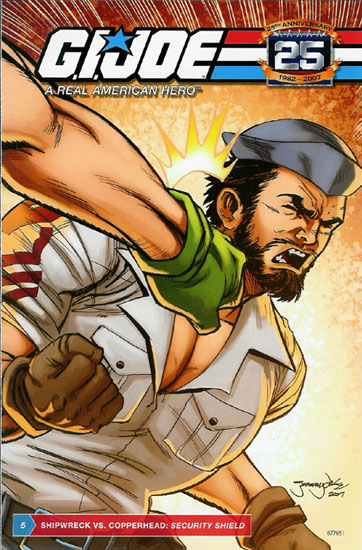 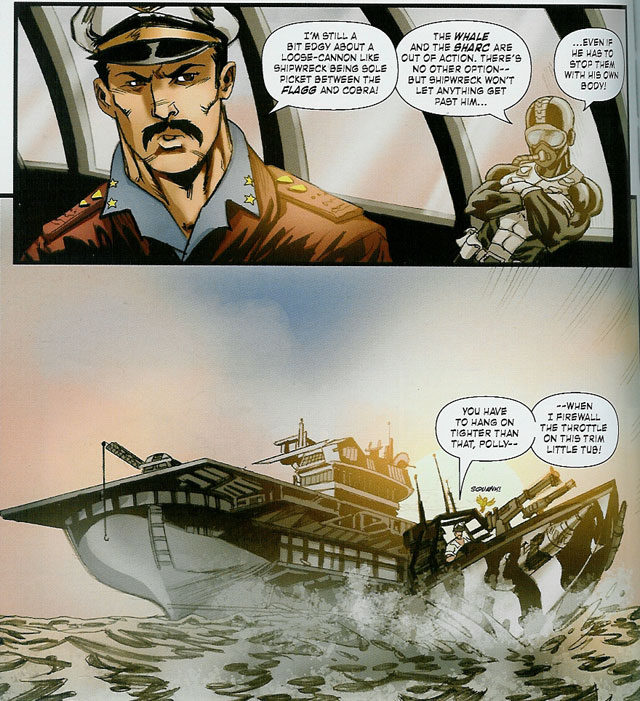 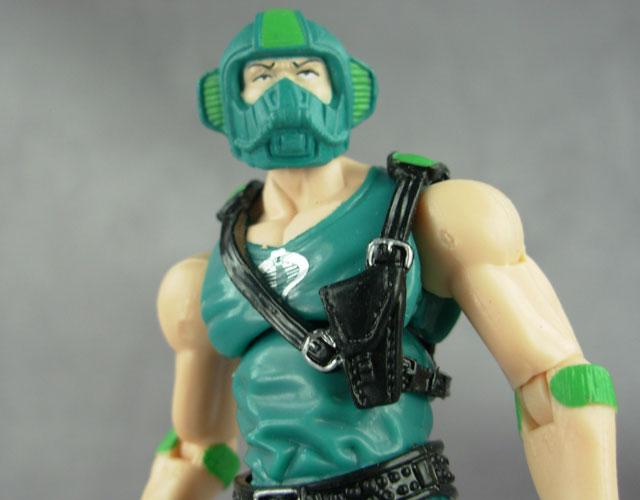 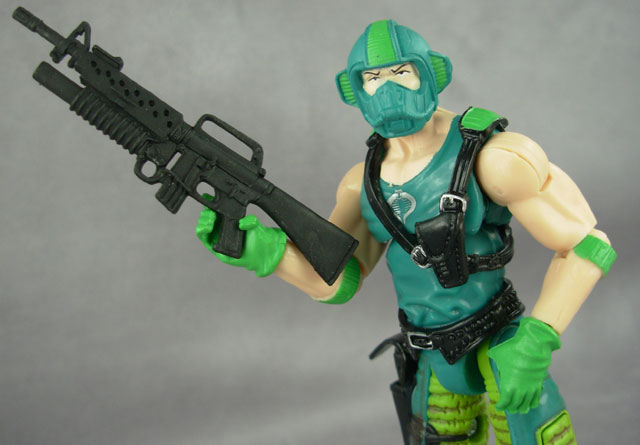 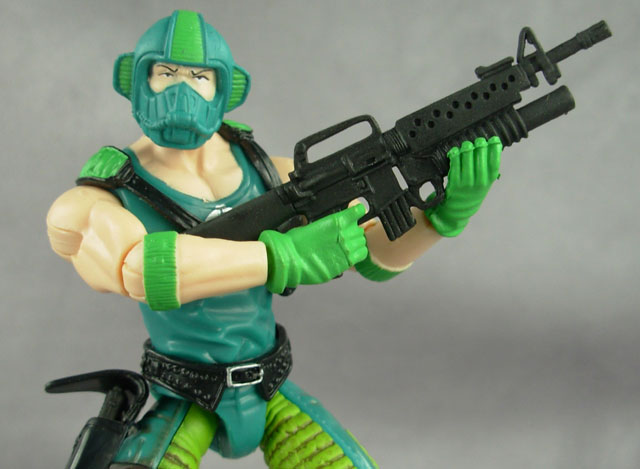 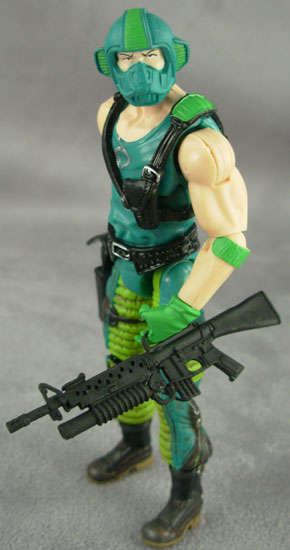 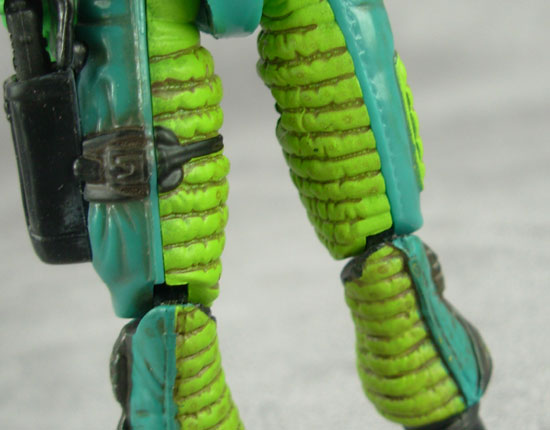 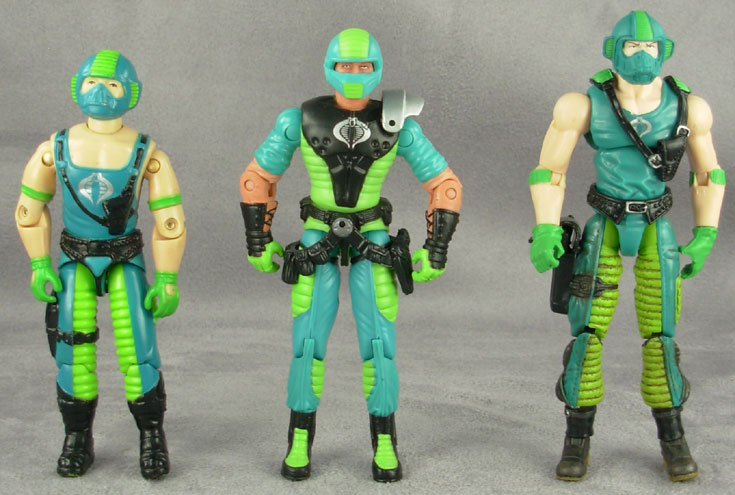 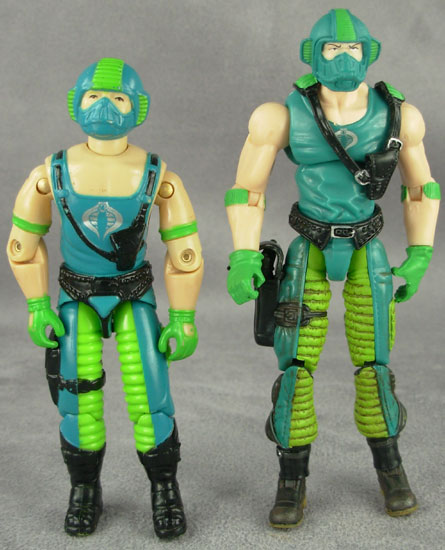 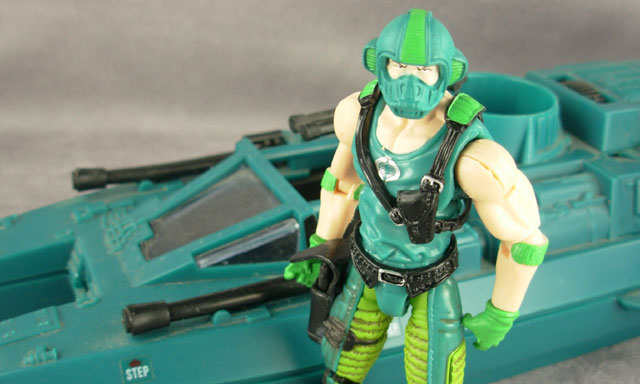 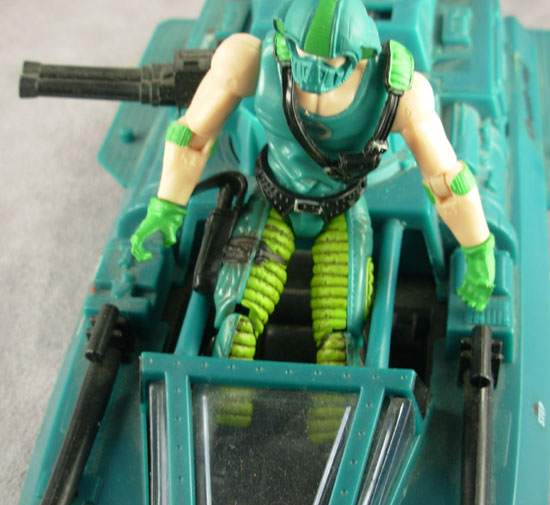 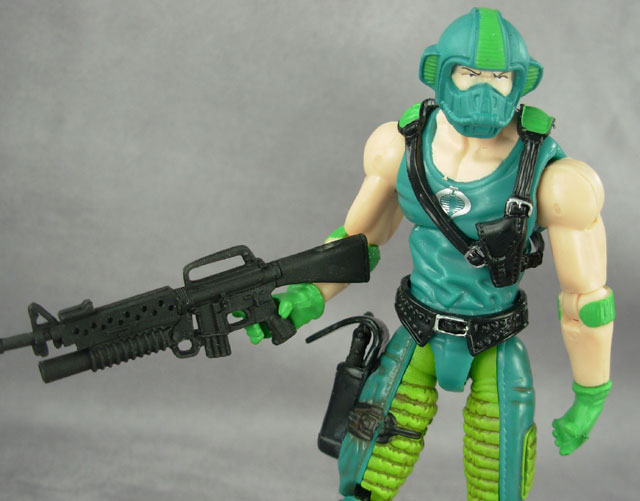 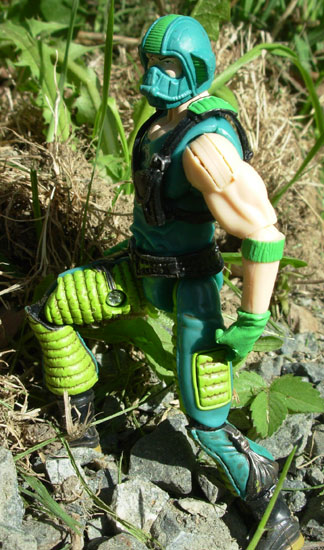 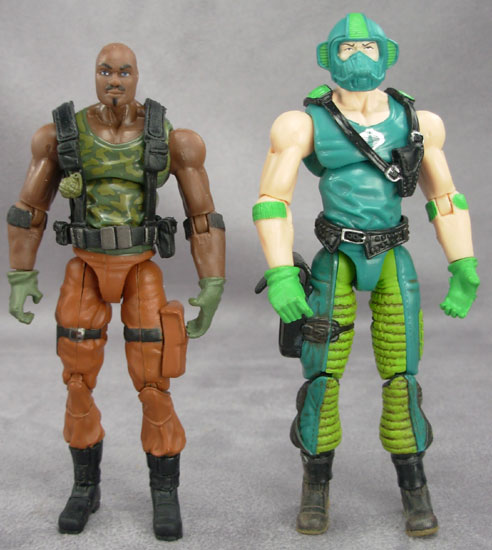 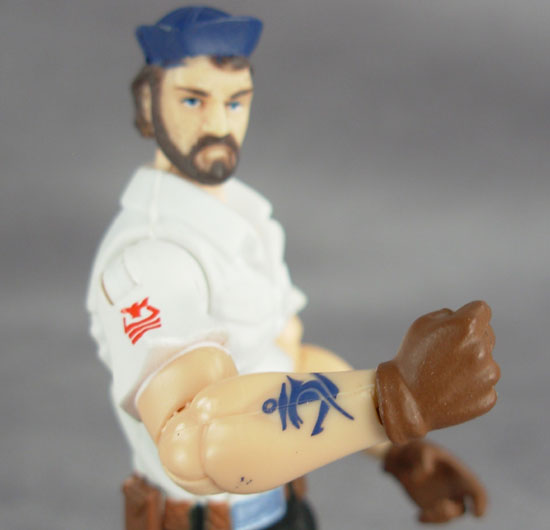 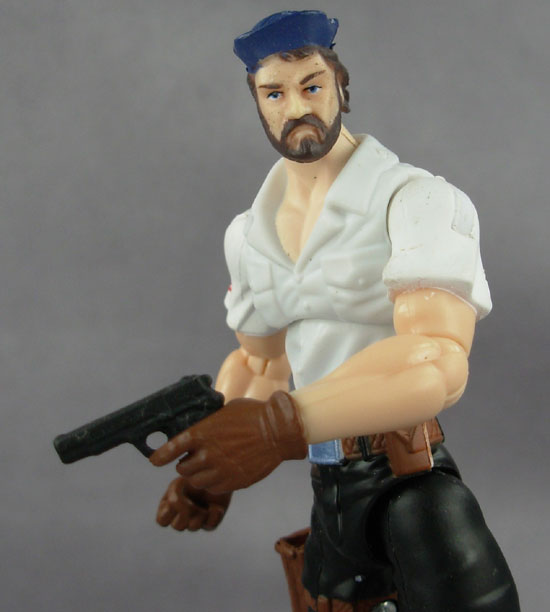 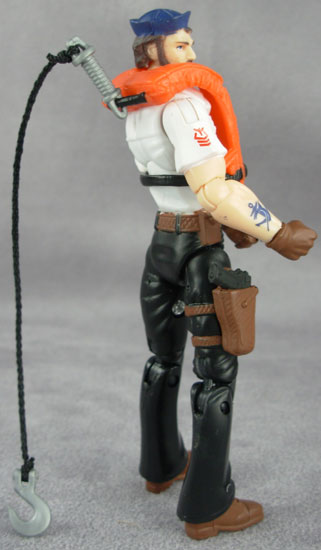 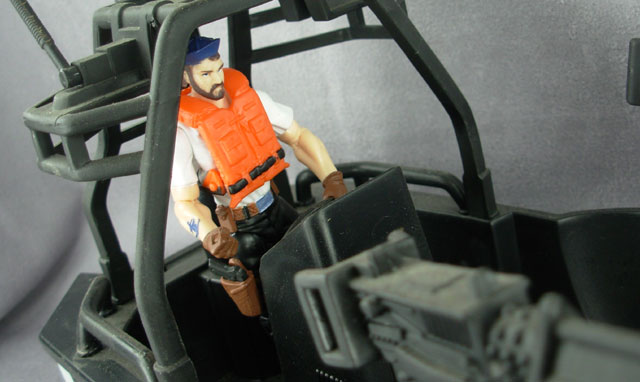 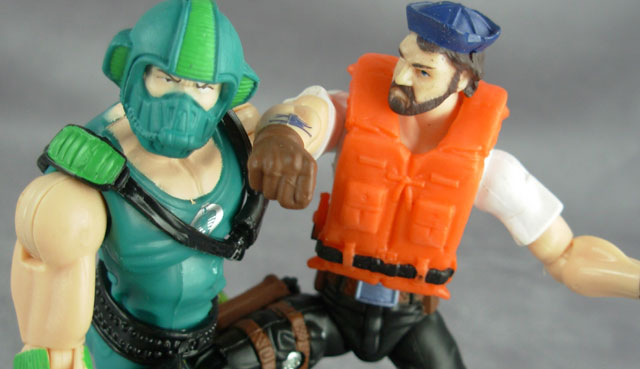 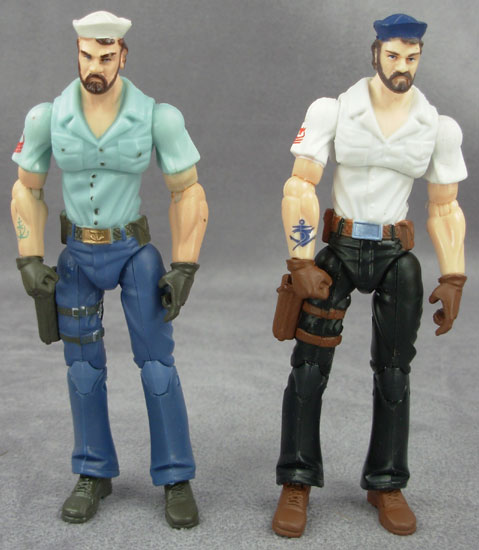 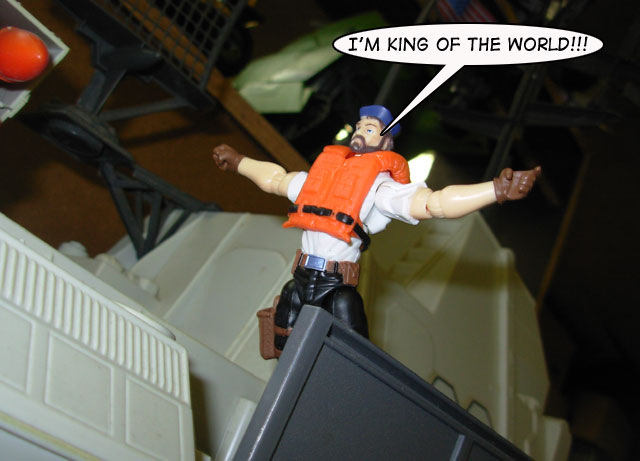