For the past few years there has been a dynamic split in the online Joe fandom between the vintage sculpt fans and the new sculpt fans, where purists of each had their own preferences and appeal compared to the other style. Now, as the 25th Anniversary stuff is hitting full bore, it seems as if conversation has shifted a bit, and there almost seems to be a NEW split. No longer are there folks clashing about vintage and new sculpts, now it's vintage and Anniversary sculpts. It almost seems as if the new sculpt o-ring items (neo classic?!) are sort of being lost in the shuffle, which is too bad. While they definitely had their share of problems, there was a ton of great offerings from 2002-2005, and this version of Copperhead stands pretty close to the top! The Collectors' Club really makes its mark on the great vintage figures they produce for the conventions every year. What is sometimes lost is the great work they've done using the new sculpts for their incentive figure each year. Last year the Nullifier ended up much cooler than I thought. This year Copperhead ended up being the same.

I'm not sure why, but Copperhead was never a character that really held much appeal to me as a kid. Maybe it was the odd uniform design, his Water Mocassin vehicle that I just didn't care for, or the fact that he got little to no characterization in the comics, but whatever the case, Copperhead just sort of got lost in the shuffle in that onslaught of fantastic new characters in 1984. How appropriate now, almost twenty-five years later, he's the last new sculpt update from that classic year.

Yeah, that's right...it hadn't occurred to me either until I started thinking of different pictures to take for the review here, but the entire COBRA ranks of named characters from 1984 has now been redone in new sculpt form. I think that's pretty darn cool. The Collectors' Club looks like they really put some effort into this figure, too, taking some new sculpt parts and really putting together a great "frankenstein" figure that strongly resembles the Cajun COBRA, yet still has some great new elements as well. 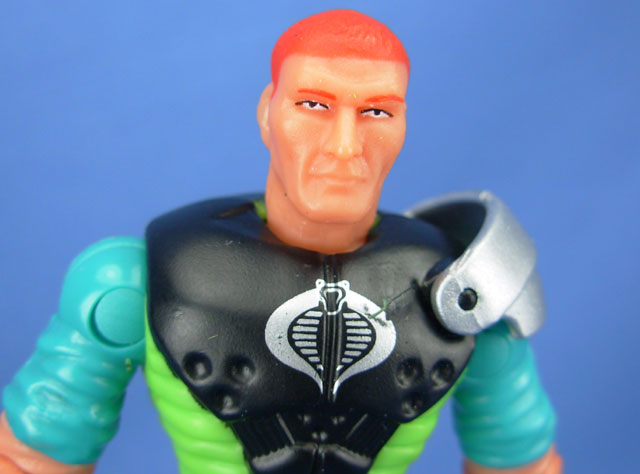 The first question everyone had when the figure was first revealed was "who's head is under that helmet"?!? That could have really had a "make or break" effect on the figure, and thankfully the Club made a great choice. The head was originally used for the DTC Wave 2 Salvo, and really has a great non-descript appearence. It works for a bad guy just as well as a good guy and I find it "fits" Copperhead to perfection. The parts used are as follows:

At first look, the parts really make this version of the figure look different, but there's nothing wrong with that. His torso stands out nicely with the new black armored plating and that strong silver COBRA symbol stands out very nicely. The textured material on his sides matches Copperhead's look perfectly, and also blends well with the same textured pads on Airborne's legs, too. The original Copperhead only had this texture on his legs, but I have no issues with that material being sculpted on his torso as well, even with these small additions, you can tell instantly that this represents Copperhead. Unfortunately my COBRA symbol ended up getting kinda scuffed in the shipping procedure somehow. Not sure what happened, but the symbol definitely got a bit chopped. It's a minor issue, and not a system wide thing, but I was a bit bummed out when I saw it.

I do have a small issue with the arms they chose, however. While those gloves/gauntlets are interesting and a neat design aesthetic for Copperhead, but using Switch Gears' arms gives the figure somewhat "wrinkly" elbows which takes a bit away from the figure, but that also feels like a pretty minor complaint in the grand scheme of things. One other complaint I have is that the figure also cannot fit in the Water Mocassin vehicle. That can't be considered an issue with the Collectors' Club, though, more an issue with the basic design of the new sculpt items themselves, which always run a bit bigger and bulkier than the vintage product. Because of this slightly larger size, though, he cannot fit in his trademark vehicle, which is a bit of a shame. 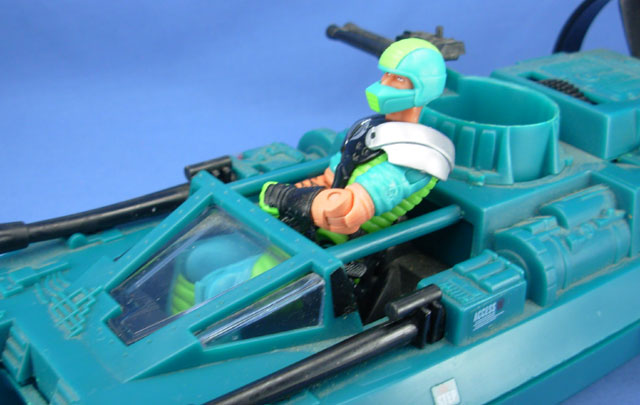 Of course one of Copperhead's most defining characteristics is his strange color scheme. A mixture of aquamarine, bright green with black and silver here and there. Each of these colors is translated excellently to the new figure. On a normal character these funky colors might be a major detraction, but to represent the Copperhead color scheme true to form, they did pretty exceptional work. The helmet, padding, overall look of his uniform is a great reproduction of the colors that Copperhead wore, even with the larger swath of black on the chest armor. It gives him an almost updated appearence, but manages to stay very faithful to the original design, which can be a tough tightwire to walk. The Collectors' Club has done it very well here. 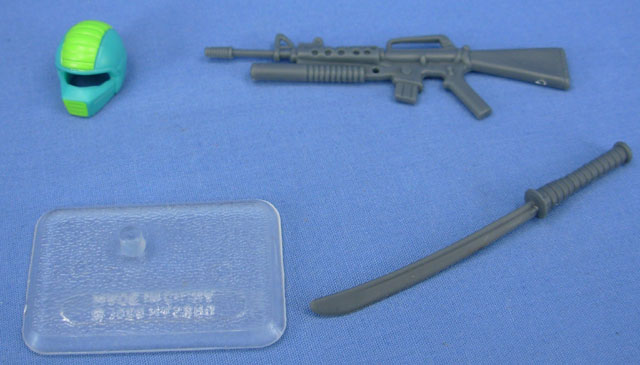 Copperhead doesn't come with many accessories per se (though for a free incentive figure, how can you complain?) but what he comes with really makes sense. He's got Croc Master's machete, which is a pretty strange looking one, but it works for a swamp fighter just the same. He also comes with the familiar M16-203 combination rifle that the Python Patrol version of Copperhead came with, so he ends up being a great update to the original even from an accessory standpoint.

He's got that removable shoulder armor (which adds a nice different design look to the figure) and those twin black holsters. All in all, he doesn't have a ton of gear, but what he does have really makes sense. Good choices all around. 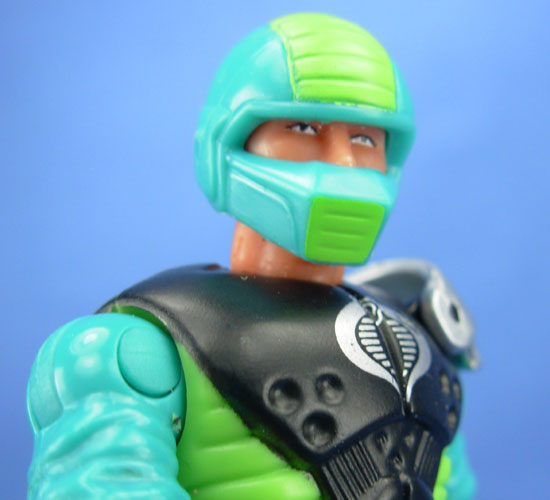 Over the past 4 years, the Collectors' Club has been getting better and better with their incentive figures, and that trend absolutely continues here. Comparing this Copperhead to the clear Zartan figure we got way back when is almost like apples and oranges (at least in my opinion).

From the new sculpt parts chosen, the color scheme, and the accessories, this is a fantastic update to one of the essential characters that hasn't gotten much love in the new sculpt world. This version of Copperhead fits in perfectly with the other new sculpt updates and makes for a nice addition to any COBRA roster. Great job, Collectors' Club. Click here to check out the Club website and see how you can own this great figure! 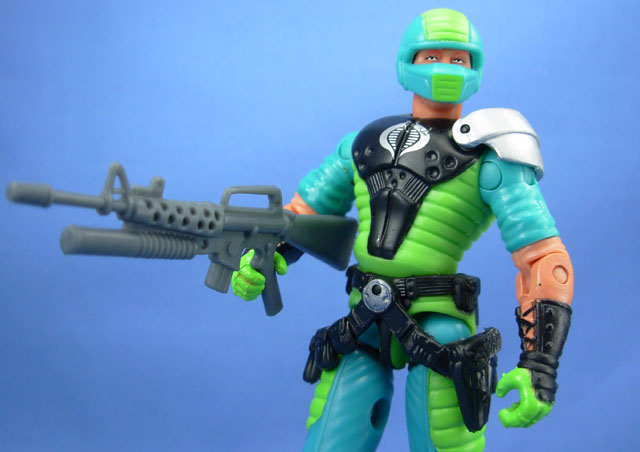 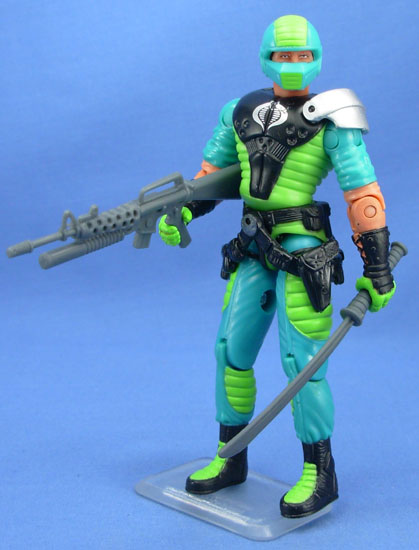 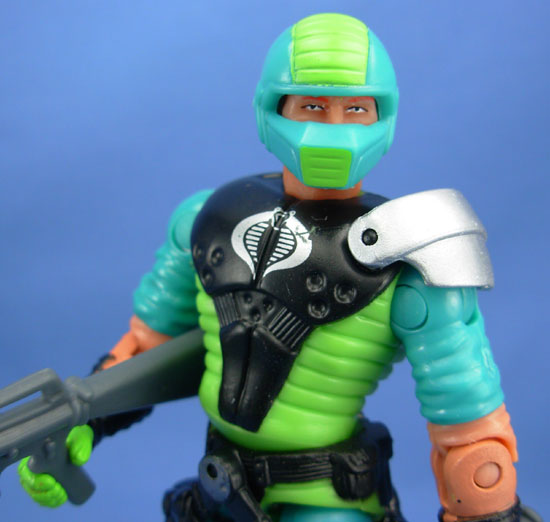 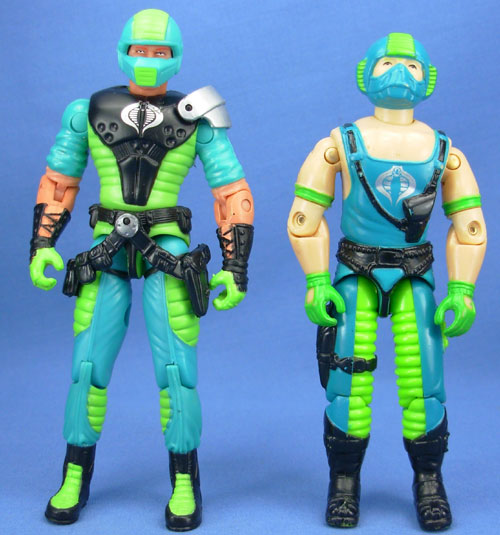 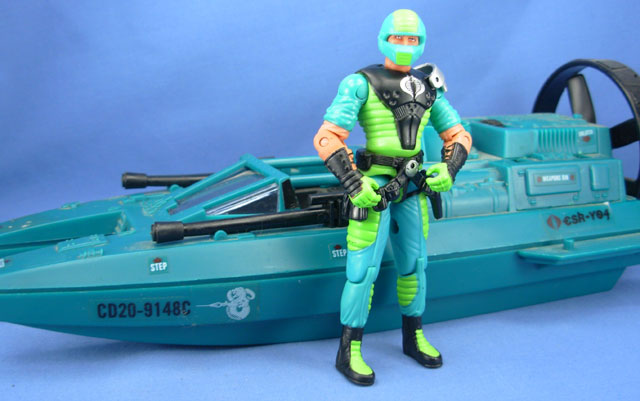 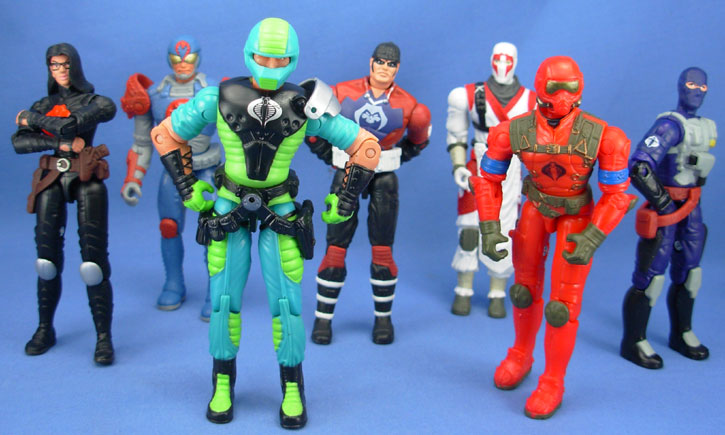 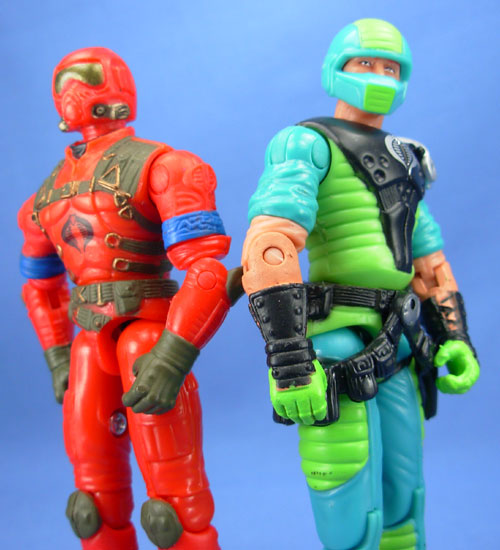 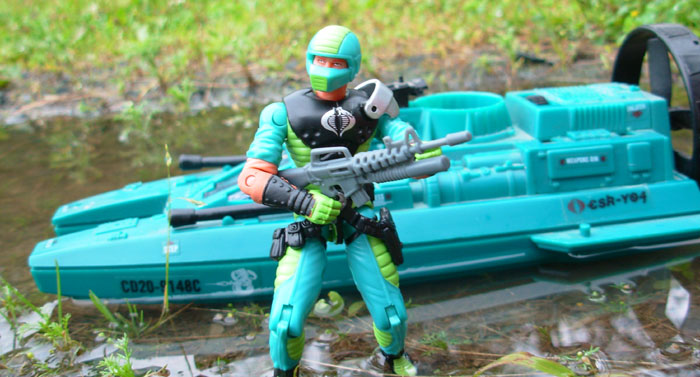 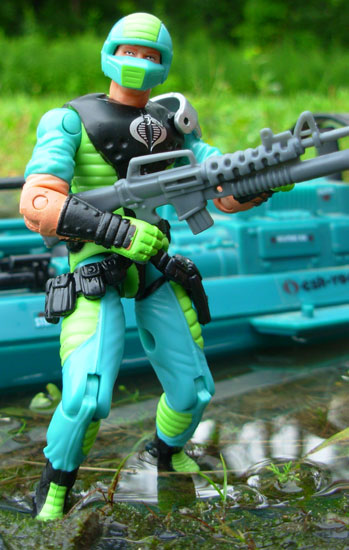 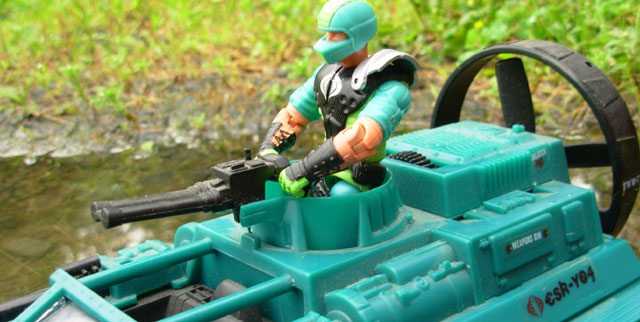