When the comic packs were first announced, fans pretty much went wild with speculation with what Hasbro might be planning and the potential for some great new figures being pulled from the pages of our favorite comic books. And for a little while, we were getting some nice stuff. Comic accurate Original 13 members (except for that pesky Flash and Grand Slam), getting Kwinn for the first time, not to mention a Red Ninja, and of course the original Oktober Guard members.

However, recently, as nice as the figures have been, they didn't seem to have that quality or charm that the original packs did. Typical rehashes like Roadblock, Duke, Flint, Hawk, etc... were all very cool figures, but by no means necessary comic book releases, and by no means figures that we haven't had at least 10-12 versions of so far. Comic Packs seemed like a good source for characters we have been asking for, and as of late we haven't necessarily gotten what we've been looking for.

Well, this latest pair of packs, for the most part, does a great job of getting us stuff we are definitely looking for. This pack not as much as the Oktober Guard themed one, but still not too bad. 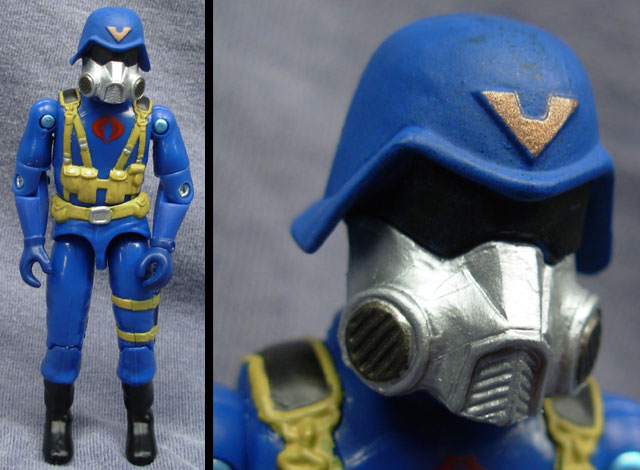 First we start off with the COBRA Trooper w/ Gas Mask. While normally the COBRA army builder would be the most highly desirable part of any comic pack or six pack of figures, but in this case the choice kind of baffles me. I can understand why Hasbro went with these figures, because army builders sell, but I can't think of a single person who would have even noticed these hadn't been released if Hasbro had decided to go with someone else from this issue, or perhaps just choose another comic altogether with some other options. Perhaps Hasbro felt they had to rely on a COBRA trooper to ensure brisk sales of this set, with a female figure included...but in this case with a Lady Jaye fans have been waiting for for over two decades, I'm not sure they were the best choice.

The actual choice aside, how are the figures executed? Not bad...not too bad. But honestly, not great either.

As is the norm with comic packs, we get newly sculpted heads, and these heads are very intricately detailed and actually look quite nice. A very elaborate gas mask is sculpted to the face and under the helmet and it looks quite realistic, quite comic accurate, and very nice overall. I can't quite figure out how useful this figure will be beyond a pretty limited function, but the head sculpt DOES look nice, at any rate.

The rest of the figure is pretty much a straight re-release of the COBRA Officer from Comic Pack #5, colors and all. This works all right, I guess, and makes these gas mask troopers fit in well with the rest of the comic pack COBRA's, but it doesn't give us much new, and doesn't really expand the Joe roster a whole lot. The colors are a nice bright blue and tan, comic accurate and all, but I'm not sure how badly people wanted to see these figures, army builders or not. Paint apps all in all are pretty nice on these figures, too, with nicely applied black trim here and there, a great bright COBRA symbol on the chest, and vibrant color choices throughout. They did have the much maligned rubber hands on their hands in the package, but I was happy to see that they didn't warp the figures' hands TOO much. Not nearly as bad as Misha and Gorky, unfortunately.

Accessories I guess aren't too bad. They each come with one of Red Star's familiar AK-47's and with Baroness' sniper rifle. While the Baroness' rifle is one of my least favorite weapon designs in the entire line, the AK-47 is effective enough, I suppose, and suits the figures well. Nothing incredible, but servicable, anyway.

All in all, these two COBRA army builders don't add a whole lot to the set, but even with their overly skinny arms and somewhat dated mold, they do provide some trooper fodder and end up looking all right. But for obvious reasons they are not the star of this set. 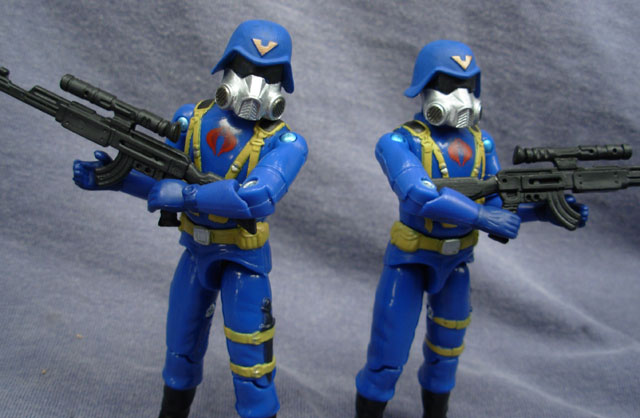 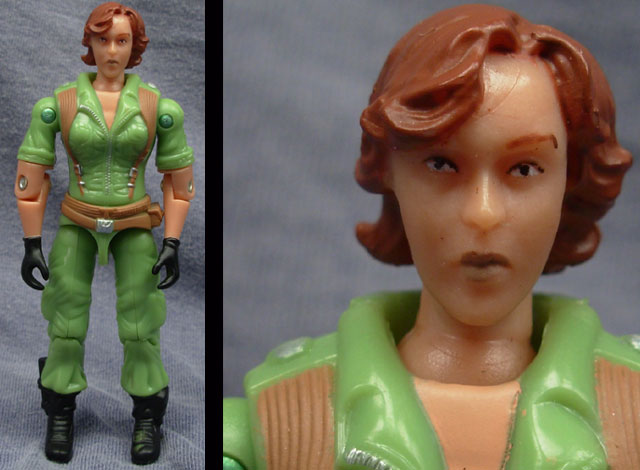 You know by now that I am a big fan of toys that can capture the look of the cartoon, comic, etc... accurately, yet still be fun to play with. This is a big bonus to me of the Sigma 6 line, and part of the reason why I loved Beast Wars so much. It is also part of the reason I hated Lady Jaye for so many years.

Yes. Hated. Her and Scarlett both almost immediately ended up on my bad list as a kid, because neither one of them even closely resembled the character how they appeared in the comic and the cartoon. Scarlett's long red ponytail...Lady Jaye's ruffled brown hair. Instead we got butched-cut Scarlett, and Lady Jaye with a baseball cap! Part of me thinks that was Hasbro's tricky little solution to the whole "female figure" problem. Give them slightly less feminine characteristics, and maybe the little boys won't realize they're girls? Yeah, pretty shaky theory, you're right.

At any rate, this bugged me to no end as a kid, and it kind of led to my distaste of using female characters in my stories. If you'll notice, my dio's don't feature females very heavily...especially not the ones that don't look as they should in other forms of media. I can't help it, that's just the kind of obsessive compulsive crazed collector that I am. But here we are...twenty-one years...

Wait a minute. Did I just say TWENTY-ONE YEARS?!? Wow...it's been a while since the original Lady Jaye was released, and even though she's gotten a few updates along the way, she just never ditched that ballcap. But now that she has, we get a fantastic looking update and a figure that is worthy of comic pack treatment!

Without a doubt, the biggest positive mark for the comic packs are the head sculpts. Even for wildly overused figures like General Hawk, Firefly, and Destro, simple head updates makes a world of difference, and you end up with some very, VERY cool updates, and Lady Jaye follows that trend, although not perfectly.

The first thing you'll notice of course is that Lady Jaye actually has HAIR! WOW! Her hair looks kind of how it should, with a wavy style, but it also looks somewhat flat and the high hairline looks kind of weird, and not really how she has come to look throughout the years. I'm not going to look a gift horse in the mouth or anything, and I still really like this figure, but the hairstyle, which was the main reason to release this figure, just doesn't look a whole lot like Lady Jaye has in the past. Still, it's nice to see.

Really, too, it almost seems like we don't need to talk about the rest of the figure...Lady Jaye's sculpt has been used many times throughout the years, and I still maintain it is a very nice, simple female sculpt and a great figure overall. By far the only downside to Lady Jaye over the years has been the head sculpt, and now that this is at least somewhat resolved, the figure has no downsides. You will notice that this figure is a lot smaller than the original Lady Jaye, which was some sort of bizarre tooling issue at some point down the line, but it's not a significant problem, at least not in my opinion.

The colors are very nicely applied here, too. While part of me would have loved to have seen the figure with darker green pants to better match her cartoon look, the bright green is very "comic book-ish" and very animated, and maintains the vibrant, colorful look that these comic packs all end up with. She fits in well with the rest of the comic pack figures, yet can still be used as a more normal figure as well.

Her accessories are equally simple, with a newly sculpted motorcycle helmet and a rehash pistol. The helmet, when it comes right down to it, probably wasn't really necessary, but it's a pretty cool looking helmet over all, and even though it is slightly oversized, it works for me. Lady Jaye is definitely the "selling point" of this three-pack, and as usual, Hasbro has done a great job updating the head sculpt and giving us a worthwhile new figure. 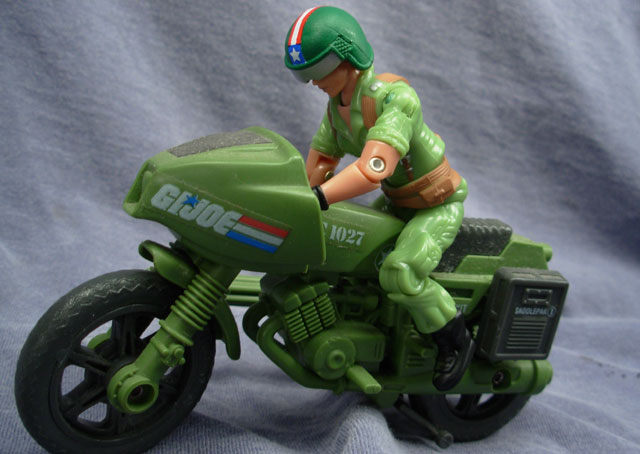 So you have a couple pseudo army builders and a figure that's been highly desired by collectors for over two decades...where can you go wrong? You can't. This pack is absolutely worth the $10.00 price tag, and I don't think anyone will be disappointed here. This is close to what collectors have been clamoring for in these comic packs, so here's hoping Hasbro continues to step in the right direction and give us some more "missing links" like Kwinn, Billy, and Dr. Venom. 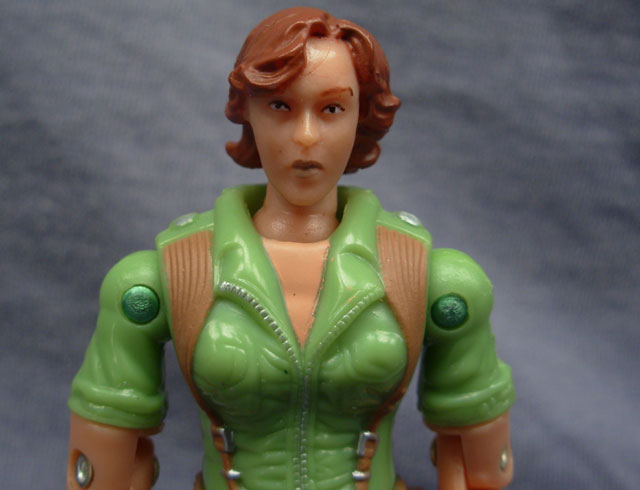 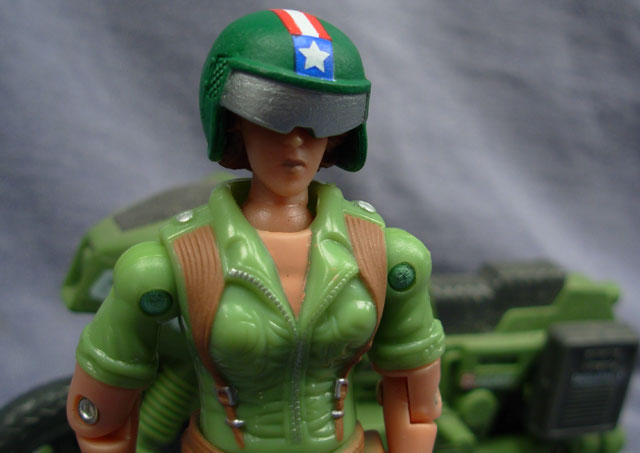 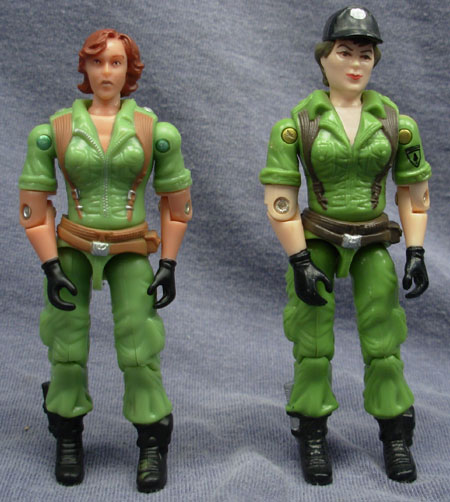 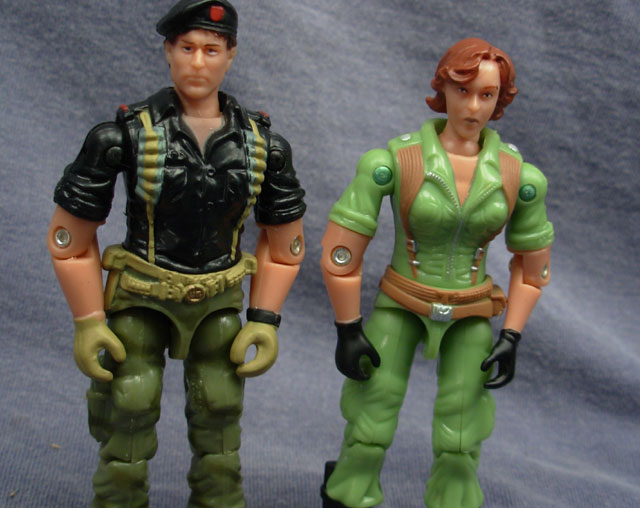 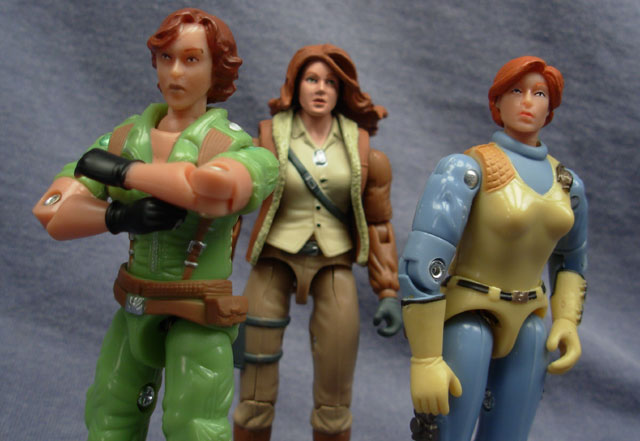 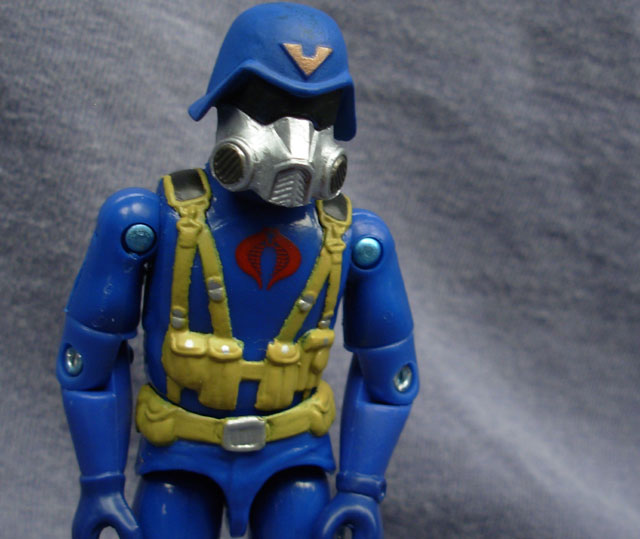 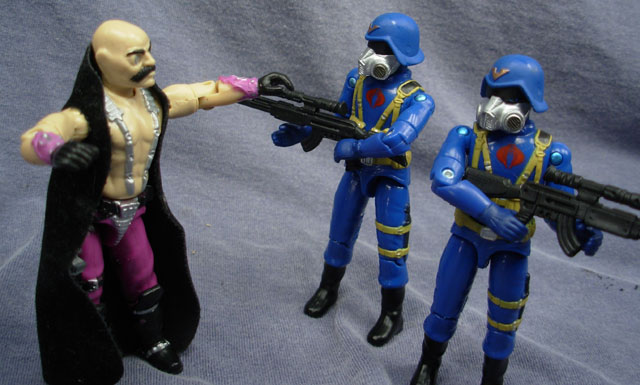 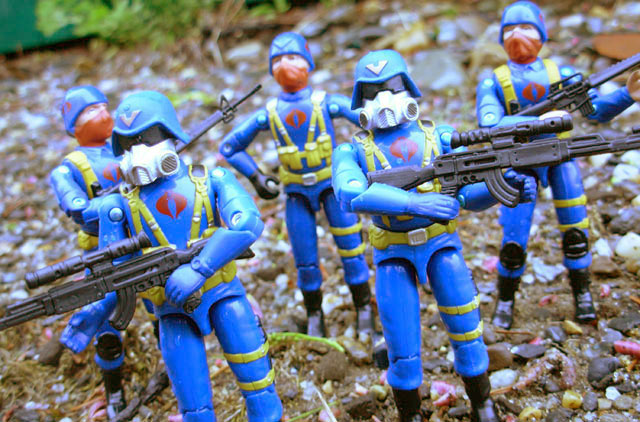 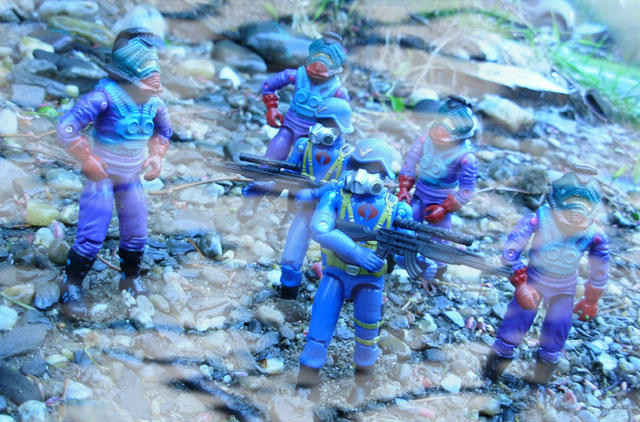