Well, I'm quite excited to see the comic packs look like they're really taking off. These three are all quite successful, and even with the re-use of a lot of overexposed characters in the next allotment, I find myself really looking forward to those as well. Even with characters I don't care a whole lot about, or figures that don't really interest me, Hasbro manages to provide new and exciting things to make me look twice at these packs and always find something to love about them.

This pack is a perfect example of that. 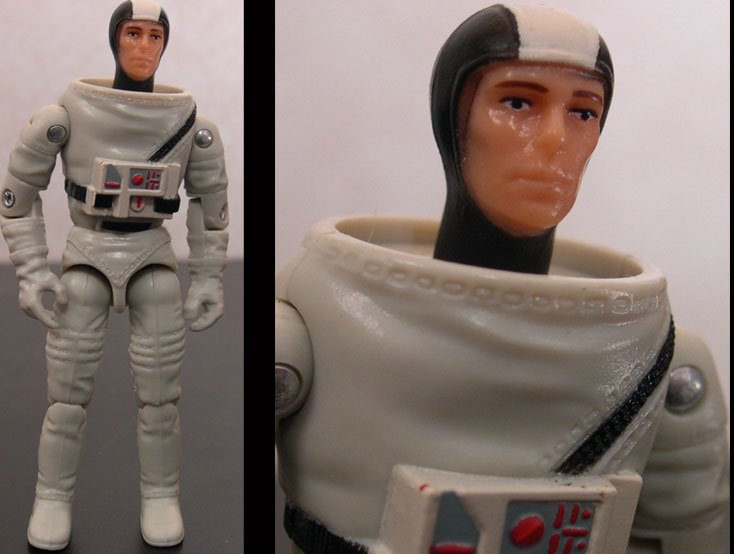 I might be the only Joefan on the net who does not absolutely hate the Flash figure offered in this set. By all rights, I really should...the straight armed Flash was my very first figure way back in 1982 and I have a strong affinity for the character. Would I have rather had a comic accurate Laser Trooper in red pads? Absolutely! But this astronaut figure is still very neat and a well-detailed later mold piece that is asthetically pleasing even if a little bit frustrating.

Starting with the head sculpt, I think that as usual, Hasbro has done a fantastic job creating a new head with some terrific sculpting and scaled down proportions that fit the older sculpts nicely yet look updated as well. The skin tight hood fits the part and in my mind could be easily used within the mold to recreate Flash in his Laser Trooper uniform as well. It's something different, yet maintains the look of the character and makes him more advanced than his fellow teammembers, which he should be.

The figure itself fits the look of the character in this particular comic even if it doesn't fit the general feel of the character. THe mold is a later mold, so it has some bulk and beef to it, with hands of slightly different shape to match the 30th anniversary of the 12" figure releases. THe wrinkles of the uniform are intricately sculpted throughout the mold of the figure and add very nice asthetics to the figure. Other nice additions to the figure include the chestplate/controls section of his torso, which is very simple, yet adds a lot of realism and design to the figure. Beyond this addition, the rest of the figure is quite plain, which works, and does look the part of the astronaut very well. The only main issue with this is that Flash is a beloved character and he is much more well known as the Joes' first Laser Trooper who has a very distinct appearence and function, and this figure pretty much ignores it. Does it look like how Flash appeared in this comic? Sure...but collectors here want their original 13...the original 13 as they would appear in more normal circumstances...which would include Flash in a more recognizable format. Seeing him included here is nice, but I really hope Hasbro can find a way to get him and Grand Slam available in another pack some place. Include Grunt in his more standard uniform and I'll be even happier, especially if comic pack #9 (with Breaker and Scarlett in her standard uniform) ends up released later this year like it's supposed to. 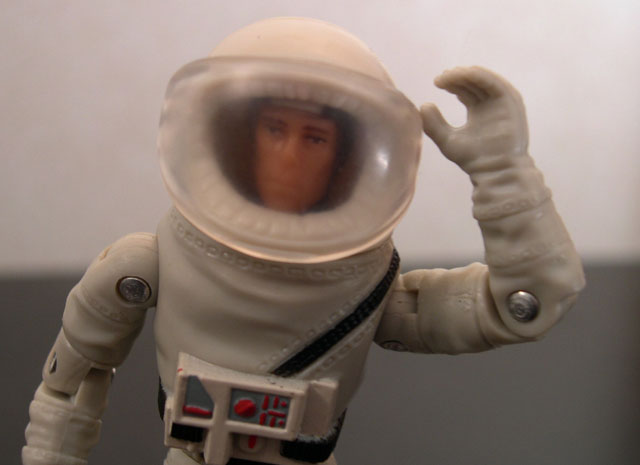 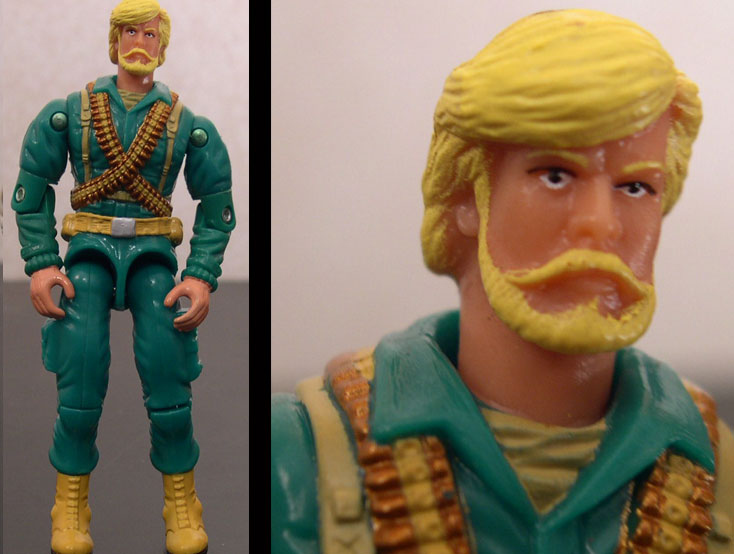 This figure really brings me back...as a kid, even though he was my third figure, Rock N Roll quickly became my favorite character back in the day. An ex surfer, rebellious musician riding a motorcycle and carrying a huge gun? Please! Who else would an 8 year old kid pick as their favorite? Add that to the fact that Rock N Roll was one of the more unique figures in that first wave (the only one with the gunbelts across his chest) and he instantly became a focus in my collection and on my team. I'm somewhat sad to say that none of the future releases really had that effect on me...the '89 version seemed somewhat bland and unexciting (plus I wasn't crazy about what seemed to be a desert-oriented color scheme), and the armor tech version? Yeah, right...

Well, happily, this version maintains what I loved about the original character and makes him fit even better with the new figures...this is a Rock N Roll that I can like! And to me, it also proves that even an overused mold can be used in certain cases to recreate a great figure. Both Schrage and this figure use Big Ben as a base...a figure that needs to be retired. However in these two cases, the parts work great and give us some terrific figures who look as they should.

To start with, the head sculpt, like all others in these comic packs, is well sculpted and nicely detailed, giving Rock N Roll some longer hair and a somewhat wilder beard, something that the first figure obviously didn't capture well. The head looks great and really fits the character as he looked back then, and as he looks now.

The bulky mold of the '91 Big Ben really lends itself well to the Rock N Roll character, too, much more so than the somewhat scrawny '82/83 mold. Even with a figure that had been used so many times people cringe at the mere mention of his name, the mold choice works very well for this figure and I'm very glad to see it. Obviously the machine gun belts are the most obvious telltale trait of the mold, but looking beyond the overuse, there are other nice details to the figure as well, with a nicely detailed sculpt and as I said, a larger than normal mold. You'd think someone hefting a heavy machine gun around would be somewhat bulky, and now Rock N Roll is, as he should be.

The colors are very straight forward, using basic greens and realistic military hues, which ties him in well with the other members of the original 13 so far. The gunbelts are quite nicely adorned, as well, looking realistically brass and the paint apps in general are nice and crisp.

Accessories for Rock N Roll are cool as well, even including what appears to be a newly sculpted heavy machine gun...a great treat for fans indeed.

All in all Rock N Roll is a terrific addition to your original Joe team, yet also is a great overall update to the character...I can easily use this Rock N Roll us my default version, which isn't something you can always say with these comic packs. I'm glad I can say it with this figure. 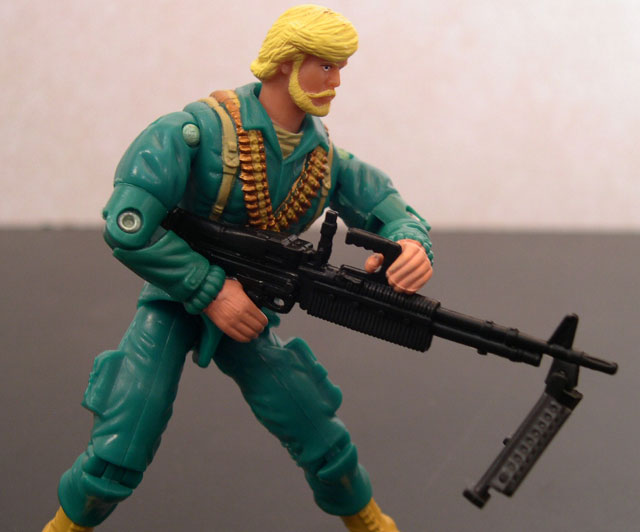 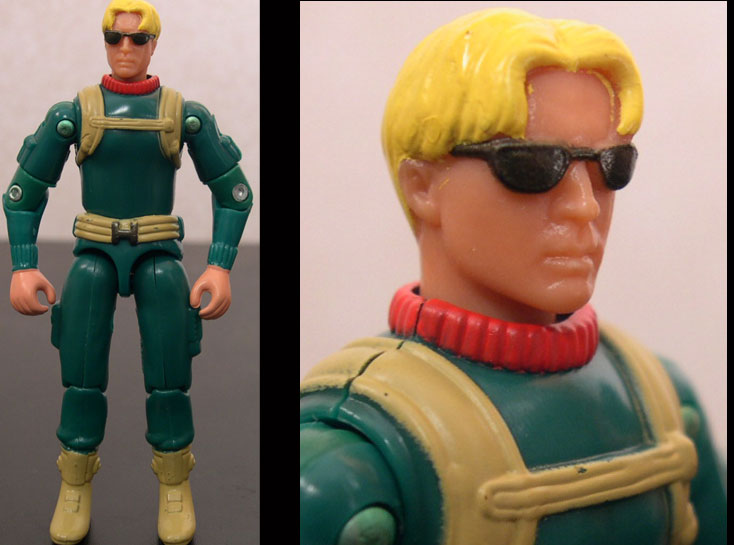 As a kid I was always torn when it came to the original Joes featured in the comics...while Hasbro was relegated to using a lot of the same parts and pieces for their first 13 figures, Larry Hama and Marvel obviously wanted to create some individuallity to the characters in the comics. Breaker got a shave and some bubble gum...Zap got a moustache...Clutch got a 5 o'clock shadow...and Short Fuze got his glasses. I enjoyed this difference in the comics, but the lack of a matching figure to go with it really bugged me. Well, slowly but surely we're getting figures made to better conform to their comic appearences...it only took about 22 years!

Short Fuze is a little different than the other remakes we've been getting...with figures like Zap, Hawk, Stalker, and Snake Eyes, we've gotten the original torso and arms, but a new waist and legs, which I think makes them look a little more updated and effective. Short Fuze has the entirety of his '82-83 mold, which actually isn't as effective as I'd like it to be, especially with the use of his bulky '82 style waist. This limits his articulation somewhat and just makes the figure look somewhat old and even fragile, which means he doesn't fit in with the others as well as he could.

Still, the new head sculpt is nice and updated, with a character-specific hairstyle and nice dark glasses. I kind of wish he'd been sculpted with regular glasses instead of the sunglasses, but the darker lenses are more accurate for this particular issue, and the difference isn't enough to really bother me. The head sculpt matches stuff we've seen with the other comic packs, though, and overall he looks pretty accurate.

The rest of the figure, though, is fairly unremarkable. The mold is a straight re-issue of the '82 figure (but with swivel arm battle grip) which was pretty neat 23 years ago, but at this point looks flimsy and quite dated. The smooth, undetailed mold doesn't really fit into modern looks, but the figure is comic accurate and fits in fairly well with the rest of the original 13, which is good.
The colors are decent enough, too...like the others, the green, military shades ties in great with the rest of the team and look effective and comic accurate, which is what these are really going for. It's a very simple and somewhat bland color pallet, but it's effective for its purpose and mixes very nicely.

I was also quite pleased to see that this Short Fuze (unlike the Night Force version) actually does come with a mortar launcher...as usual Hasbro seems capable of producing great accessory allocation for the comic packs, which kind of makes me wonder why they can't seem to get it 100% right for the TRU exclusives and such. Still, for this figure, it looks good, which is great. 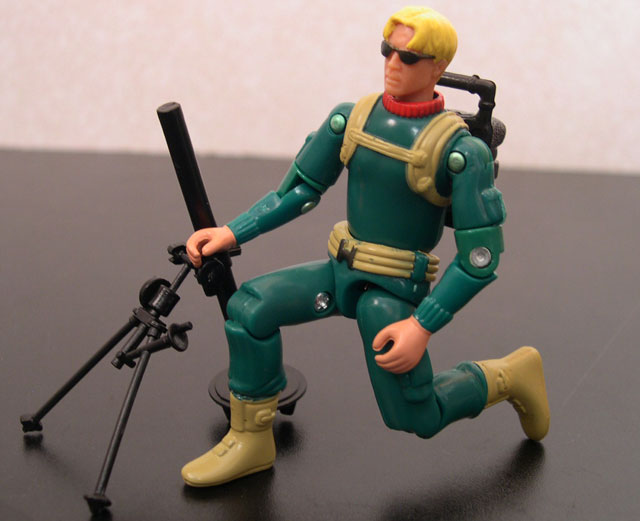 All in all, comic pack 8 may not be as groundbreaking and exciting as the Oktober Guard packs it comes packed with, but it's still a great pack and gives us two more members of the comic accurate original 13. Each of the three figures here have their own positive attributes, and even though Rock N Roll is far and away my favorite of the three, I can appreciate the features of the other two as well, and am pleased with the pack overall. Had Short Fuze even just been given the smaller 82/83 waist (or a newer waist/legs combo) and Flash had appeared in a more standard uniform, this pack would have been close to perfect. As it is, it's the least desirable of the three packs of this assortment, but it's still a nice pack and one I definitely recommend. 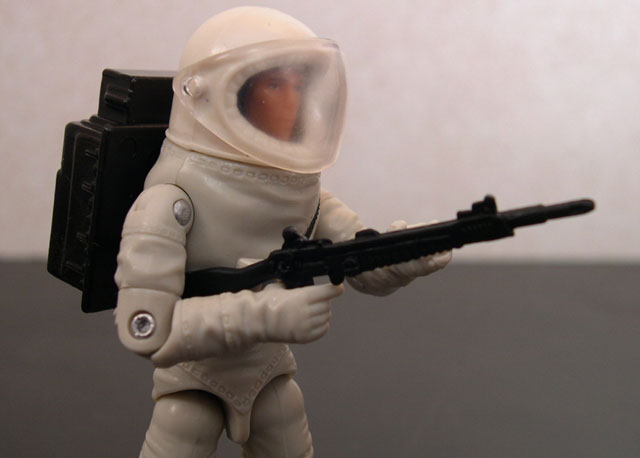 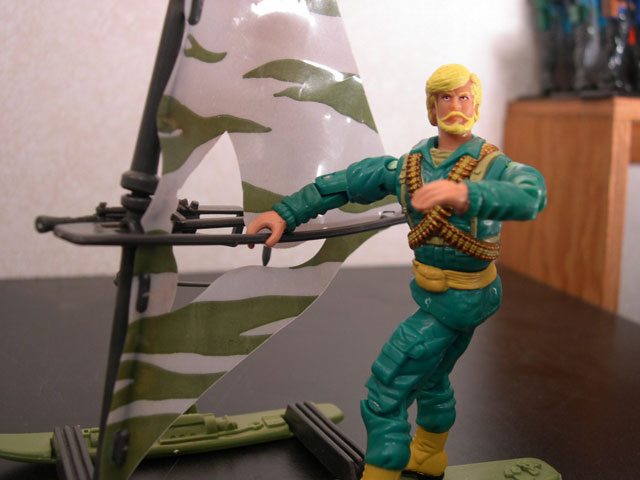 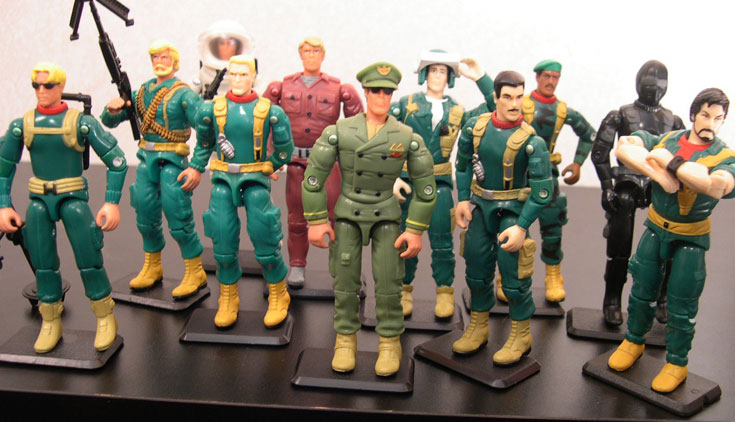 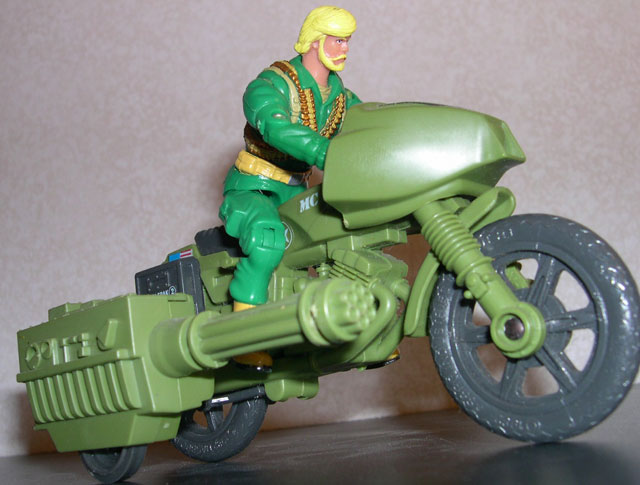 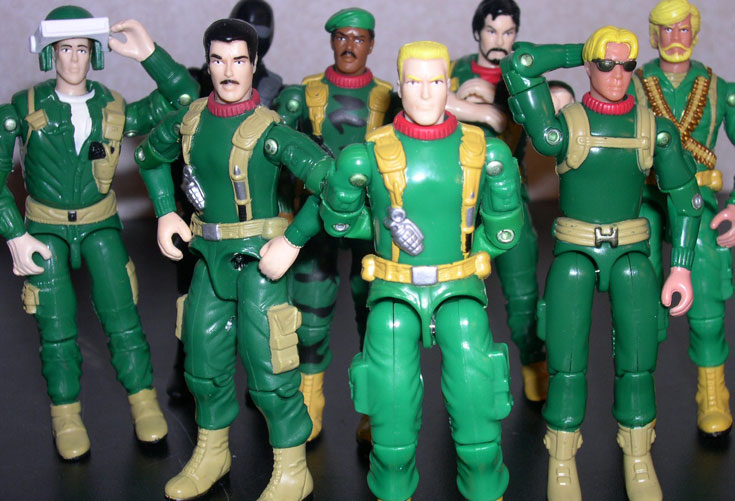