When the first three comic packs were released, I can still remember the rampant speculation and wild guesses that rifled through the online fandom. How many packs would we get? Would they go in order? What were our chances of seeing figures x, y, and z??

One of my first posts in regards to the packs was a desire to see perhaps a 6 & 7 two-pack with 6 figures in it, including the Oktober Guard. Well, I didn't get my wish in the strictest sense of the word, but heck yeah, this is good enough for me! When thinking of the possibility of Hasbro doing Oktober Guard figures, though, it never even occurred to me that they might actually sculpt a 75% new figure in the RAH style just to represent one of the characters. I can't tell you how happy I am that they buckled down and did it, and I really hope the success of these packs pays off so they feel more inclined to do it in the future! But first, I'm going to take a look at the more conventional comic pack figure in the set...following the formula of old sculpt body, new sculpt head to create a whole new character. Did they succeed? Yeah, definitely.

Like Schrage, Stormavick was one of the lesser known original Oktober Guard members, I think. Daina, Brekhov and Horror Show kind of stole the show, while the two background characters brought up the rear and didn't snag as much of the limelight. I'm still very happy to see Hasbro put so much attention into the representation of the two figures, though, because these new head sculpts make an absolute world of difference.

Like Brekhov, Stormavick's new head is sculpted with loads of character and detail. From the wrinkle lines at the eyes to the somewhat flattened features and lines at his nose, Stormavick looks like a seasoned soldier and someone who's been through it all. His face is full of expression and it's topped off by a very realistically sculpted beret which looks fantastic.

Like Brekhov, Stormavick's mold comes from Red Star, and like the other, it is a great representation of the Russian soldier. The thigh holster, wrinkled shirt and rolled up sleeves all come together to create a very authentic looking trooper and an excellent figure. The head sculpt just makes it all work perfectly as a new character.

Instead of sticking with the tannish gray that Hasbro had been using for the figure round of Oktober Guard figures, Stormavick is in a light green-type uniform, which makes him different from Brekhov, yet he still fits in perfectly. It's a nice color that makes sense and looks really good. The red on his shoulders, the little blue and white striped undershirt and darker green shoulder straps only further improve on the over all look of the figure. He just comes across great.

Like comic pack #6, these figures come with comic-authentic accessories that match the figures and characters and really work for the Oktober Guard. Stormavick looks great with his AK-47 and I have no complaints about the figure at all. The rubber bands didn't even warp his hands (but he's one of the only ones. :/). Good stuff, Hasbro. 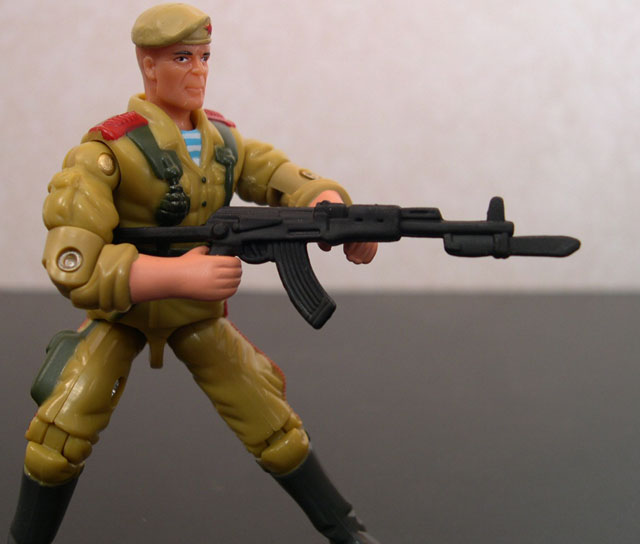 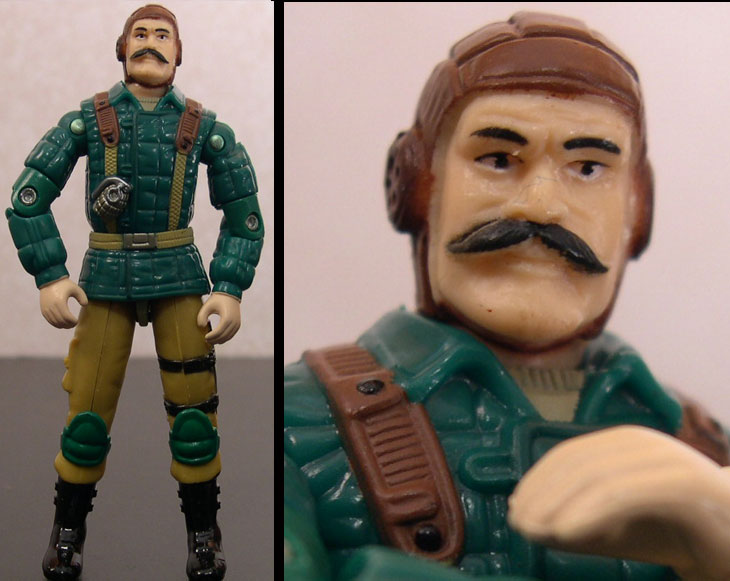 Okay...first of all, don't get me wrong, I love Hasbro...but they don't give me pleasent surprises very often. We usually have a pretty basic idea of their thought processes and kind of get where they're coming from. I can get my head around them and see what they want to do with the line and where their decisions are based on.

But the concept of a 75% new sculpt RAH style figure being in a comic pack, especially representing a pretty obscure Oktober Guard figure just plain floors me. I definitely did not see this coming, but I am very, very, VERY impressed, and more than pleased with the result.

Really, if you think about it, there was no real way Hasbro could have even produced a remotely comic accurate Horror Show using old body molds...who out there could really represent the large Russian bear and give him the character he requires and has shown in the comics (and even in the cartoon). Keep in mind that even though us nerdy adult G.I. Joe fans who follow the comics know Horror Show's story VERY well, he really isn't a central character in the overall Joe mythos. He's not a Zartan, Destro, or even a Major Bludd. He's a very minor character who only appeared in a dozen or less comics, and yet Hasbro goes the extra mile and creates essentially a new figure. I'm so glad they did!

The mold itself, while slimmer and smaller than he appears in the books is very accurate to his comic book appearence and the padded jacket torso is very nicely sculpted. His head sculpt is designed to almost near perfection with his tight leather headgear and bushy Eastern European moustache. The head quite simply IS Horror Show...it's perfect. As I mentioned, the body itself is slimmer than I might like, but it's so accurate to the look of the character, that I can overlook the overall bulk and size. The large padded arms and torso blend together perfectly and the chest straps are sculpted quite nicely as well, intricately detailed and adorned with a nicely sculpted grenade. Blending down into the padded jacket waist piece, we get to my first real complaint about the figure.

In order for Horror Show to look realistic, I agree that his jacket should come down low, but unfortunately the result of this newly sculpted waist is a pretty severe limit in Horror Show's articulation. The bottom of the jacket blocks leg movement, so he cannot sit or even kneel on one knee to fire his rocket really well. I'm not sure how they could have gotten around this problem, although a rubberized "skirt" like they use with the new sculpts is a possibility...this isn't a major complaint, but it is a complaint and somewhat hinders what could have otherwise been an amazing figure. Still, as it is, this guy really looks the part and the pluses so far outweigh the minuses that it hardly even compares.

Like his fellow members of the Oktober Guard in these two assortments, Horror Show comes with an excellent accessory compliment, including his trusty RPG, an absolute must for the larger than life Russian rocket specialist.

Overall, I'd say Hasbro's first new sculpt RAH style figure since 1995 is a complete raging success, and makes me long even more for the days of old sculpt styling...a Horror Show figure like this makes me realize that even in the older style, Hasbro could produce some incredible figures. Great stuff, indeed. 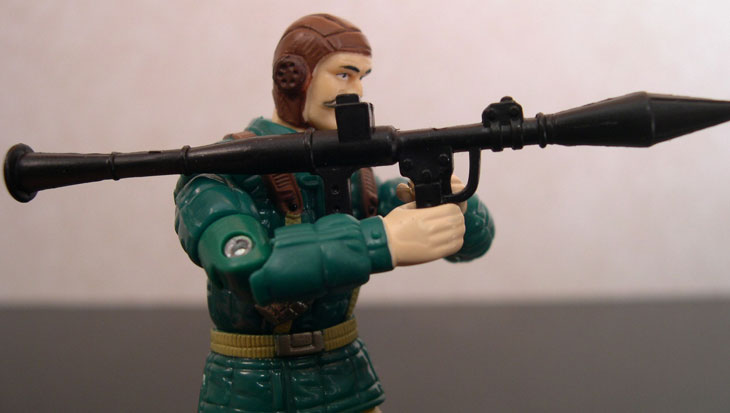 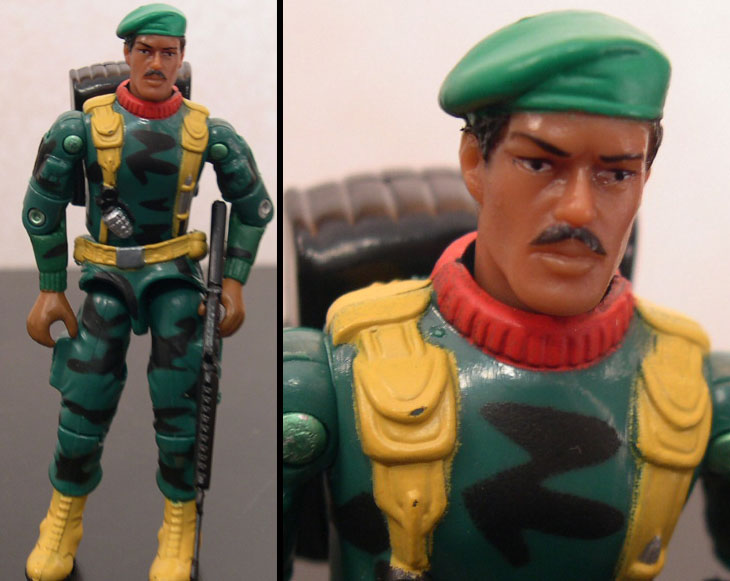 Deja Vu...I mean, we just got a Stalker figure in comic pack #3 not too long ago, and now we've already gotten another one...two Stalkers before we get a single Duke? This must be some sort of alternate universe.

But at least the new figure is an improvement...

Stalker was pretty much my favorite figure in the third comic pack, and near the top of my list overall of the comic figures released as of this wave. Even though his uniform was pretty bright the head sculpt looked incredible and extremely comic accurate. I cannot think of many issues at all with that version of the original Stalker, at least until I got this one...now I see what a difference some darker colors make.

The sculpt itself remains the same, which I've already spoken about in my review of Comic Pack #3, so I don't want to dwell on it too much, but the fact remains that Stalker's head sculpt is one of the best I've seen in the comic packs so far. His grim, determined face and realisticly wrinkled beret mixes with the classic mold perfectly...and even though his torso and arms are over 20 years old mold-wise, they still fit in with today's detailed sculpting and he looks great. The waist and legs from the Talking Battle Commander General Hawk fit in pretty well, too, and the overall figure looks terrific.

However, the real difference here is the color scheme used. In Issue #7, Stalker's colors aren't necessarily that much darker than usual, but Hasbro chooses to go with a much darker green color scheme compared to the original, and it works wonders. These little changes make a big difference and the figure looks a lot darker, more covert, and just better overall. Even keeping the straps and belts the same yellow-ish hue works fine. Other little changes like the silver grenade, silver knife blade, and silver belt buckle all make equally fine changes and the overall result is a fine looking figure which makes my previous favorite look bright and out of place.

Stalker's accessory compliment isn't too shabby, with the new sculpt M-16 and Ambush's sniper rifle/machine gun. No backpacks, nothing amazing, but it's not too bad. All in all, this Stalker figure definitely isn't any real reason to buy this pack, but he's not bad, and you shouldn't feel too bad about getting this figure along with your five-pack of Russkies. 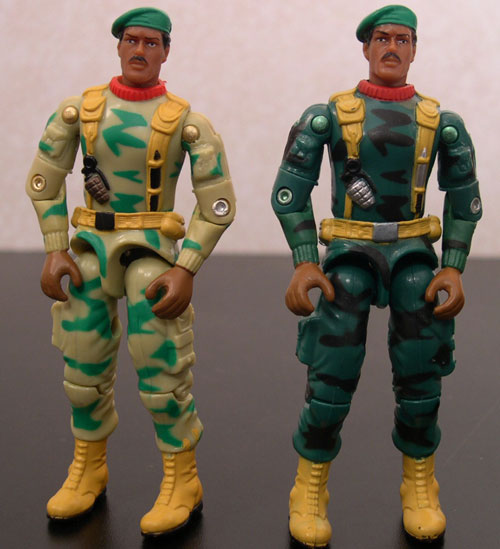 So, how does it feel to have a full compliment of the Oktober Guard finally after twenty years? Feels pretty darn good, actually.

I can only imagine the success of these packs will hopefully encourage Hasbro to produce some of the other, later OG members like Gorky, Dragonsky and Misha, but for now, I'm extremely happy with what we've got. The new head sculpts are all comic accurate, for the most part, but more importantly, they're very in tune with the characters they're supposed to represent. The figures look fantastic, even with the reused body molds and Hasbro took a huge leap forward in my opinion with these new figures. 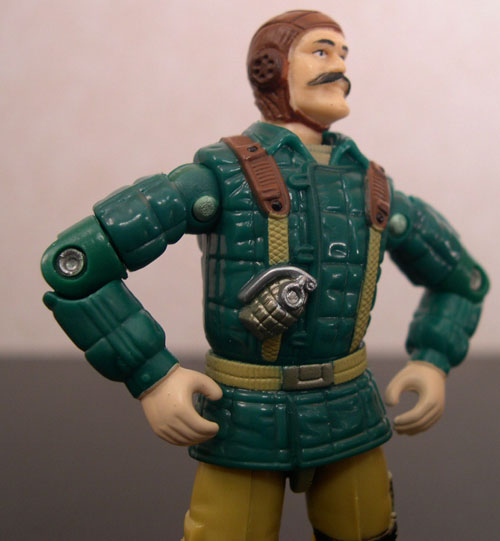 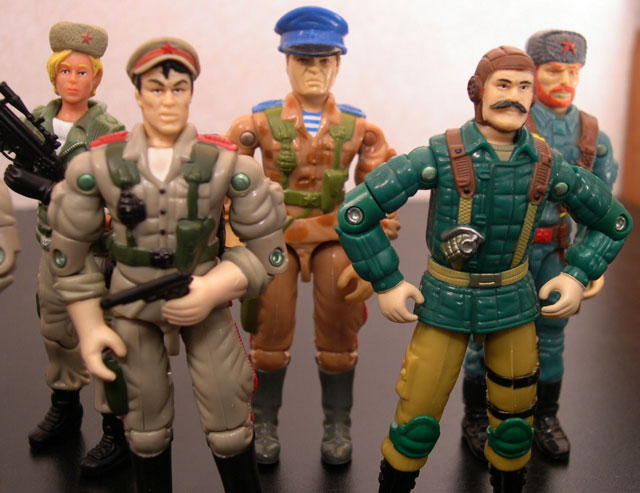