Between this comic pack and the two new upcoming Crimson Sets, that's THREE Firefly figures in the span of a month! Come on, Hasbro doesn't that seem excessive?!? Just a little bit? Considering we recently got one with the Urban Strike as well, and well, got, like a DOZEN of them since 2000?? Oye, please!

And yet the worst thing? I love this Firefly figure. In fact, this comic pack is my favorite of this latest wave.

When I saw the figure layout I was trying to figure out which comic it was for...I mean, Serpentor alone didn't appear until #49, and he definitely wasn't in his armor then. Hasbro had been doing so well in the comic accuracy, certainly this couldn't have been for issue #49 could it? Yeah, apparently it is. Now we saw both Scrap Iron and Firefly in the Urban Strike set...did we really need them again? No, we didn't. But they still prove to be interesting additions and neat figures. Scrap Iron desperately needs a newly sculpted head...imagine one with a removable helmet? Wouldn't that rock? Yeah, it would, except Hasbro didn't do it this time around. :(

In spite of Scrappy's oversized noggin, the figure overall is still pretty neat. While somewhat dated, Scrap Iron's mold is still interesting and appealing with his neat armored vest, elbow pads and intricately detailed uniform. Back then, his head and helmet looked neat and different, but now it's oversized and not nearly as cool as it could be. Hasbro could have done amazing things by re-sculpting his head and making his helmet removable, but alas, it's not in the cards.

It would appear that the main draw of this figure lies in it's new color scheme, which is kind of hit or miss to me. The much lighter blue and red paint apps are definitely comic accurate, but I really find myself liking the darker look a lot better, especially the one from the Urban Strike team. But, this bright color pallet really grabs the attention nicely and looks very cool. The figure does look as if it was pulled directly from the comic (and cartoon for that matter) with this brighter appearance, and overall, I think he looks great.

A few changes could have made a world of difference, but at least this is only the third Scrap Iron figure since 1984...not the 20th.

His accessories aren't too bad, although they're nothing to write home about either. He comes with the strange shoulder-mounted sonic rocket launcher that Sonic Fighter Zap came with and the overused laser pistol that originally came with the 90's Destro. Nothing amazing, to be sure. 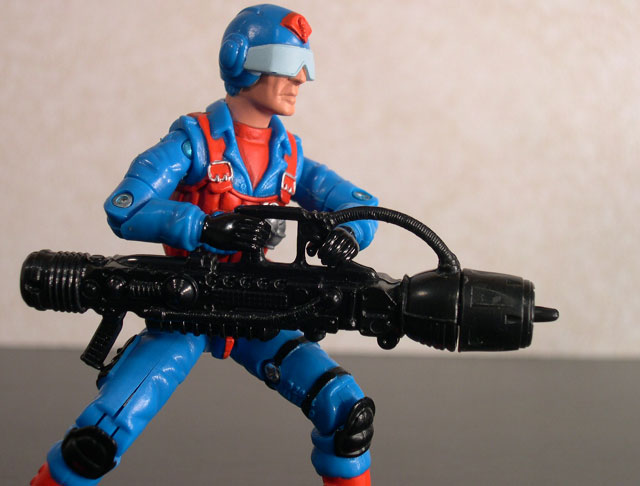 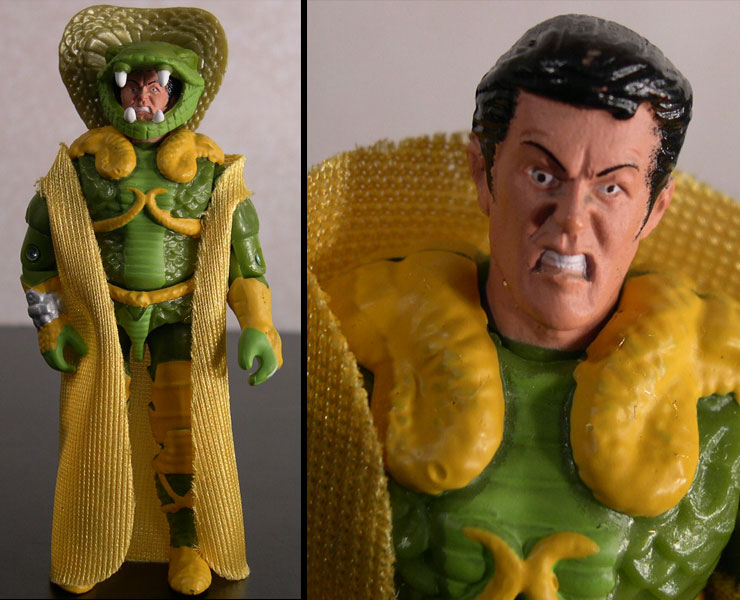 Next up is Serpentor. Well, when Serpy first appeared I was a HUGE fan. I LOVED him. A competent COBRA leader who wasn't afraid to dive into battle and fight alongside his troops really made me like him...he had the mind of the greatest leaders of history, and potentially the fighting skills of them, too. How cool is that?

Then he appeared in the cartoon, and my opinion of Serpentor was scarred for life. :(

Still, I have a soft spot for his early appearances, and while I was REALLY hoping for a non-battle armor Serpentor figure, this one is a great option, too. Even though it's really not comic accurate, since he didn't appear in his armor until the 50's, the figure still looks great. A much brighter green/yellow makes him look more comic accurate and the armor looks fantastic in this color as well. The elaborate layered armor and scales really shine through nicely with this color and the figure is very nice looking.

But the definite highlight of this figure is his head sculpt and removable cowl. This looks AMAZING. A lot of people are not fans of the look...not wild about Serpentor's face sculpt...but to me, someone with centuries of memories running around in his head might be a little on the unstable side. This face sculpt shows that well, but looks very awesome, too. Very intricately sculpted and the removable cowl looks and fits GREAT. I really, really like this figure a lot. Nice work.

His paint applications also work surprisingly well, considering how bright they are. Compared to the deep green/gold of the original, and the black based second version, this one is near-blinding. But I find the color pallet oddly appealing and really, the brighter colors almost make it seem more comic book-like. I have no problems with the overall paint scheme at all, and actually like it quite a bit.

Accessories are sketchy, really...he only comes with his knife (no snake) but the combination of cowl and headdress really make up for it. He always had an Egyption look to him with his broad headdress and dramatic serpentine cowl, and that definitely translates well here. I find that even with his cowl on, I really like the figure and think overall he looks a lot more effective here than he did with the molded helmet. Very nice. 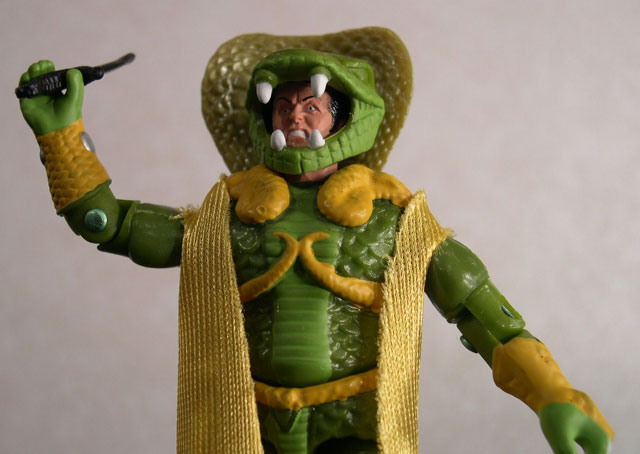 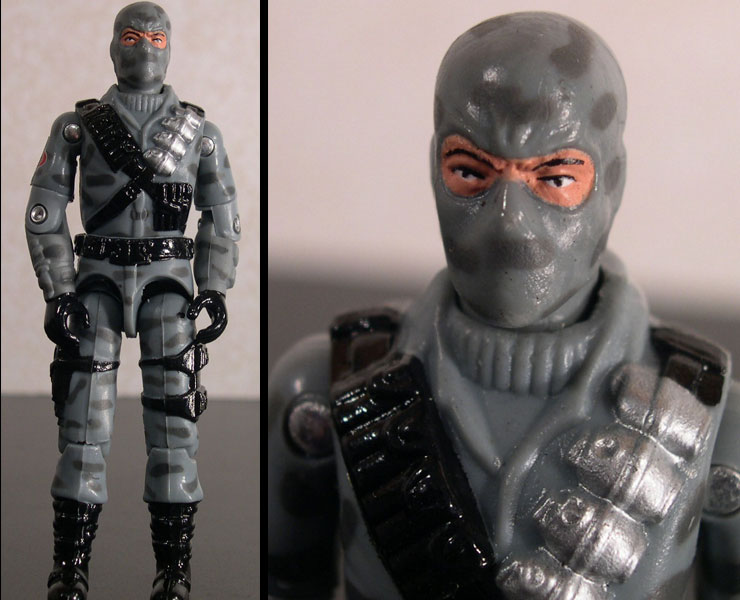 So...how many friggen Firefly figures have I looked at recently doing these reviews? Too damn many, I'd say...but I have a hard time complaining, considering how cool the last two have been. First, the Urban Strike force Firefly with an awesome new updated camouflage pattern...and now we've got this update to the venerable classic. And it is a terrific update.

Every single Firefly figure that gets released is bemoaned by fans if it doesn't have gray camouflage of some kind. Normally, it really doesn't bother me, but after seeing this figure, I wish Hasbro had done it more often!

The mold looks great in this color scheme, using the original Firefly's basic gray base color to work off of, but really enhancing the color scheme and making his belts and straps an awesome, quite dark, nearly black color. All of these minor changes fit together to really match this mold to near-perfection and Firefly looks like the classic COBRA sabatour that he always should.

But the figure still would ultimately be an annoyance if not for his amazing new head sculpt. OH MY GOODNESS. This is Firefly at his bad-assed BEST. What a freakin incredible looking head. They take his familiar balaklava yet take away his goofy almost day dream eyes...his brow is now furrowed, his glare intense, and his detailing even more nicely done. This Firefly figure is a fantastic update to an already fantastic character. I can't even believe I'm saying it, simply because I'm so sick and tired of this mold, but when an awesome change like this is achieved, it's important to pay attention to it and to give it the credit it deserves...it took a blah rehash and turned it into a very desirable, terrific looking version of a great character. Nice work, Hasbro.

And of course, we all know Hasbro has his same old classic accessories...they're all available here in basic black and look great. Firefly here is the total package, and a terrific updated look.

All in all, I'm somewhat sorry to say that the comic pack series has unfortunately ended on a somewhat down note...but perhaps after the mind-blowing Oktober Guard sets, it couldn't help but be a down note...I mean you can't get much better than that. Still, with figures like Duke, Firefly, Storm Shadow, Snake Eyes, etc, etc, you can't help but think Hasbro just kind of worked around what they had instead of trying something new and different.

Just the same, though, for what they're working with, they did a pretty good job, and the comic packs still look nice and are very cool. I only hope they survive after this hiatus ends and we get some more stuff for the future...as I've said, there is so much more left to be done, it would be terrible to see it end here.

One last note, as well...Hasbro finally has removed the rubber bands from the figures hands! If you're listening, THANK YOU!!!! It's nice to have these terrific figures actually maintain their normal hand positioning...

I don't want to seem like I'm badmouthing the comic packs, I'm really not...I do love them, they bring me more joy than a lot of the stuff out there now. I just don't want to see them end, especially on a wave with lots of the same old characters and the same old stuff. Bring 'em back, Hasbro! I know the Devil's Due Fan's Choice 3-Pack is still on the horizon (I hope) so hopefully we've got more great stuff coming, too. 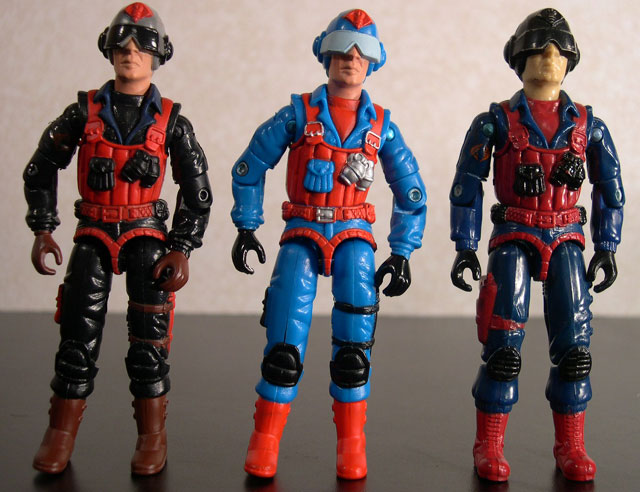 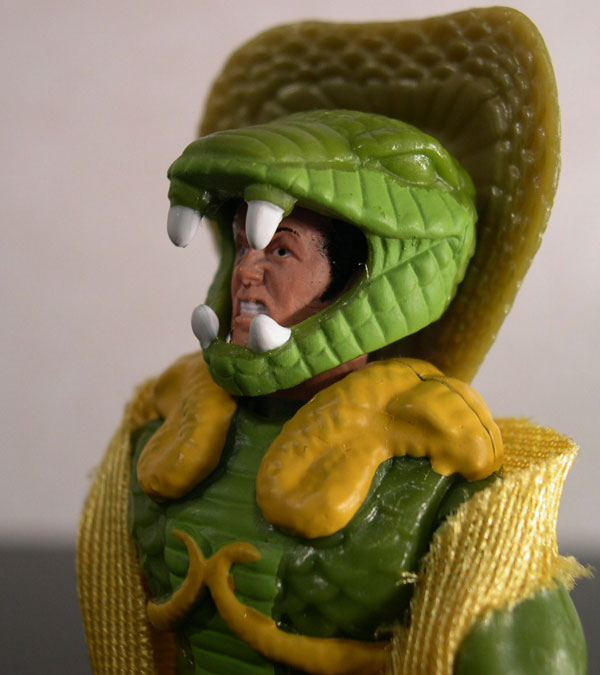 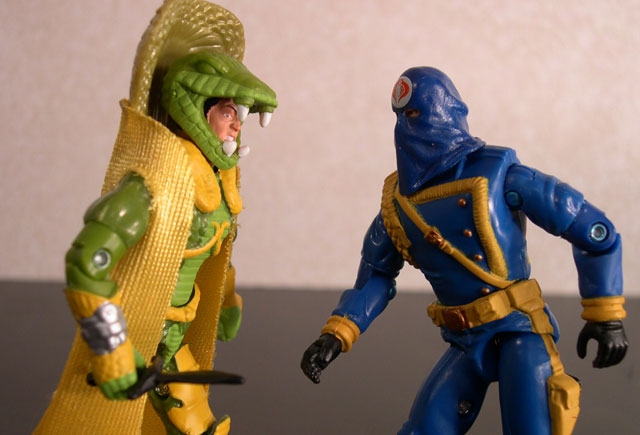 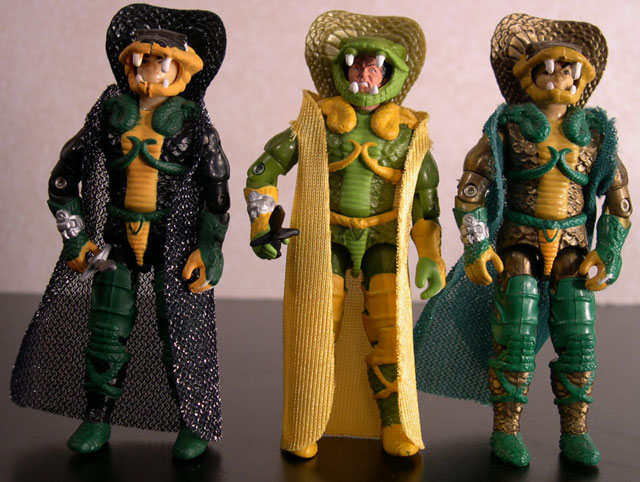 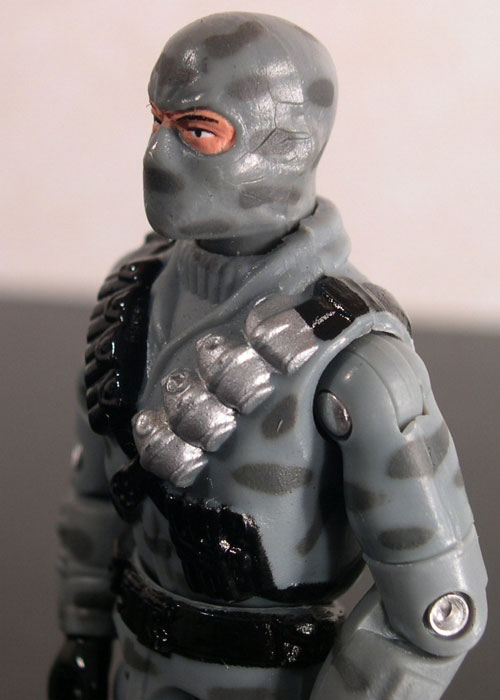 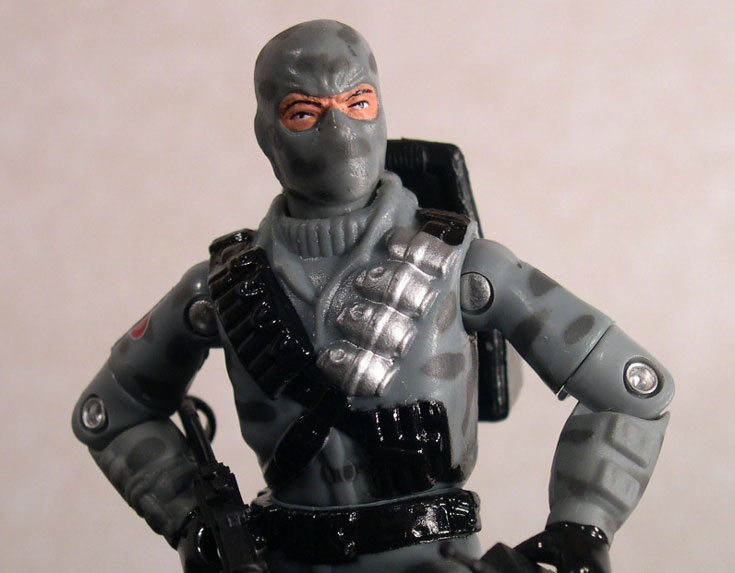 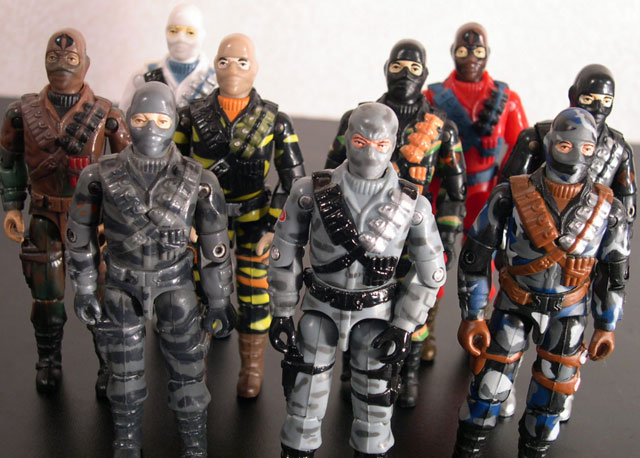 Scary, ain't it?? I don't even have the two Crimson Force Fireflies in there yet! 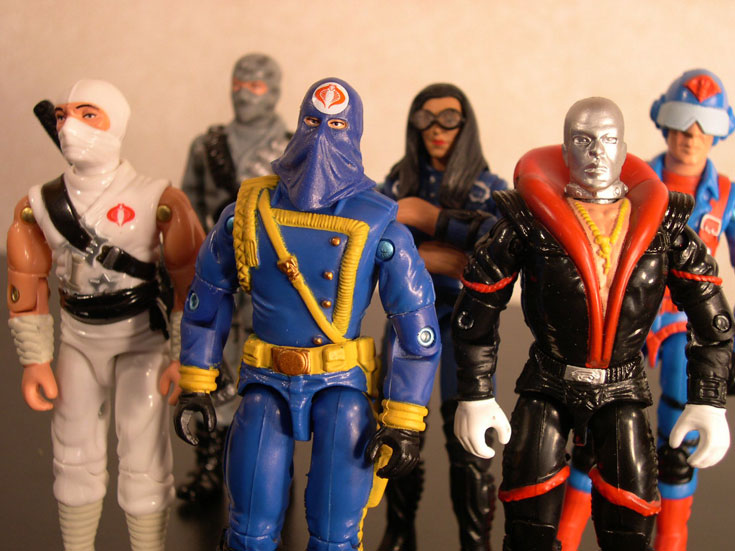