I'd be very interested to see exactly which aspects of G.I. Joe get the most custom figures created after them. I'd be willing to bet that the Vietnam renditions of Snake Eyes, Stalker, and Storm Shadow rate pretty far up on the list...heck, I started trying to do them myself at one point!

Essentially, it's stuff like this that I've come to expect from the comic packs, and conceptually I like where they are going here, however execution-wise it would seem that unfortunately, Hasbro is still quite limited by mold availability and selection. It doesn't make a huge difference here essentially, but you can tell by the parts used to create these figures that we may just be running near the end of the life cycle of the Real American Hero style molds. While this pack is pretty nicely effective, it must be noted that Storm Shadow uses mostly '84 Roadblock parts, which have been used in abundance (including with a comic pack released just earlier this year) and Stalker uses some '83/'84 Duke parts which have done likewise. Thankfully, the Hasbro designers are able to add enough spice to these figures to outshine those common parts uses, and again, in spite of repetetive selections, we get some figures that still work pretty darn well. However, a word of warning: the band-hands are back! :( Yeah, Hasbro used those stupid rubber bands to pre-pose weapons in the pack and Snake Eyes and Storm Shadow especially end up with a nasty case of "band hands". That really stinks. 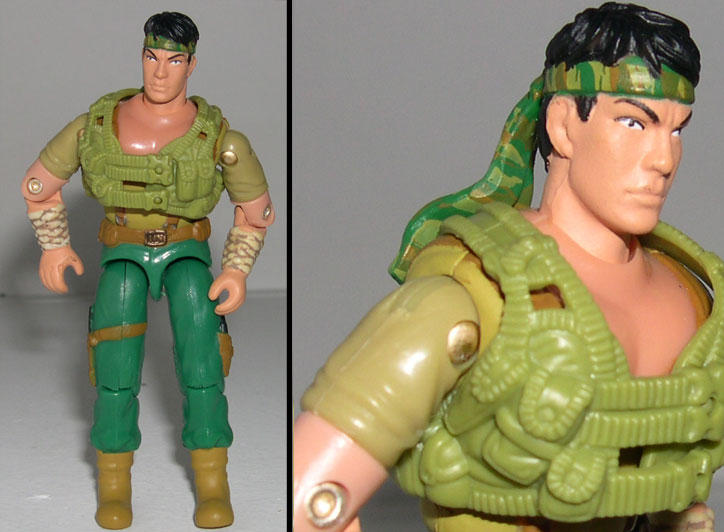 Tommy Arashikage is first out of the block, better known as Storm Shadow. It's almost hard to remember back to before the days that we knew Snake Eyes and Storm Shadow had a history...back to issue #21 where Snake Eyes and Stormy met for the "first time". Yet, even though there were just a couple of flashback issues, the look of the two back in that time became immortal and often duplicated. Here we finally get an official duplication, and it turns out pretty nice, overall. The head sculpt at first seemed pretty reminiscent of the Lui Kang Mortal Kombat figure, but upon closer inspection, it is quite obviously different, with short hair, and a great, thick bandana wound around the head. The distinctly Asian features and cropped black hair pulled back behind a bandana look just as Storm Shadow did back then. However, the head does look strangely large when it sits upon the Roadblock torso. In spite of this, though, the head sculpt is just beautifully crafted, especially where the headband winds around the hair and ties in back. The camouflage paint apps on it are pretty much flawless as well.

As I mentioned already, Roadblock parts are featured pretty heavily here, but for the look they're going for, it still works. A basic green tank top looks fine for Storm Shadow, and the Crosshair web gear over the top of it works well, too. I'm really not a fan of Roadblock's legs either, but for whatever reason, the Vietnam era representation works all right for me here.

Tossing on Storm Shadow's arms makes perfect sense, and it fits well. Ultimately, the parts choices, even though they've been used many times before, still work, and that's all that matters in this case. Is it 100% comic accurate? Not at all...but it has enough of the base features to represent the character and at least look somewhat the part.

Colors work fine here as well, with mostly greens and browns, and some nice dirty white on the bandages. They all look authentic and come together pretty well. As I said above, the camouflage pattern on the headband is nearly perfect, and pretty much all colors are accurate and make sense.

He comes with a nice assortment of accurate weaponry, too, with a great bow and arrow set, a submachine gun and webgear all well suited to his comic book appearence. In fact, his accessory compliment is pretty much perfect, and in spite of the reused parts, this figure works really well for who it is supposed to represent and is probably the best of the pack. 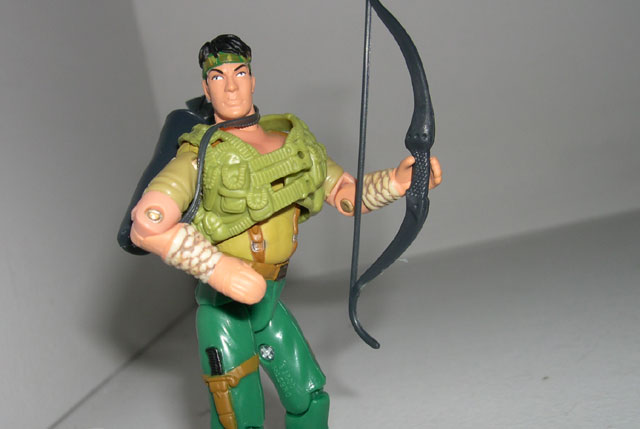 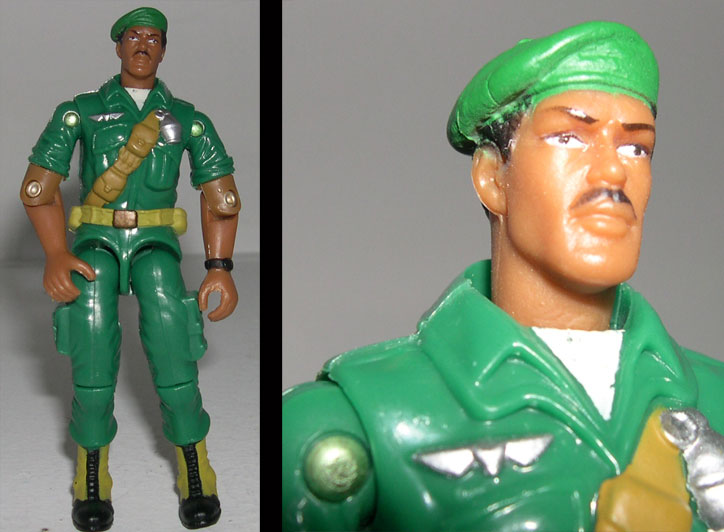 Has Stalker been done to death in these comic packs? Maybe...this is his third rendition, all using the same head sculpt since the packs launched not too long ago. However I don't have a big problem with that because so far in all cases, the head sculpt has worked perfectly, and it continues to do so here.

Going younger with the face sculpting done the way it was worked well in figures that were supposed to represent his early appearences on the Joe team, and it continues to work well here, really looking like a young and tough version of the former Detroit gang leader.

I find myself quite surprised with how well the body itself works, too...whenever I've seen people try to conceive of the Vietnam era Joes in custom form, never once do I remember seeing Duke parts used, and yet here we go with Duke's torso, and surprisingly enough, it actually works pretty darn well. Thankfully Hasbro did locate some arms with actual short sleeves to use as well, and we get a decent set of realistic arms (no Duke arms with "fake sleeves") that look fine, too. The waist and legs also look suitably "military" enough to pass for some Vietnam-era fatigues.

The colors work fine, too, with a solid green shade all around...nothing elaborate or intricate about the paint apps, but it is effective and it looks pretty authentic to the comic. His weapons compliment is sadly lacking somewhat, coming with just a standard M-16 instead of what would have been a VERY cool scoped M-16 w/ silencer. I would have loved to see a new sculpt weapon designed like that, personally. Also, the SAW Viper backpack is horrendous and does not look the least like the communication pack Stalker should have come with...ultimately, Stalker really gets the shaft in the accessory compliment here and doesn't come with much that resembles what he carried in the comics.

All in all, Stalker isn't really all that exciting or revolutionary, but he looks the part, and it works, I suppose. 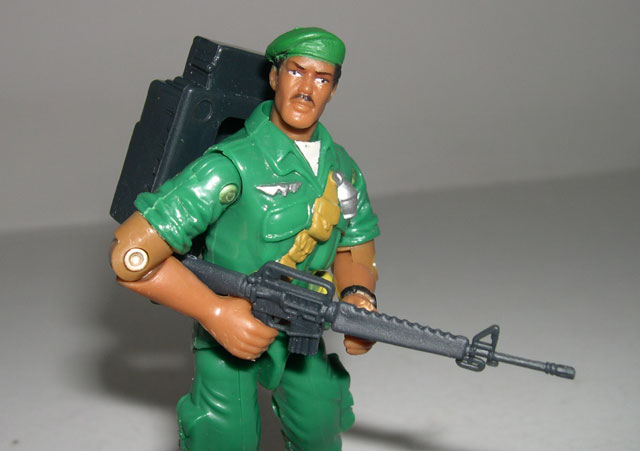 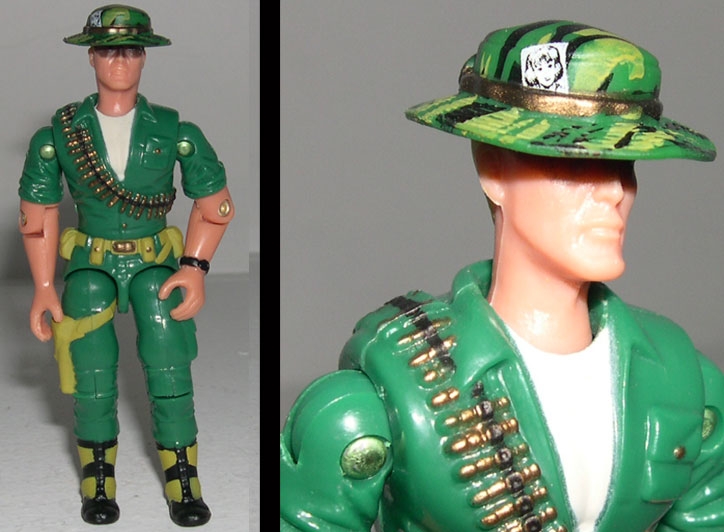 Honestly, I'm going to have a hard time calling this guy "CLASSIFIED" throughout this write up, so let's just stick with Snake Eyes, shall we?

First of all, the mold looks pretty effective, using a '92 Gung Ho torso, waist, and legs, which in this straight up green paint look like completely different parts, and honestly work pretty darn well. They really look like your standard army fatigues with a machine gun belt and holster strapped over them. Surprisingly effective.

Like Stalker, thankfully they found some short-sleeved arms to work with and it looks much better than some previous versions we've seen, most recently with the different Duke variations. You end up with a fairly simple, yet nicely applied sculpt, and with the plain jane green and tan paint apps, you have just what you'd expect. A standard grade soldier from that mysterious "Southeast conflict" that Devil's Due seems so adamant to avoid.

But of course you have to think the head sculpt is really where they're trying to show this as a distinctive, new figure...and it works, kind of. I was quite surprised to see that the hat was physically attached to the head (and that the head is merely a comic pack "Hawk" head, NOT a new sculpt) and that there was this shade painted directly on the face to make it look more like how Snake Eyes was always drawn back then. The results are pretty mixed. Personally, I would have preferred a removable hat (and I suppose if I just stuck a comic pack Hawk head on there, that's what I'd have) and the shade on the face really does not look quite as nice in plastic sculpted 3D form as it might appear in drawn and colored form. Still, though, I like that Hasbro really tried to capture that effect to be as real as possible.

The hat itself is just a Crosshair hat, flipped around backwards, but the camo pattern painted on it looks fantastic, not to mention the fact that Hasbro actually went the extra mile and tampo'd a small reproduction of Snake Eyes' sister's picture right on the hat as it should be. This little attention to detail is just plain terrific, and really brings some great life to the figure. That's a tiny detail that could have easily been glossed over, but they didn't, and they end up with a great little effect. Very nice work on that, for sure!

It's pretty remarkable that such a simple "custom" in effect could end up being an effective representation of Snake Eyes in his Vietnam days...there really aren't any new parts or any revolutionary design schemes, but the figure looks like it should and feels like it should. A nice job for sure, and it compliments the other two perfectly. 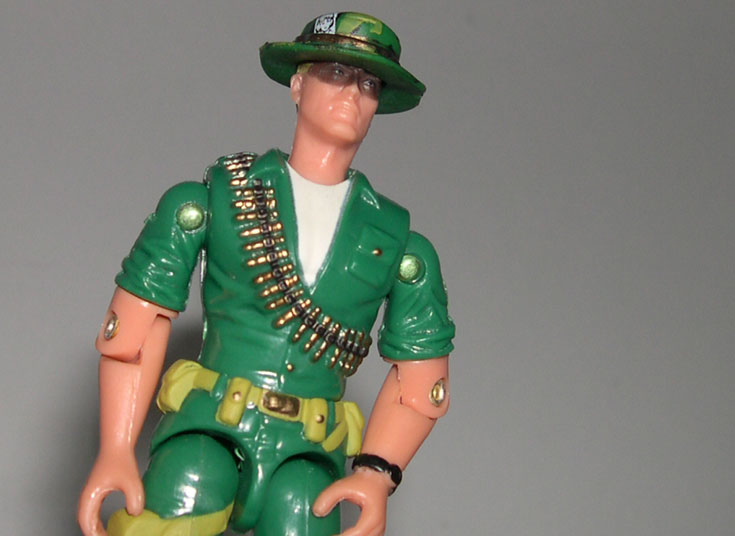 This pack isn't perfect, and even though it really does capture what the comic packs have been about since day one, it's tough to get real excited about figures I won't really use for anything. Still, though, the desire to see Vietnam variations of these characters has been there since that issue's appearence on store shelves for pretty much everyone, and Hasbro has delivered pretty nicely considering the limited parts choices they have access to.

Some of the weapons are lacking, some of the details could have been better, but overall you end up with a nice, cohesive set that will make a great display piece, even if the figures themselves aren't all that new and exciting. Good job, all around, I'd say, although there are still some other comic pack subjects I'd love to see touched upon. 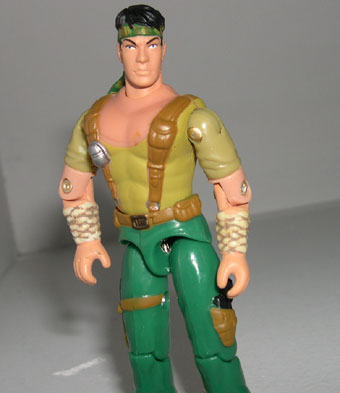 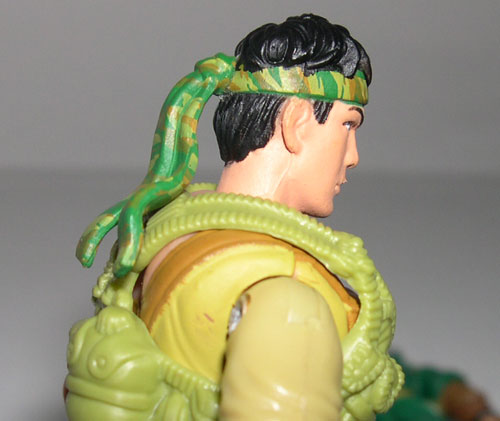 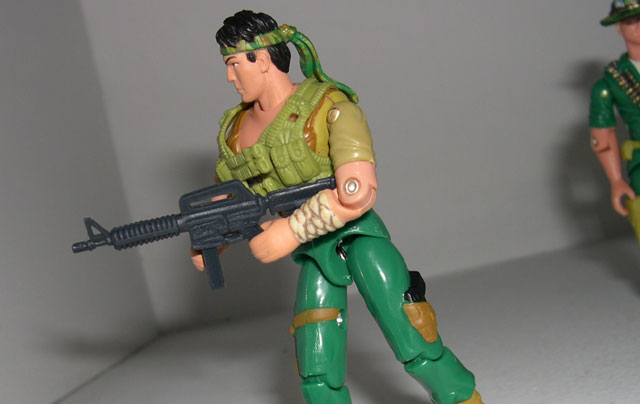 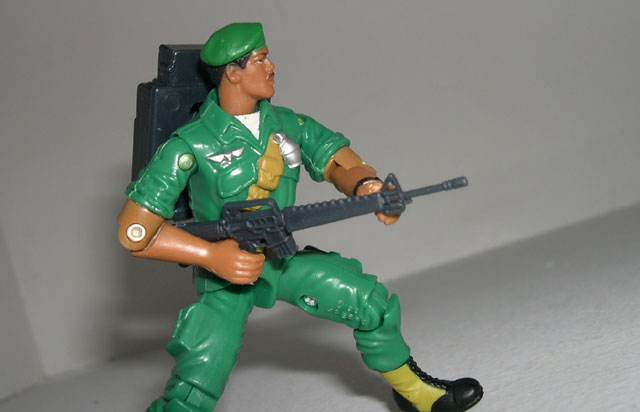 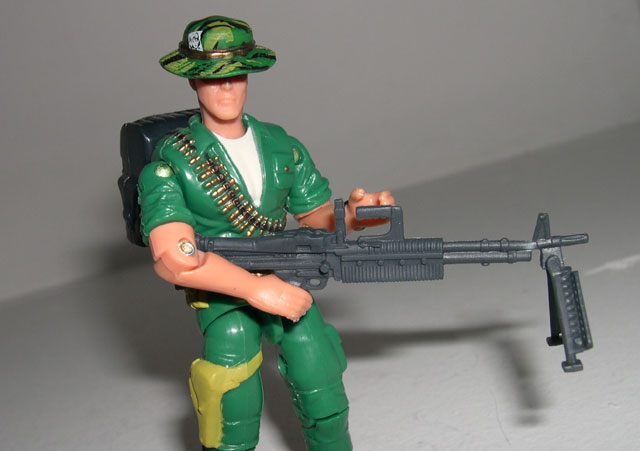 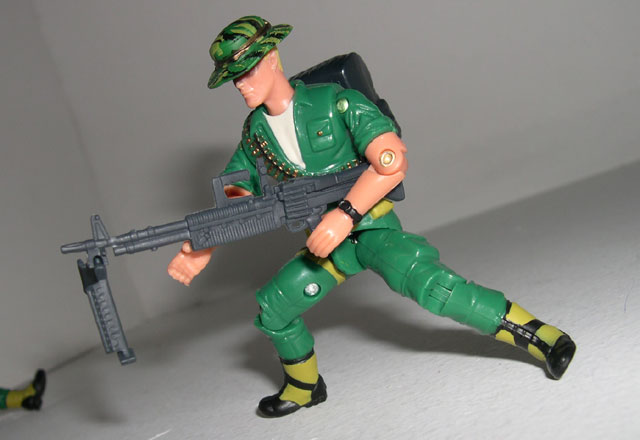 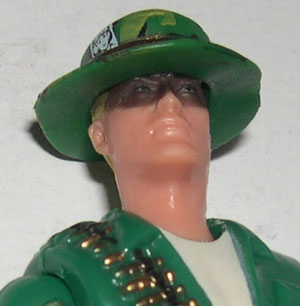 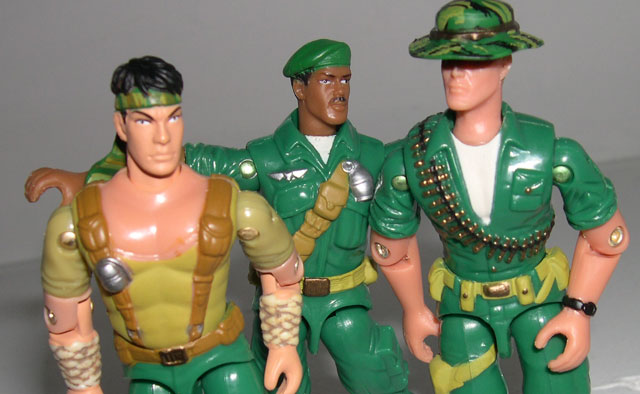 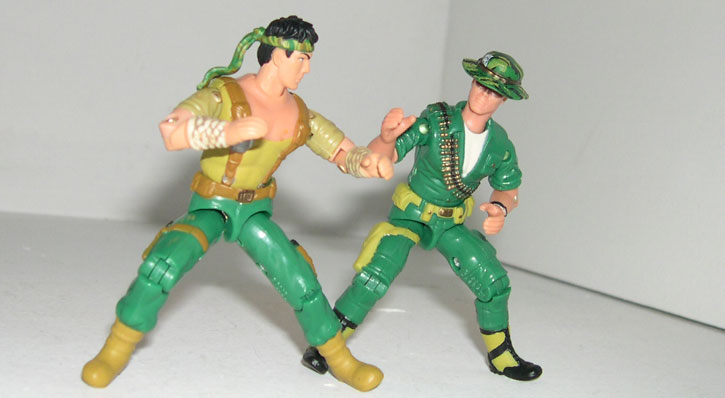