The immediate thought for people when the comic packs started getting widespread release, I would imagine, was one of some manor of relief. Finally, some figures geared towards the collectors...maybe now we won't get Duke, Snake Eyes, and COBRA Commander released every other wave.

Well, I can't really complain, because it took 4 waves, but we now have a Duke (and, of course the requisite third Snake Eyes in four waves).

This fourth wave of comic packs is kind of tough to get my head around, truthfully. All three of the packs are filled with characters that we've seen over and over, and honestly, none of them are really favorites of mine. But it's funny...even with a couple strikes against them, they still manage to impress, for the most part. I will admit, unfortunately, that this particular pack is definitely my least favorite, although there are still some redeeming qualities about it. 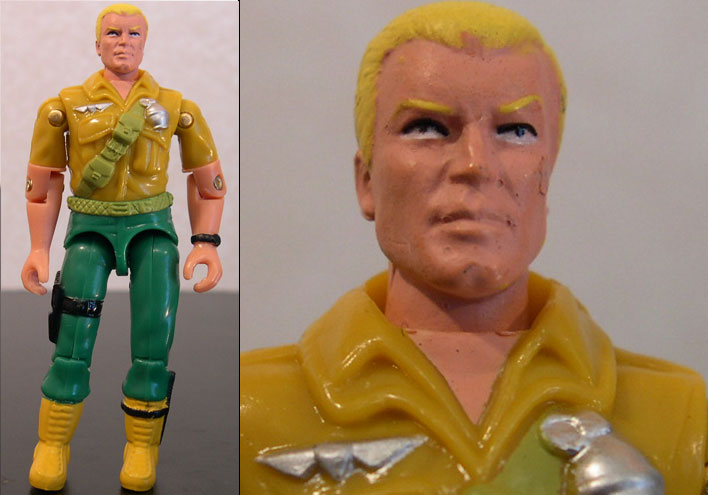 As a comic lover I run into many, many fellow comic lovers who absolutely hate Duke. I'm not sure why, whether it's the exposure he got in the cartoon (over the real leader, General Hawk), whether it was his lack of distinct personallity in the comics, or whether he was seen as a replacement for Hawk...I don't really know, but people just don't like him.

Personally, he doesn't bother me. While the comic is still my favorite media to follow and my continuity of choice, my first exposure to G.I. Joe was through the cartoon...and frankly, seeing Duke kick some butt in the MASS Device episodes really made me love the character right then and there. Saving Scarlett from some COBRA strafing fire...getting captured time and time again...making googly eyes at Scarlett, Cover Girl, and even some random Slave Girl? Duke was like the Capt. Kirk of G.I. Joe. But I think Larry Hama wasn't real wild about him, and he got kind of a backseat in the books, which is actually okay with me, too...there were so many other fantastic characters in the comics that the ones that got so much exposure in the cartoon didn't really need any more.

Okay...that's my story about Duke...now how about this Duke figure? Well, he holds the dubious distinction of being the first comic pack figure that I just plain don't like. There were some others I really wasn't wild about, but I could usually find some redeeming qualities about them...Duke, well he has a much better head sculpt, but the rest of the figure is just nothing special.

From his bright yellow boots and his odd off green pants to his fake short sleeves and odd arm sizes, this Duke just doesn't really do anything for me. I do like the dramatic colors of his shirt, and the neat way his shoulder strap blends with the shirt's color...but beyond that, there really didn't seem a need for this update, other than to find a way to work another version of Duke into the line.

The figure itself is fairly comic accurate (the colorist back then must have loved yellow!) but those arms really kind of kill it. I'm not sure why Hasbro couldn't find some actual SLEEVES somewhere, but as it is, the arms of this figure just look out of place and plain unnatural. I'm still considering just doing a head swap onto the original Duke (if only to get rid of the cocky smile) but besides that, there isn't anything really worth working with on this figure.

His accessories aren't too bad...he comes with the now-standard new sculpt M-16, which is cool...you can never have enough of those. He also comes with a pistol, and a version of Snow Job' rifle. It's this rifle that's the cool thing, since he used it so much in the cartoon...it's a neat little nod to Sunbow, I think.

All in all, though, the figure falls pretty short...there's no way he's getting any playtime as my default Duke, and I'm not even sure if I'll display him, which is a first for these comic packs (most of the rest of the figures are permenantly displayed). 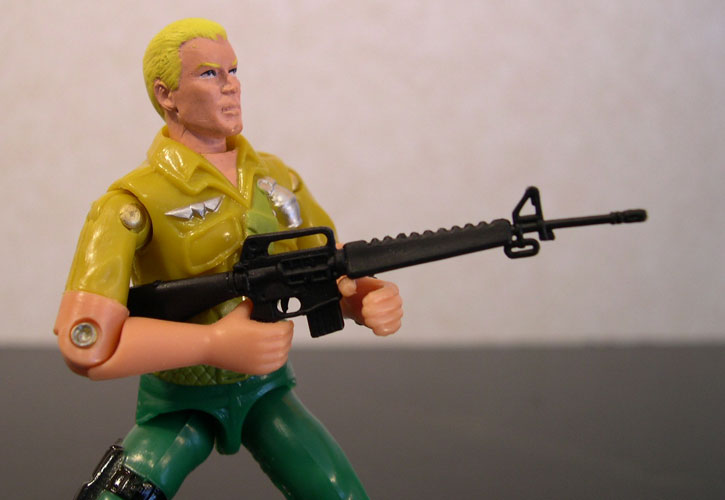 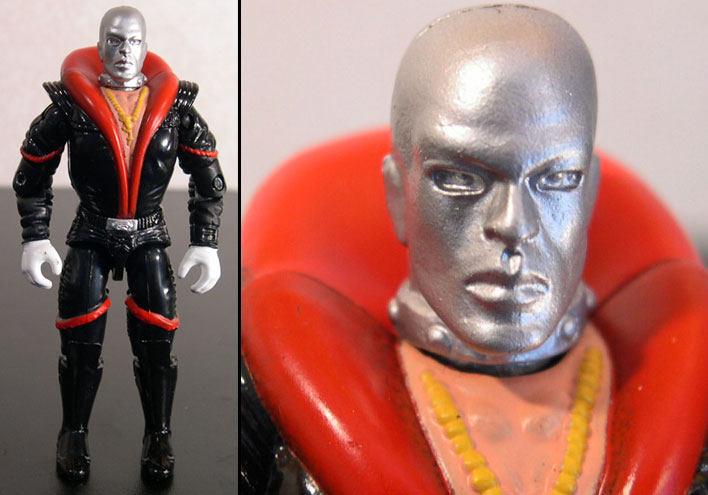 Well, if not for this figure, I really wouldn't find much redeeming about this comic pack in general, which is pretty surprising to me. Recycled, overused figures and figure molds...no real exciting or drastic changes...nice head sculpts, but nothing fantastic. But Destro really looks cool and I like him a lot...all due to his newly sculpted, more realistic looking head.

It's funny, really...this new sculpt head is not really much better than the previous Destro head that was on this body...but with a more static look to his face and the circle of bolts around his neck, this Destro really shines and looks great.

I've always thought this mold had potential...compared to how he's appeared in most media since his release, his fur collar was quite subdued in the original figure. This version really brings it out and displays it prominantly, how it has been seen (especially in the cartoon). However, the figure has always been saddled with that frightening looking little skeleton head that looked more malnourished than threatening. As a result, the figure itself appeared to have a larger than life chest and was way oversized. Well, now, even with this minor a change, the figure looks a lot better and a lot more like Destro should. His paint scheme is pretty much the same as it's always been with this figure, which is fine, although Hasbro thought to add some strange white gloves. Looking at the comic, it would appear they were trying to emulate the silver gauntlets he wore with his missile launchers, but, sorry, it just doesn't really work.

Destro comes with some pretty neat accessories, too...another of the trusty shotgun he's been coming with lately, and one of the Scorpion submachine guns that looks really great with this figure. A couple of neat, decent weapons.

It's pretty amazing what a simple head change will do for a figure...normally I would never consider using this as a basis for any Destro...but with this very cool newly sculpted head, I actually see Destro when I look at this figure, and it could work. It's still not nearly as cool as the Spy Troops one, though. ;) Maybe if Hasbro had chromed his head, I might change my mind...but at this point, that version is still my favorite. 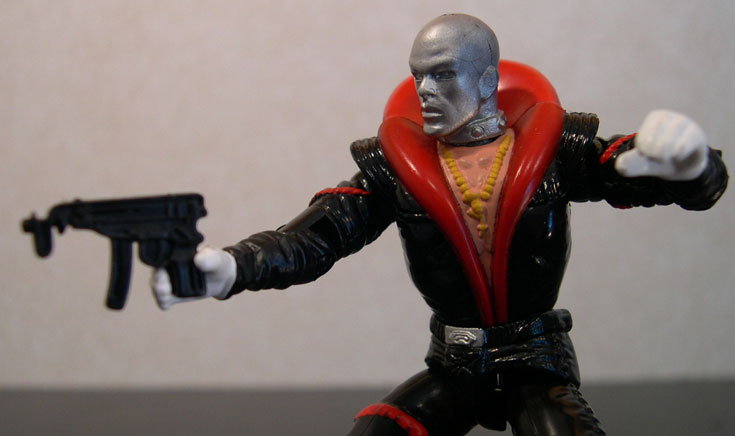 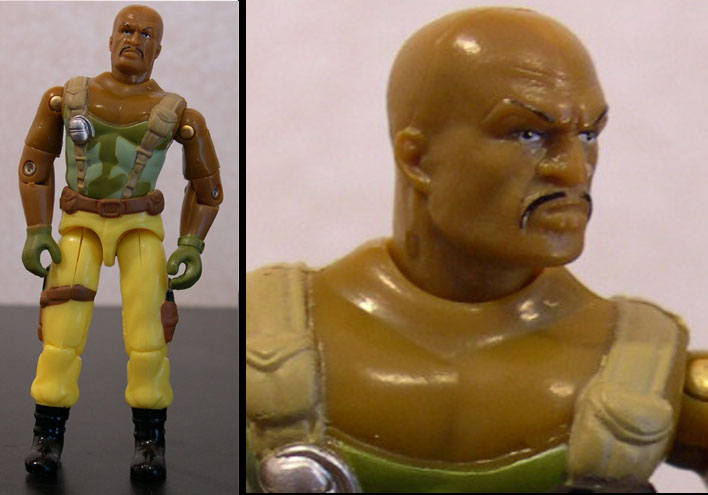 So, Duke I really didn't care for...Destro was pretty neat...Roadblock kind of falls right in the middle.

Roadblock works here...he does. He looks accurate to his appearence in the comic (yeah, he was wearing yellow pants in the book, believe it or not) and the other minor color changes really bring this figure to nice life. I love the new head sculpt! A much meaner, angrier gourmet chef/machine gunner and brings a LOT more character to the figure.

He comes with his familiar heavy machine gun and tripod (but no backpack) which is nice, and comic accurate. His yellow pants are also accurate, but very bright in person...the yellow here doesn't really bug me as much as it does on Duke, though...here he does look somewhat natural. Still, when compared to figures like the Battle Corps Roadblock, this one just doesn't seem imposing...doesn't seem like him.

I really have mixed feelings here. The slim, dated mold certainly doesn't look like Roadblock, but I can't help but smile when I sit back and look at the figure. He really does look like Roadblock and the minor changes really make a great difference.

Sure, we do not really want or need another Roadblock figure, especially based on a 20 year old mold that doesn't do his size and strength any justice...however, it comes together quite nicely and just based on a different head sculpt this figure looks terrific. Even the overly bright yellow pants look quite cool, and that, with the combination of his newly designed camouflaged shirt and straps, adds a vibrant look to this old figure, and really makes it pretty nice. 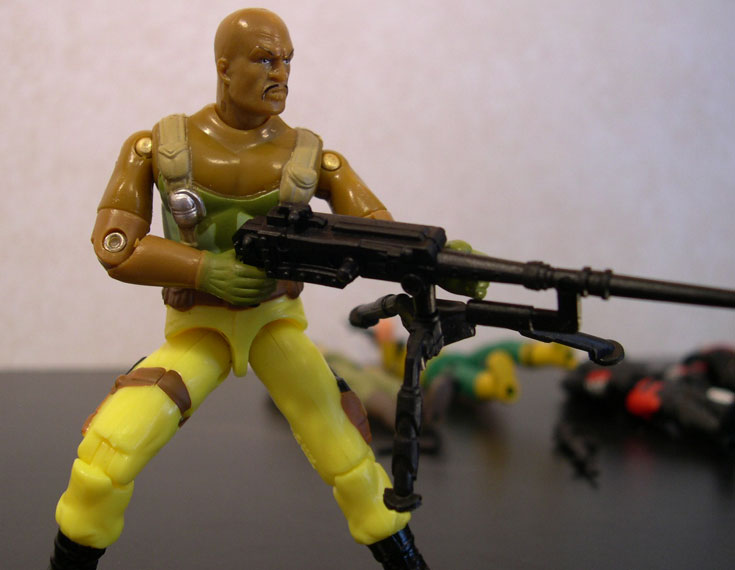 Unfortunately, this pack is kind of a miss...really a first for the comic packs. I like Destro, and the other two have great new head sculpts, but I had no real desire to re-explore their classic looks and they really aren't that successful.

The range of accessories is nice, and overall they aren't really bad figures...just don't really blow my socks off, which unfortunately, I've become accostamed to with the comic pack figures. 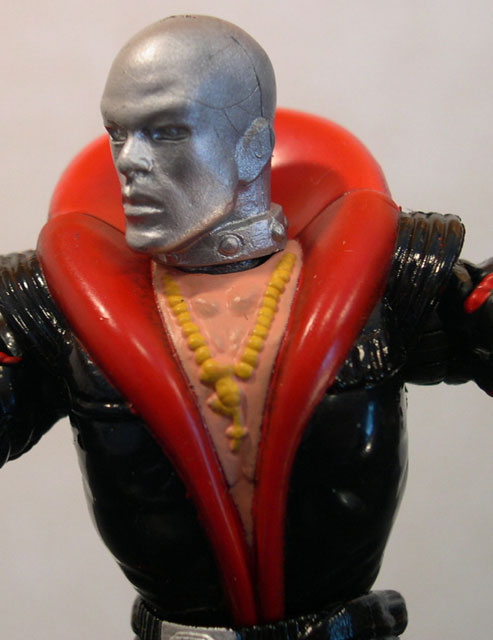 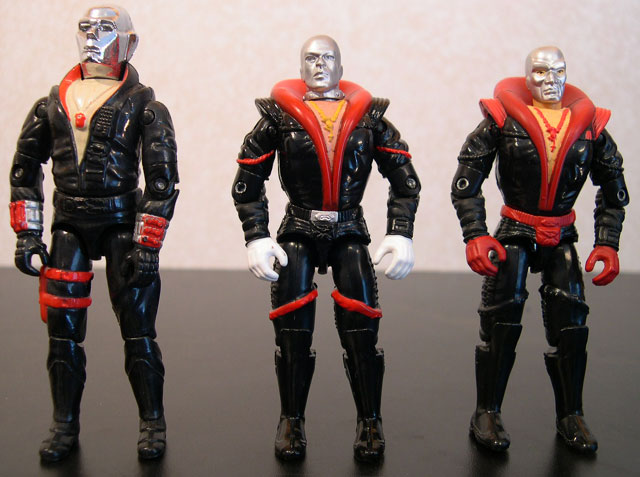 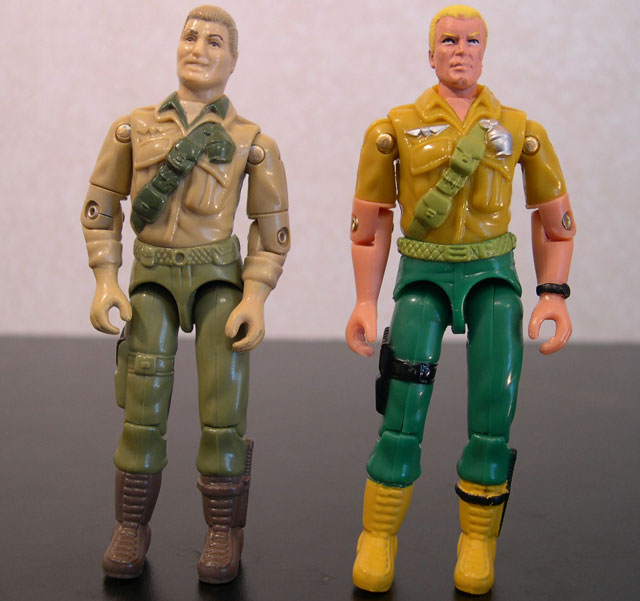 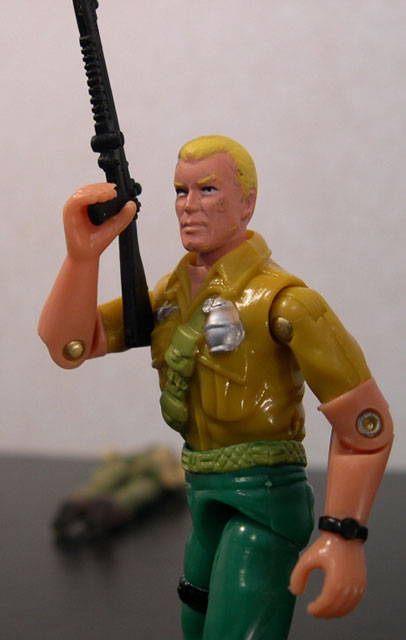 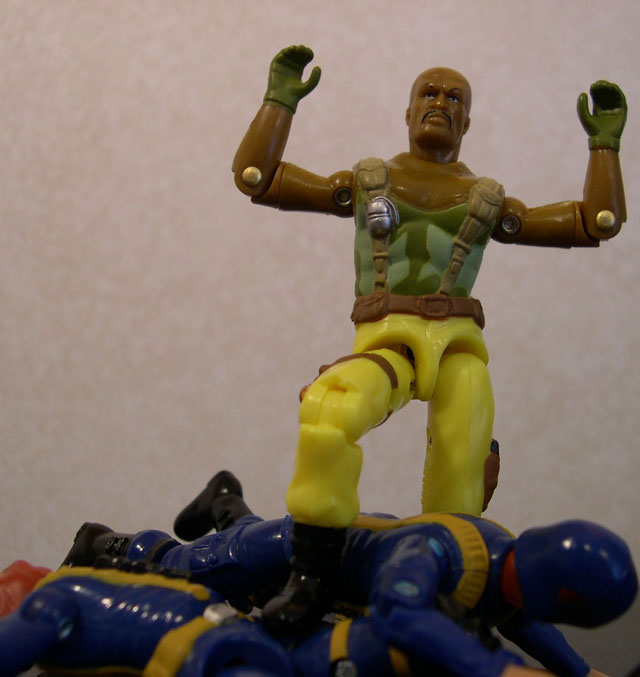 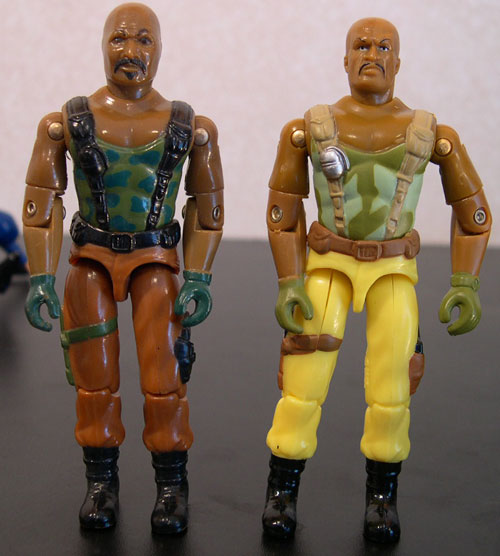 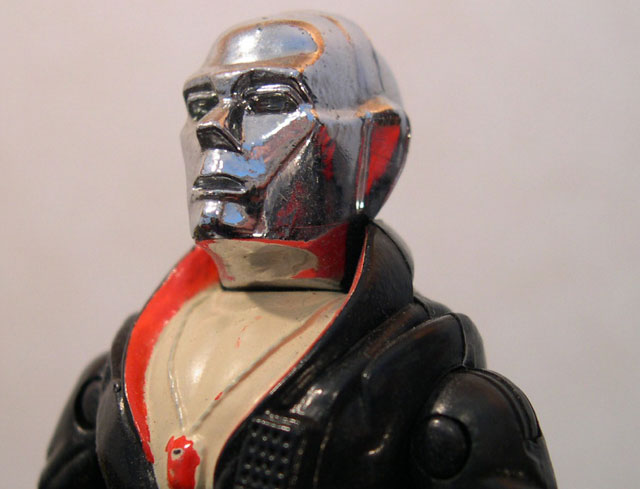 Well...I got my old school Destro out and I just couldn't resist!