Without a shadow of a doubt, issue #21 is the pinnacle of G.I. Joe storytelling, and pretty darn close to the pinnacle of story telling in general in comic book format. Widely revered (for good reason) and often imitated (Marvel recently did a "silent issue month where every issue emulated what this book did 20 years ago) but never quite matched. It was inevitable that Hasbro would dip into this issue to do some new comic pack figures, and I really hoped they'd do something new and different.

Well, they pretty much dipped into the well of figures we've seen, but were able to do some interesting stuff with them. 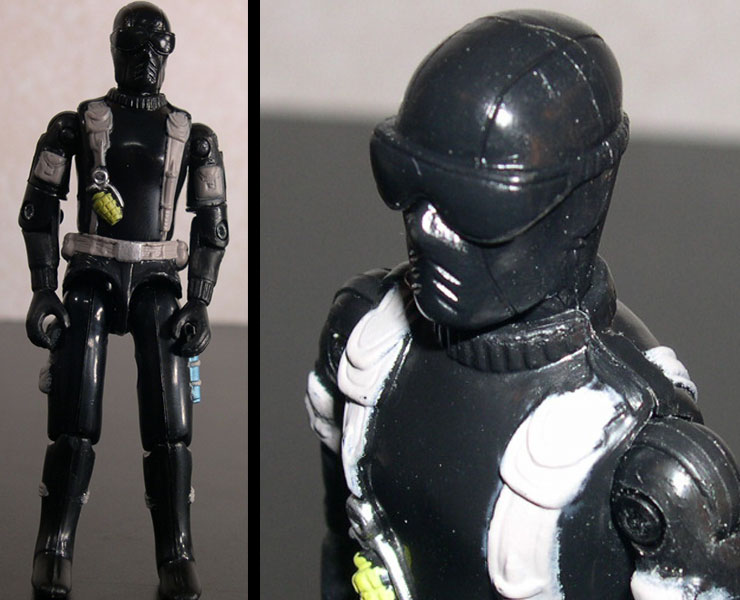 First of all, we have Snake Eyes. Well, of course...it was only natural that a Snake Eyes would get made with this issue, I mean he is on the cover and everything. The figure is quite basic, using his familiar 83 mold that was used for his last figure as well, but at least Hasbro thought to sculpt him a new head.

The new head is very nice and pretty cool...very reminiscent of Snake Eyes' original look, but with the more detailed sculpting work of the current design team. The combination of the goggles and hockey-mask style facemask work very nicely together and overall the new head sculpt works well.

The rest of the figure is...well, fine I guess...just nothing special. We've seen a black Snake Eyes in this look so many times over the years...so, so many times, there just doesn't seem to be anything new you can really do with it. We got what is essentially the same overall figure in '82, '83, '97, as a Toy Fare Exclusive in '02 (I think), and in the issue #4 comic pack. That's five basic black Snake Eyes using this mold and basic color scheme...now we've got number six. I mean, this figure has a black base with gray straps...same as three of these other versions of the character. This new one has a lighter gray, and some more vibrant color changes for his various accessories, so he does stand out, but is still essentially much the same figure as we've already seen.

His accessories are decent...pretty normal. He's got a grappling hook, Uzi and new sculpt sword. All of them make sense within the confines of the issue, and they're all pretty nice weapons. At this point, though, even with a new head, Snake Eyes is Snake Eyes...there really isn't much new stuff you can do with him. 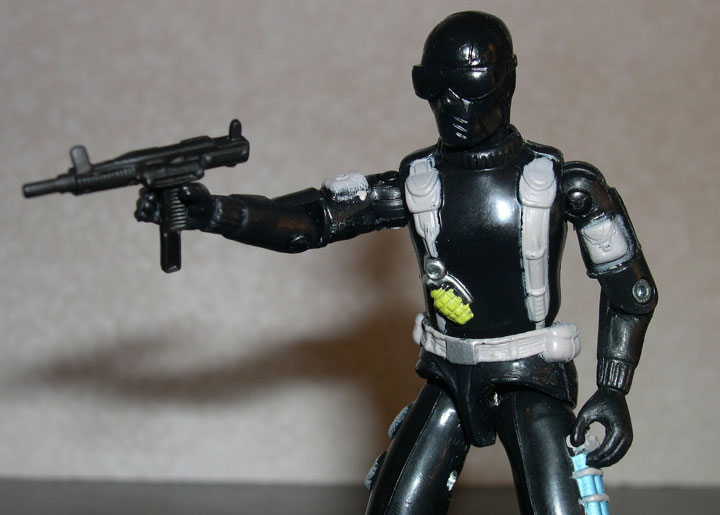 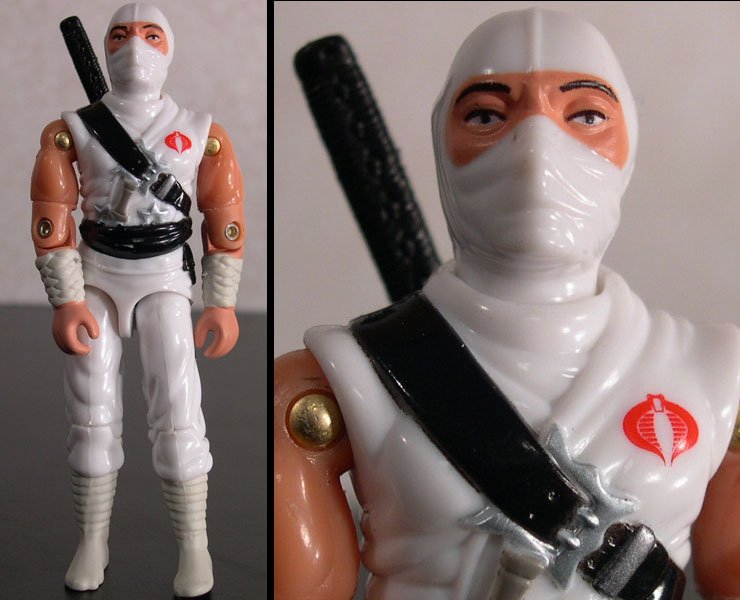 Next we take a look at Storm Shadow. Well, we've seen this mold numerous times as well, but I have far more patience here, because we've never really gotten a direct update of the classic '84 Storm Shadow. In '97, he had some strange black camouflage...and in the Ninja set from TRU last year we had Black Dragon ninjas and Red Ninjas...we even got the Ninja Viper in the 90's. But, the stark white version of the original Storm Shadow, as he's best known, just hasn't been done. Well, now it has, and it looks pretty darn good.

Hasbro also remolded some arms for him, so he no longer has short sleeves, and instead is sleeveless, which looks very, very cool. I do have an issue with the fact that they didn't really sculpt him a new head, though. Stormy's original head just looks kind of big and clunky, especially compared to the other comic pack figures, and I just think they could have done some really awesome things with him! As it stands, it's a pretty minor complaint, but I just keep looking at Firefly's wicked head sculpt and wishing they had done the same sort of thing with Storm Shadow, if only to make him look a little more modern.

Still, the rest of the mold is straight up '84 goodness and still looks great. A mixture of traditional martial arts uniform with his arm wraps and leg wraps...twin sashes with the weapons tucked inside here and there...small little details, which provides an awesome update. Since a lot of people run into problems with their classic Storm Shadows yellowing, this is a great option to update your favorite COBRA villain without spending big bucks on eBay.

The colors are familiar, as they should be, and comic accurate...it brings the mold together nicely and really screams Storm Shadow, as it should. Very nice update to Stormy...I just wish we'd gotten a new head sculpt.

His accessories are somewhat bare, but still fit in the theme of the issue, with a simple sheath and sword that fits snugly inside. Really, though, he doesn't need any more than that and the overall figure really looks nice. 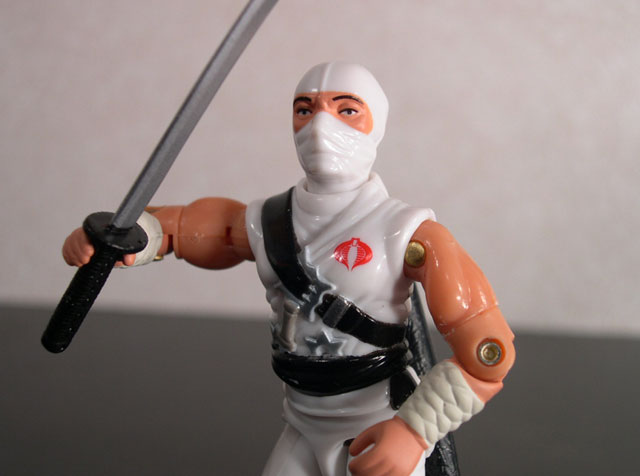 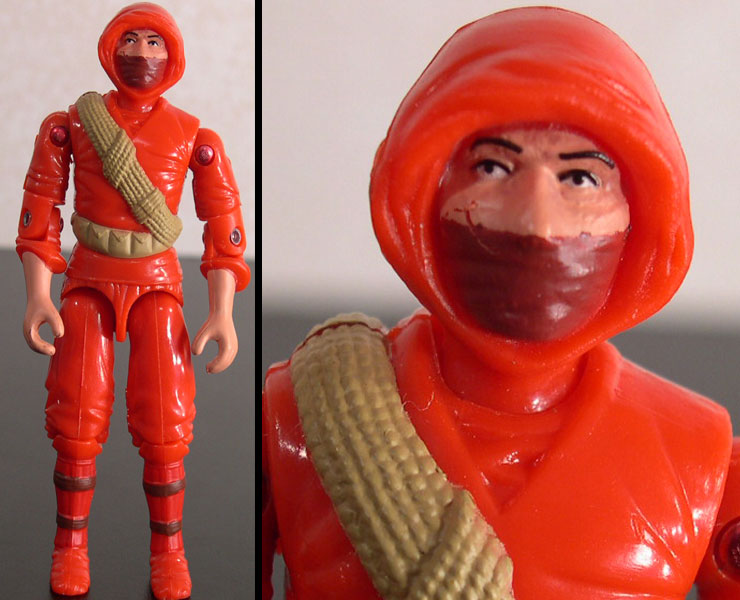 Red Ninja Viper goes along the same lines as Storm Shadow. We've seen this mold recently in the TRU ninja set, but they seem to do a different thing with it here. Unfortunately, it's not really successful, in my mind.

This is a terrific mold, don't get me wrong. The '88 Stormy is nearly a perfect update to the original, with nice, improved details, a slightly bulkier body, yet still maintaining a terrific martial arts feel. Unfortunately, using this as a Red Ninja doesn't really work for me. The head sculpt is off (again, Hasbro could have made an awesome impression by resculpting a new head) and the uniform itself just doesn't look quite right. The Red Ninjas in the comic are in simple, straight forward red uniforms...somewhat baggy masks, but a very simple ninja look. This Storm Shadow repaint is overly detailed, overly presented, and just doesn't look like the character should look. Unfortuantely, this is a big sticking point to me, because the Red Ninjas are among the characters I've always wanted to see represented faithfully in comic book form. Now that Hasbro has done three different versions of them, and still never gotten them right, I'm a little antsy. I was hoping that perhaps the comic pack would be a chance for Hasbro to go the extra mile and bring us a nice, faithful version. Unfortunately, we just get another red coat of paint on an existing mold. Somewhat disappointing to me.

The red color is nice and vibrant, and that part of it does work well. I do like the trim throughout the figure and the other color choices do make sense. It's not really a bad figure...it does look like a Red Ninja...it just doesn't especially look like THE Red Ninjas.

The weapons he comes with are pretty nice, though...there are two bladed weapons and a single sword that he's packaged with, and they all look very nice. 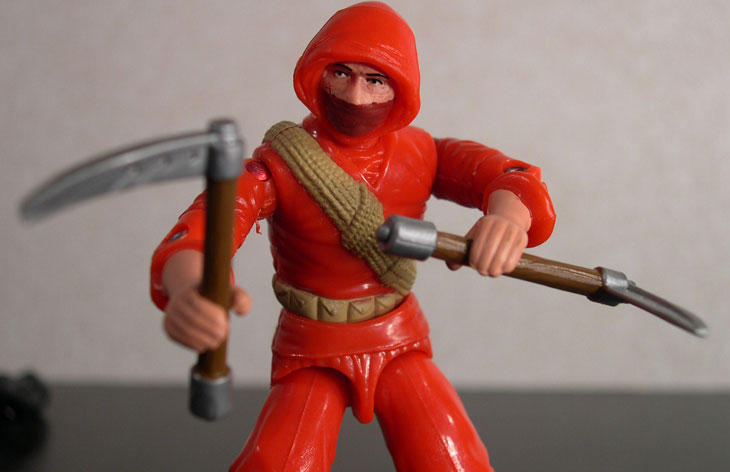 Hasbro started off the comic packs really, really strongly. Powerful updated molds, great, accurate accessories, and some very nice, surprising mold choices. Well, it seems as if they're almost falling into the same rut now. Molds we've all seen in the past year...only spotted resculpts...figures simply repainted and passed off as other characters when they don't really look the part. It's almost a shame.

It's tough to criticize, since the figures are great. They just seem to kind of be going with the flow now...instead of some surprisingly awesome and accurate Oktober Guard figures, we have more of the same molds with some minor changes that don't really work.

I still really want to see this line continue...there is so much untapped potential that I fear, with the hiatus of the main line, we may never see reached. So many new and exciting characters available, I almost hate to see the last wave of comic packs saddled with the same old characters we've seen countless times, many of which didn't really NEED an update. Don't get me wrong, the packs themselves are still executed very well and look quite nice...they just seem to be ending on an "eh" note. 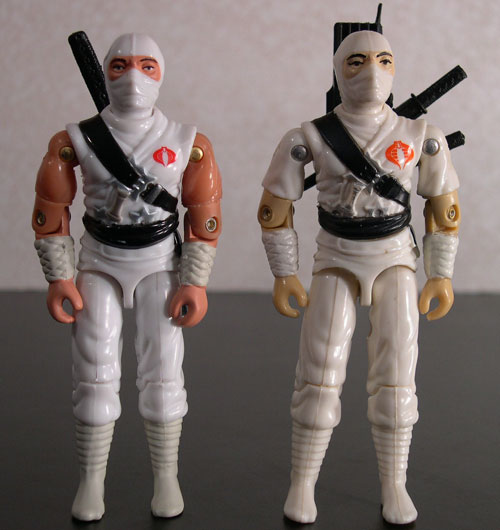 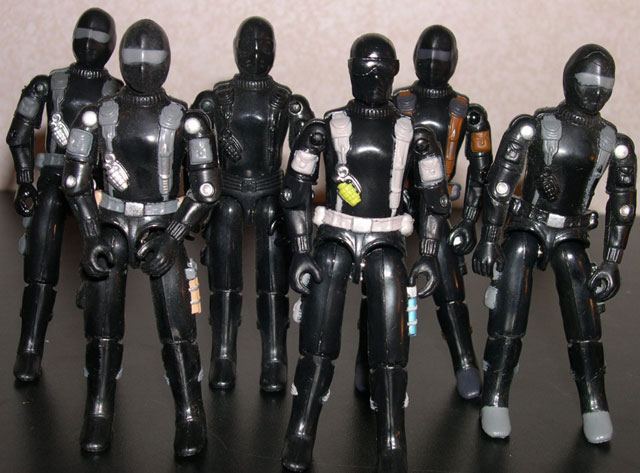 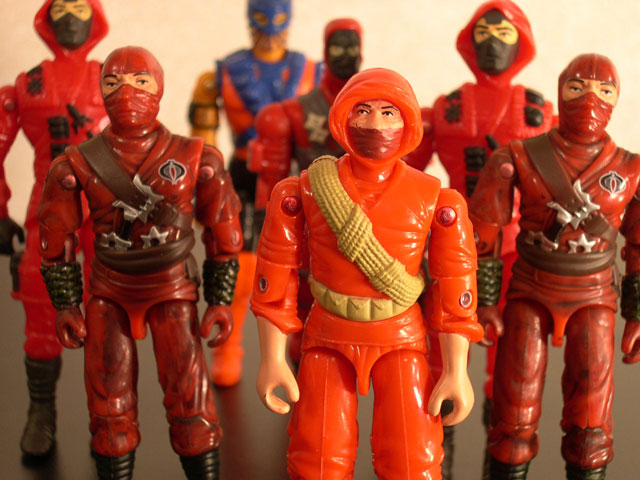 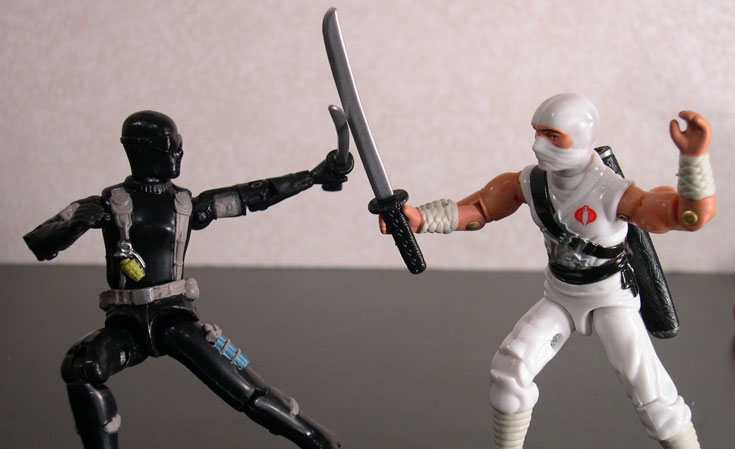