A lot of kids saw characters that they didn't have as figures on the page or on the screen and sat back and wished for toys to be made of them...I wasn't one of them. When I saw a character on screen or in the comics that they didn't make a figure of, it annoyed me to no end, and I just ended up not liking the character at all. Sparks, the Greenshirts, and the bearded Admiral Keel Haul especially got my hatred as a youngster...but even on the comics pages I grimaced when I saw Kwinn, Dr. Venom, and Scarface taking away valuable page space from someone who I could buy on toy shelves and actually act out the adventures with. It wasn't until I grew older when I realized the depth of character that these particular people showed and that the early comics weren't just 22 page toy commercials...they actually tried to tell a story, and sometimes that story relies on background characters.

Steeler for some reason was a character that never really caught on to me (or to many other people, I wouldn't think). It's odd because he was a pretty unique character, especially for the first series of figures, using a mold similar to Clutch, but with some crucial differences, and some nice, bright colors, plus a helmet/visor you didn't see anywhere else. He came with a great motorized tank and is a pretty neat, unique original figure.

The comics never really gave him much spotlight either, if I remember correctly. He was shown as being a really strong guy (as armored vehicle drivers would need to be, I'd think) but never really showed a quirky side like a lot of the other Joes did. He got featured quite often in the first few issues, but as the series ran on, he pretty much faded away, most likely because he got no new figures.

The head sculpt is a nice one here as well, which has quickly become the norm with these comic packs. It looks like a Trimpe-styled Steeler, very comic accurate, and with his cool helmet and visor in place. Hasbro took a cue from themselves back in the day, and used the same mold that they've already used for Clutch--the Mace mold from the final years of the classic line. It worked pretty well for Clutch, and works for Steeler, too, making him appear larger than some of the others, which matches his more muscular appearence from the comics. The chest holster/pistol combo doesn't look 100% accurate to how it was shown in the books, but good enough for appearances, any way. Steeler's head looks a little less "pinhead" than Clutch's did in the first series, possibly due to his helmet and visor, but whatever works.

The green/tan color has been a point of some controversy for this figure when prototypes were shown, and I'm happy to report that the straps and such on Steeler are a nice, muted tan and not the bright, blinding yellow that has been shown recently in eBay photographs. His hands are also bare, not saddled in yellow gloves either. His visor is still white, but it doesn't look that bad and all in all, he blends in pretty darn well with the rest of the re-released 13 we've had so far. 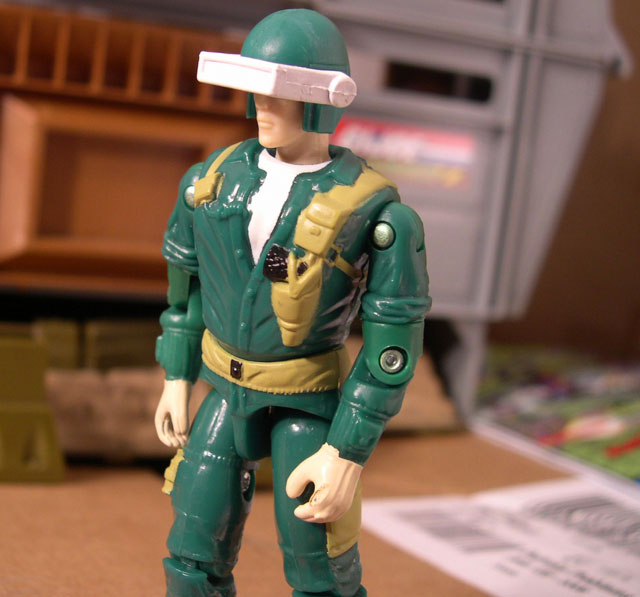 General Flagg was, surprisingly, not a character that I ever really hated. Even while I cursed Kwinn and Dr. Venom, he didn't bother me, mainly because he was such a sideline character. He just sat back at Joe HQ and tossed out orders without really doing anything. Even when he fell in COBRA's attack on the PITT, I was almost sad to see him go, even though the event really proved as a turning point in the Joe mythos. That first 19 issues really brought G.I. Joe into what made it great and pretty much defined out it would run. We got looks into characters that couldn't possibly be portrayed on small filecards, and saw some of our favorites in action. The fact that characters so vital to those first 19 issues might soon finally make it to plastic form really makes me happy, and I keep my fingers crossed that Dr. Venom, Kwinn in his jungle fatigues, and Scarface will soon arrive in a comic 3-pack and make me a happy kid 20 years later.

As for this figure...how well does it represent General Flagg? Well, it's pretty nice, surprisingly enough. I really wasn't sure that the Headman body would work in this capacity. I mean, how can a gangster's "zoot suit" function as a high-ranking General's dress greens? I don't know, but in this paint scheme and format, it really, really works. It's unfortunate that they most likely don't have access to molds like Gung Ho's dress blues or something of that nature, because that would be the PERFECT body to use, but let's face facts...there are a lot of molds Hasbro has lost, and I can only assume that this is one of them. The Headman body still works great in a pinch, and looks like a dress suit should look. Once you start looking a little deeper, it doesn't look quite as convincing, but considering what Hasbro has to work with, I think it looks good over all.

One point of major contention for me with this figure, though, would have to be the filecard. Even though Hasbro has designed this figure as the original General Flagg, the filecard they include is a recycled version of the Flagg filecard from 1992, which is the original Flagg's son. :/ I don't pay too much attention to a lot of the rehashed cards these days, but this kind of bugs me from a QC standpoint, since the card they include is of a completely different character. 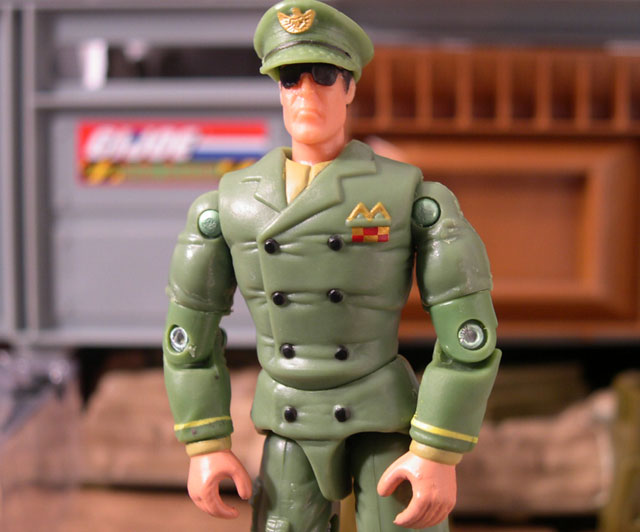 While I don't think anything will match the greatness of the COBRA troopers that were offered in the Infantry 6-pack earlier this year, I am quite stoked to see comic-accurate Officers hit the pegs to go with the troopers offered in the last series. For whatever reason, the COBRA troops always had a light blue/tan color scheme going on in the comics, even though the figures never maintained those hues. In my neverending anal-retentive quest to have comic accurate figures, the fact that COBRA troops didn't match always bugged me a little bit. Especially when it came to a major character like Scarface, who was pretty important. Not only did he not get a figure himself (yet, any way...) but you couldn't even use a regular trooper as him because his comic-style uniform was so different.

I know, I know...I must have had no imagination as a kid!

Anyway, now we have some officers to go with our troopers, plus we have a nice solid base for a pretty easy Scarface custom without much paint alteration on the figure. The COBRA Officer mold still is surprisingly effective even after all these years, with a slim design and the cool web-belt straps running over his chest. I always liked the Officers much better than the troopers...they just stood out more and seemed cooler all around, which is, I suppose, what Officers should be, right?
He is represented pretty well here in his light blue uniform and tan straps, fitting in with the comics as he should, and also meshing with the comic pack troopers. Perhaps one of these days I'll have a big enough budget to acquire armies of each, but if Hasbro keeps releasing figures this often, I'm not sure that'll happen!

Even though it's not an real stretch mold-wise or paint-wise, the figure works and is a cool COBRA compliment to the five Joes that make up the rest of the second series of comic packs. 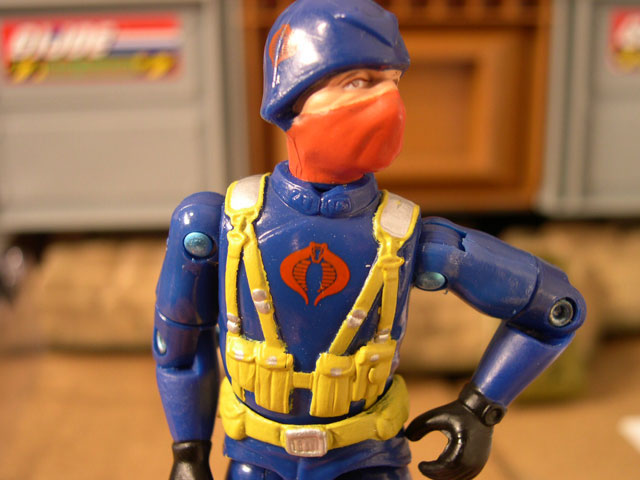 I'd say the second series is pretty close to as successful as the first series was. With both, there were great figures, not-so-great figures, and figures that make you scratch your head. Considering what molds Hasbro has to work with, I'm not at all surprised that the results end up somewhat mixed...there are only so many options, after all.
Here's hoping that as the comic packs continue to sell well, more money is invested in them, and we end up with some figures with more re-tooling (like the upcoming Horror Show) to really capture the essence of the character in the books.

Hasbro is off to a great start, let's keep this ball rolling! 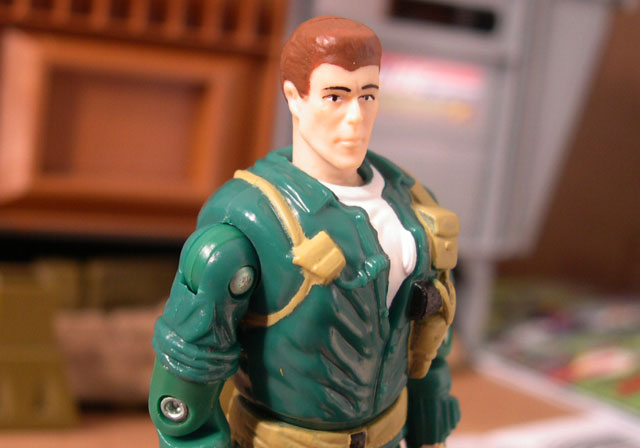 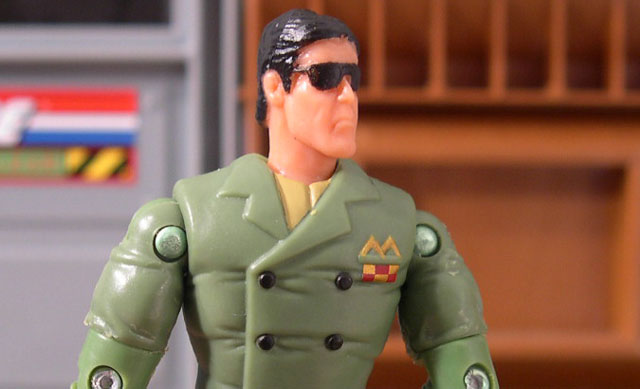 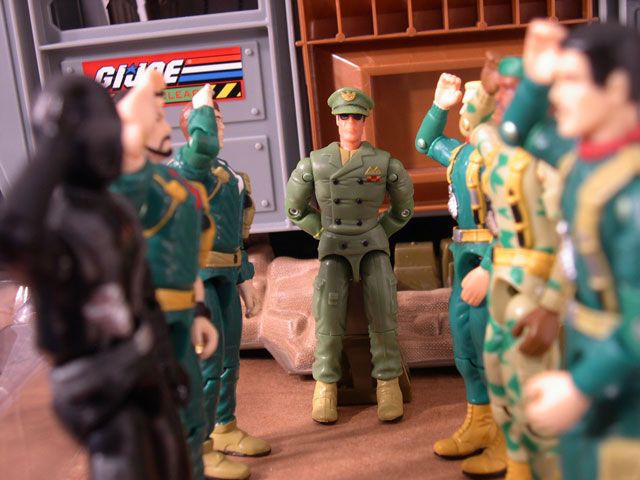 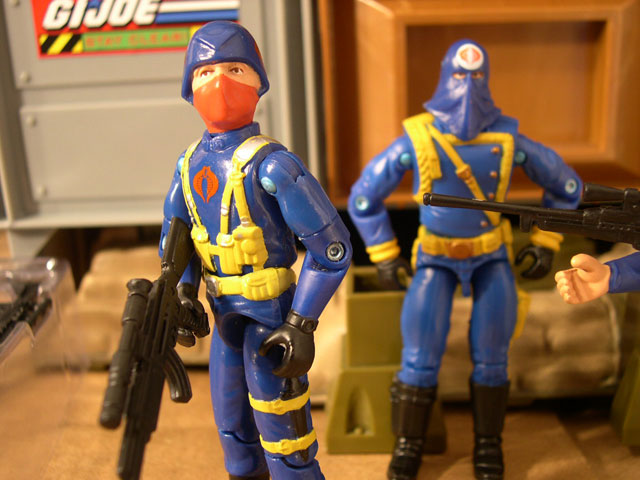 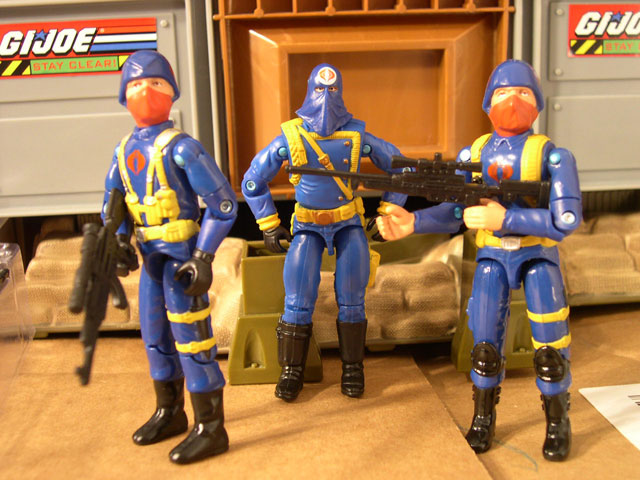 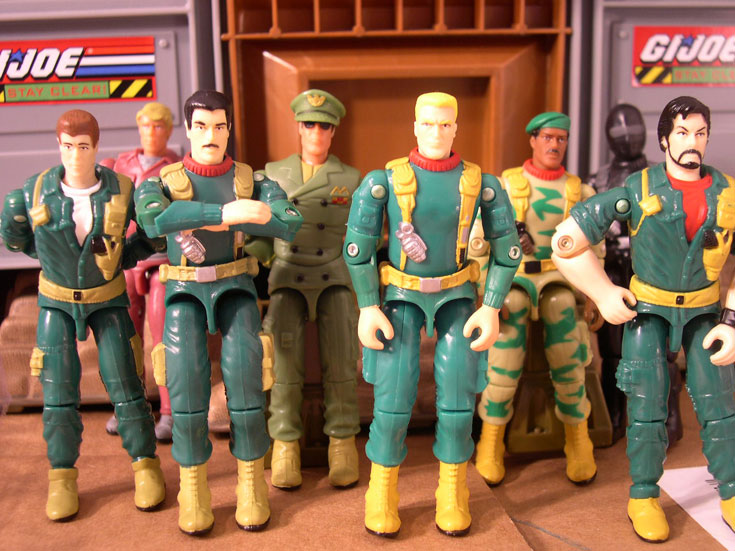