So, here we are...another run of the ever popular comic book 3-packs. Who would have thought only a year ago that I'd be posting reviews for three packs geared strictly for collectors and specializing in producing figures accurate to their comic appearences. It seems like a collector's dream, not something I'd actually be holding in my hands.

One year ago, I never would have expected to already have a Kwinn in my collection, now a General Flagg, and with the full compliment of the Oktober Guard waiting in the wings. PArt of me keeps thinking that something will go wrong...these sets won't sell as well as Hasbro hoped and they will cease production before getting to the really good stuff like Grand Slam, Dr. Venom, Jungle Kwinn, or Billy. Believe me, I hope I'm wrong, but time will tell for sure. Maybe next year at this time I'll be reviewing Serpentor as he appeared in issue #50, or maybe even a Hard Master, Soft Master, Young Master three-pack. Hey, it is a dream, after all. 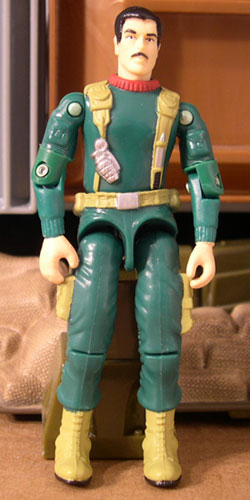 As I've mentioned throughout my reviews of these comic packs, comic accuracy (or lack thereof) always bugged me when reading those old books, especially when it came to facial hair. I can appreciate the limitations the sculptors had back then, and it's a credit to them that even with those limitations they could give birth to the greatest action figure line in history. But as a eight to ten year old kid, I was bugged that my Breaker was bearded when the comic was clean shaven, and that my Zap looked absolutely nothing like the cool Zap that appeared in the pages of my favorite comic.

Well, Breaker's coming and Zap is already here...however, Zap's success is somewhat mixed. The most important part of these figures is definitely the new sculpted head, and in that regard, Zap is definitely a success. His head is slim and ethnic looking, as it should be, and he sports the all too familiar pencil-thin moustache that I always wished the original would come with. It's a great head sculpt, which is very important.

However, I'm not so wild about the body, mostly because...well...it's not Zap's body. Zap has always sported the light green uniform with the horizontal strapping over the chest and twin shoulder straps. This version of Zap comes with the standard knife/gun straps found on Grunt, Hawk, Snake Eyes, Breaker, and well...almost everyone else. This difference seems especially odd since the prototype of Short Fuze showed him sporting the correct torso, which makes the fact that Zap doesn't have it all the more confusing. This generic torso makes the figure just kind of blend in and looks more like a customized Hawk than his own unique character. A brighter color green and the correct torso would have made this version of Zap pretty much perfect. As it stands, it's still a very nice Zap, but I was just hoping for him to look somewhat different.

His main weapon is another shortfall. I can think of a huge number of great rocket launchers that Hasbro could have equipped him with...instead we get a HEAT-Viper launcher. Not only is it a COBRA weapon, but it's a huge, elaborate gun that doesn't look anything like something Zap would (or could) carry. A normal bazooka would have been great, but it wasn't in the cards, I guess. He does come with a large number of other weapons, like a sniper rifle, machine gun, etc..., but a Zap without a decent bazooka just doesn't seem right.

All of this adds up to a good figure that could have been great. Don't get me wrong, I love the fact that Zap is here and looking as he should have back in the day...I just think there are a few changes perfectly within Hasbro's capabilities that for whatever reason they just didn't quite get together. 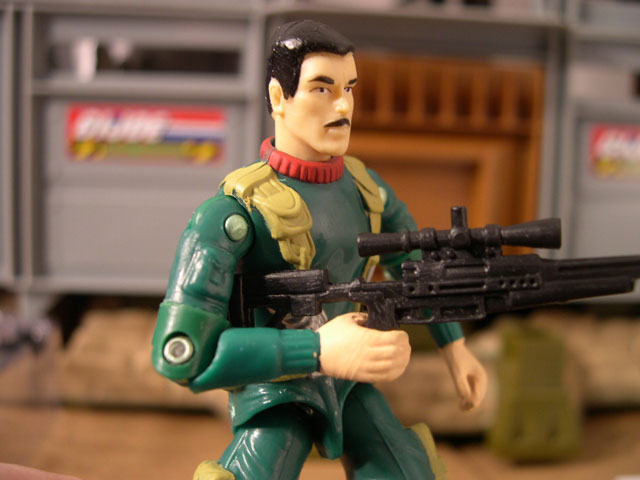 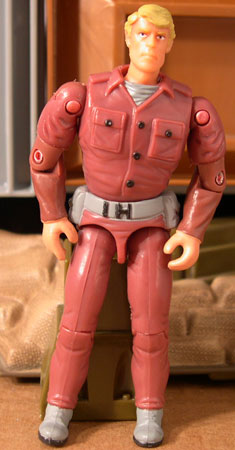 Well, here's an argument against Hasbro following the comic continuity and just releasing figures for every issue of the comic. Some issues have characters that just really don't need to be seen in plastic form. "Undercover Grunt" is one of them.
I'm happy to see a new Grunt, but at the same time I can think of no real reason why I would need a Grunt in my ranks wearing a brown shirt and pants. This is a figure that was made to fit into such a particular moment in time that he serves little purpose doing anything else. I realize Hasbro is trying very hard to match events in the comics, but figures like this (and Scarlett in her martial arts uniform from the first series) just serve to hurt the packs in the future. Collectors like G.I. Joe because of their versitility. Their articulation and loads of accessories allows us to use them how WE want to use them...that's why we don't like sculpted poses and unique figures...because it locks them into one moment in time and kills our imagination, which is something we love when it comes to Joes.

Grunt would have been much better to see in this pack in his standard uniform. Give him Zap's body and give Zap his correct body, and no one would have complained. As it is, this figure doesn't excite me...and the fact that he's constructed with a ball joint torso means I can't even customize him easily with an old school body. I like the parts used...the Action Soldier parts are decent and pretty realistic, but I just don't see a reason why we need to waste a comic pack figure with something so unique and distinctive that he can't be used in any other function. 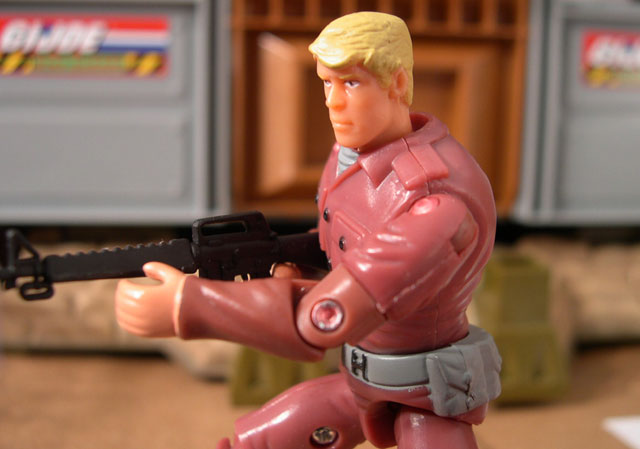 Can't go wrong with Snake Eyes, huh? Well, Hasbro hopes you can't, since they release him on a pretty consistent basis, and he remains the corner stone of the Joe universe, like it or not. I'm somewhat glad to see them releasing another Snake Eyes that's more useful than the arctic one that came out in the last series, but I'm honestly not sure what they think they can do to improve upon this version of everyone's favorite commando.

Back a year or two ago, ToyFare released a Snake Eyes/Scarlett two-pack...this was the perfect rendition of the version 1 Snake Eyes. Jet black uniform with some gray thrown in and leathery brown straps in the right spots. It really hit the mark for me, and became the best version 1 Snake Eyes I'd ever seen. Well, it still is.
This repaint of Snakes does at least go a few steps beyond the very first Snake Eyes, which was just an all-black figure. At least this version has some splashes of color here and there to liven up the mold somewhat. Of course the colors are mostly grays and silvers which really makes this figure look a lot like he did in 1997, which is okay, I guess, but nothing new and exciting. 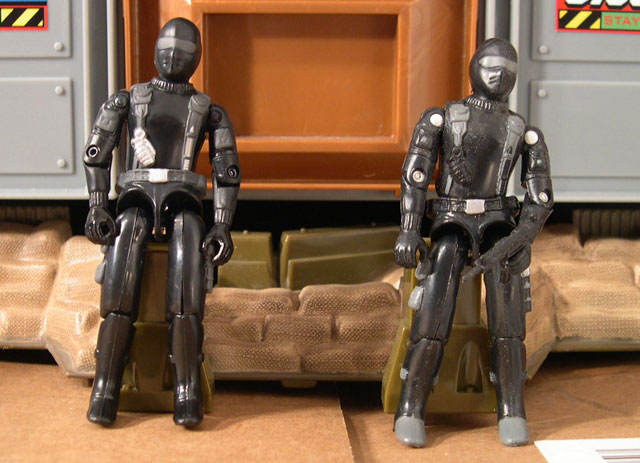 We can't really expect perfection out of these sets, I've decided, and as long as Hasbro is relegated to using older molds with limited new tooling, we're not going to get anything 110% comic accurate that every fan is going to love.

I think with what Hasbro has to work with so far they are doing a nice job, although this particular set suffers from some problems. A too-common version of Snake Eyes, and a Grunt figure that doesn't prove very useful in every day situations ends up giving us a set that is 2/3 nothing special and only 1/3 cool. Not a very good ratio, unfortunately. Hasbro does cram a whole lot of accessories into these packs, which is always good...that new sculpt M-16 appears in this set as well as issue #5, and is a terrific new weapon.

All in all, I'm quite pleased to see these packs hitting shelves, and wish nothing but success...I think things can only get better from here. 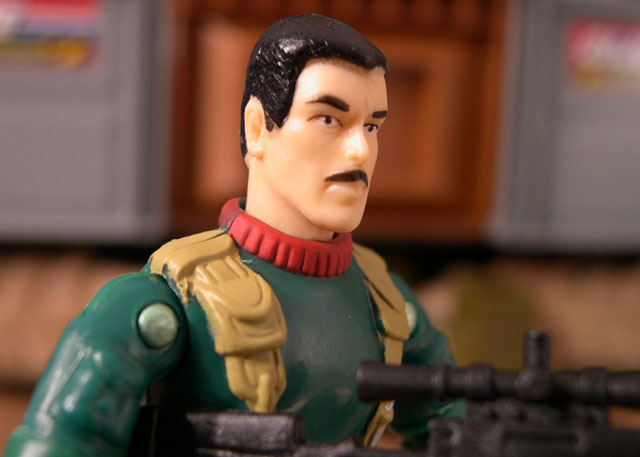 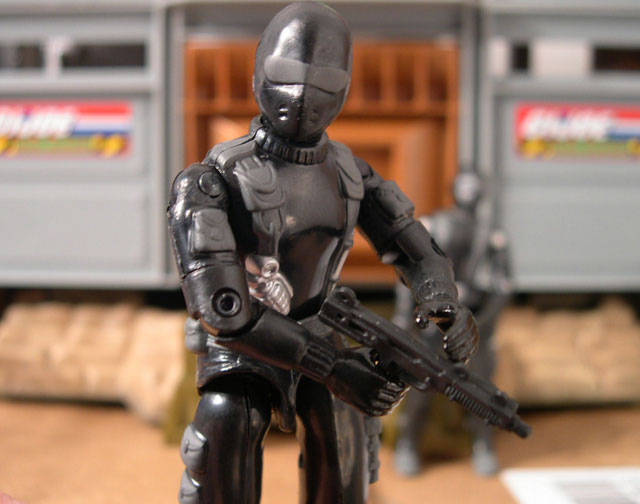