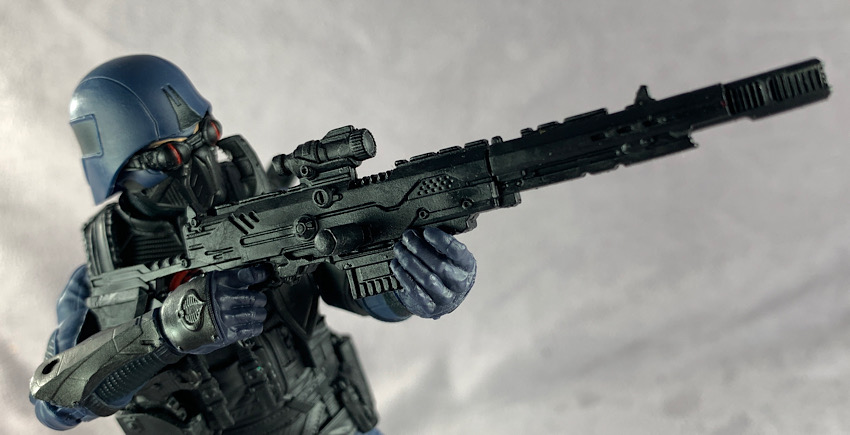 Well… most of the figures, anyway.

I don’t have my hands on Baroness (yet, but she’s coming… THANK YOU BEN AND MARK), but while waiting for her, I wanted to get reviews posted for the three figures I do have.

First and foremost, I have to give a HUGE thanks to guys like Ben, John, John, and Chris from The Full Force who have all helped me immensely in getting these figures in hand. Without a local Target store, it’s been a challenge to say the least, and without these great friends in the Joe community, I would have paid through the nose on eBay, which isn’t a fun way to collect.

Fair warning – I try to stay out of the grousing about Target schtick in my reviews (though it does get mentioned here and there). These are meant simply to talk about the figure execution and not the challenges, difficulties or hassles in actually acquiring them.

You can check out the reviews at the links above and they’re all linked on the G.I. Joe: Classified Review Page as well.

G.I. Joe: Retaliation delayed?  Warm up with the action-packed second episode of G.I. Joe: Initiate!  Episode One aired a short while ago, and now  Episode Two has been posted on YouTube.

Born from the minds of some true G.I. Joe fans, we continue the adventures of a captured Beach Head and the sinister machinations of Cobra.  Check out Episode Two embedded below!

Of course, Episode One is still online, if you need to catch up:

I for one have been pestering all of my buddies at Coil Con for some info about G.I. Joe: Initiate, which was shown there for the first time earlier today, but nobody was biting.  Well, now Episode 1 can be seen by all.  Action packed and in High Definition, I strongly recommend you find a way to view this on the big screen.

YouTube apps are available for Playstation 3, X-Box 360, Apple TV, etc…  and I think watching this on a television screen only made it even cooler.

With Beachhead, Chuckles, and Major Bludd taking up most of the screen time of this first six minute episode, I find my mouth watering to see some more action.  Looks like Episode Two will make me VERY happy.

Check out the first episode embedded below, I think you’ll enjoy it as much as I did.  This is GREAT stuff.  Again, check it out on your TV screen if you can.  It’s worth it.  Great work by everyone involved.  As always, stay up to date on future episodes at GIJoeInitiate.com and on Facebook.  I suspect they’ll be getting a lot of traffic starting now!

We’ve been talking about the G.I. Joe: Initiate fanfilm for a while now, throughout the entire Kickstarter campaign, up through their various character reveals, and now it would appear that production on Episode 1 is complete, and G.I. Joe: Initiate launches for the first time at Coil Con 2012 September 8th!

The film should hit YouTube very shortly thereafter, so hopefully for all of us, by this time next week we’ll have seen G.I. Joe: Initiate.  Directed by Fred Doss, who has the distinction of being the victim of both Cobra (in G.I. Joe: The Rise of Cobra) and the Decepticons (in the 2007 Transformers live action film) has a long and storied film background, and I’m excited to see him translate that into a high quality G.I. Joe fanfilm.  Lots of military folks were involved in the making of this production, I cannot wait to see it.

To stay up to date and get all the skinny behind the film, check out the links and info below:

Again with thanks to Gyre-Viper and his desire to provide discussion points and better detail for community analysis, we have the last two figures in the first G.I. Joe: Retaliation Ninja Showdown 3-Pack!

I will warn everyone up front…  brace yourselves for Roadblock.  Folks who are excited for the figure may went to temper their feelings a bit before checking out the review.  And also please keep in mind that these are early samples.  Things could very well change for final release.  I tried to cover both of those bases in my review, but also had to give the figure it’s analysis based on how I received it.

Now if that didn’t scare you too much…  check out my G.I. Joe: Retaliation Review Page or hit up the links below.