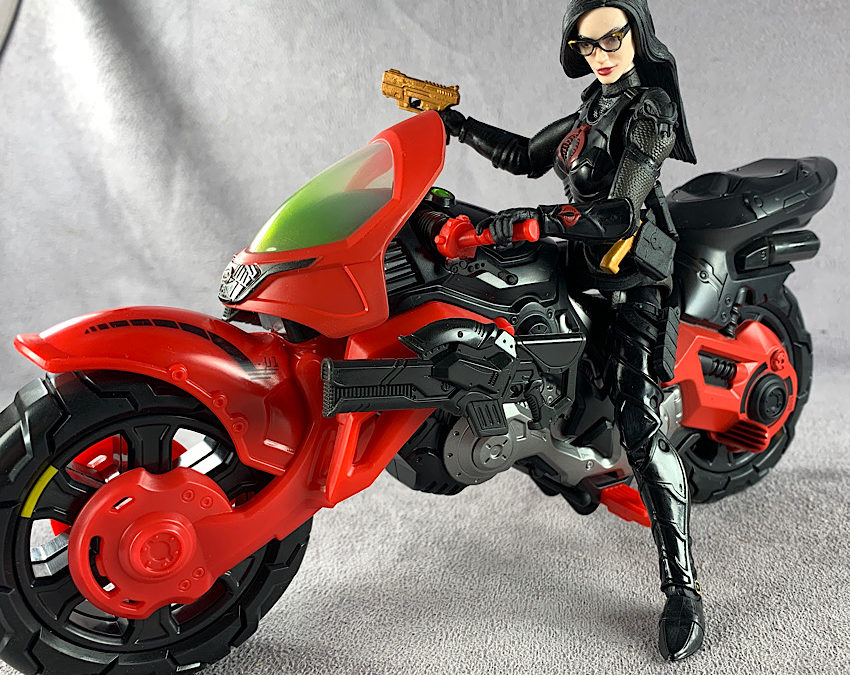 When it rains, it pours… I was starving for new Classified figures shortly after getting my hands on Wave 1, then I blinked and suddenly there were 4 new items from Target, Profit Director Destro, Amazon Storm Shadow, and Wave 2 all seemingly hitting at once, and suddenly, I had a review backlog!

Well, hopefully over the next week I’ll start digging through that backlog. The Target exclusive COBRA Island Baroness with COBRA C.O.I.L. motorcycle was first on the docket and that review is up now.

Go ahead and check out the G.I. Joe: Classified Review Page to take a peek, then keep watching over the coming week or so as I dig through the rest.

The standard Premium Format Baroness figure garnered a ton of attention when it was revealed by Sideshow Collectibles sometime ago, and now they’re putting out a Crimson Strike version in red!  It’s a very cool looking collectible and it’s up for pre-order right now!

Good morning!  Some technical issues got in the way, but I have now posted a report from Mysterious Stranger, who was kind enough to travel to San Diego and cover ComicCon for GeneralsJoes.  As we know now there wasn’t much in the way of new information from Hasbro, but Sideshow Collectibles was on hand with two brand new figures to show off (The Baroness and Major Bludd) as well as in hand samples of some other upcoming figures like Snake Eyes and the Crimson Guard.

Mysterious Stranger took plenty of pictures and spoke with some Sideshow Collectibles representatives.

Click the read the rest of the story link below to read the report and see the great images from the show.

END_OF_DOCUMENT_TOKEN_TO_BE_REPLACED

Big thanks to Kenny on Twitter who pointed us in the direction of this YouTube video from Hot Chix Cool Toy Reviews that spent some time talking to Sideshow during ComicCon, and got some great info on these upcoming G.I. Joe figures straight from the source!

According to Matt from Sideshow, The Baroness has multiple portraits as well as multiple removable glasses options, both really cool touches from the toy maker.  The G.I. Joe related content is at the 7:30 mark.  Check out the embedded video below.

ComicCon starts with a 1:6 scale sized BANG from Sideshow Collectibles!

It’s only preview night, but already we’re getting some G.I. Joe related intel hot off the presses!

Sideshow Collectibles has their booth rolling, and contained within are an incredible looking Baroness and Major Bludd!  The head sculpt and robotic arm on Bludd are especially bad ass, but Baroness is certainly no slouch either.  Both figures look amazing and are currently on display at booth #1929.

The folks over at HissTank.com have already begun posting images, and I’ve mirrored a few images from Sideshow on Twitter below as well.  I’ve got someone on site in San Diego who will be reporting back with his own share of intel and images as the weekend goes on.  You can check out HissTank’s images right here, and if anyone wants to send some others along, I’m listening!