While you will consistently run into the popular opinion in the Joe fandom that dictates G.I. Joe's best years were in the early 80's, there's something to be said for what Hasbro did in the late 80's as well. COBRA especially seemed to hit a renassaince period in the late 80's, and in 1989 especially there was an explosion of specialty troopers in the COBRA ranks that pretty much defined COBRA as not just a small scale terrorist organization, but as a potentially full fledged evil empire.

Additions like the Alley-Viper, HEAT-Viper, Track-Viper, Aero-Viper, and Annihilator and TARGAT for the Iron Grenadiers really started beefing up COBRA's ranks and giving them a much more diverse appearence. These new troops not only came in a wealth of different specialities, but in a wide array of different color pallets as well...some good, some pretty bright.

Of course, two other COBRA troops that came out in that timeframe were the Night-Viper and the Frag-Viper. Night-Viper has always been a fan favorite figure, with a very nice detailed design and terrific color scheme. Frag-Viper on the other hand, as nicely muted as his colors are, he gets a bad rap for his oddly shaped helmet and other strange figure aspects. Are these successors to the original versions worthy releases? It's kind of a mixed bag, but I'll give my input below. 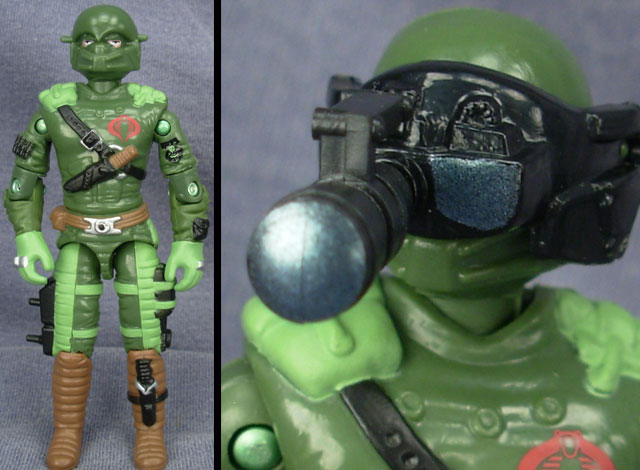 We start off with the Night-Viper. To be totally honest, the original Night-Viper was pretty much the pinnacle of Hasbro design during the 1989 series. The figure had a very special ops feel to it, but was still indisputably a COBRA troop. With a nice array of accessories (though far from perfect), and an extremely well-detailed sculpt, it's tough to find fault with the '89 Night-Viper, and I have to say this new figure suffers a little bit because of that.

The mold obviously holds true, being the same one that was used over fifteen years ago to create the original Night-Viper. Immediately the head sculpt gives you a great vibe, with a nice, wide, well detailed helmet that almost completely covers the face, yet retains a very distinctive feel. With nice sharp angles and a cool design element, the helmet is very effective, both from a protective sense, and an asthetic sense.

With fine, well sculpted details throughout, the Night-Viper keeps this pattern of greatness throughout the rest of the figure, with nicely padded leg armor, a great looking flak-vest like tunic, shoulder pads, air tanks, and more nicely sculpted details than you can shake a stick at. As I said, pretty much the pinnacle of Hasbro engineering in that frame of time. Not only that, but the amazing color scheme really brings this figure to life, especially considering the sometimes obnoxiously bright colors his trooper comrades were saddled with along the same time. Figures like the bright orange Alley-Viper and Annihilator, the yellow and purple HEAT Viper, and many others around the same time really showed what Hasbro focus groups of the time were telling them. Bright colors = sales. Whatever the rational behind the bright colors were, the Night-Viper is infinitely successful due to it's dark green and black colors, and I cannot think of a single way to improve on that figure. And essentially, this figure really does not.

It's hard to go wrong with the Night-Viper mold, and it is used very well here, but the color scheme here is a lot lighter in shade (made to match last year's Jungle Viper by the looks of it) and you end up with what is a pretty neat looking figure, but when you break it down, it's not as cool as the original, which makes it tough to rationalize the update.

That's not to say that the figure does not hold any appeal at all, however. I do still find myself nicely drawn to the light green, tan, and black color scheme and it does look nice, although not quite as "night-like" as the original, and unfortunately this figure does not come with any of the great camouflage paint applications that the Frag-Viper does. You can't argue that the paint apps are meticulously applied, and there are a large number of them, and you end up with a figure that at least looks really neat, even if it is somewhat inferior in functionality to the original. 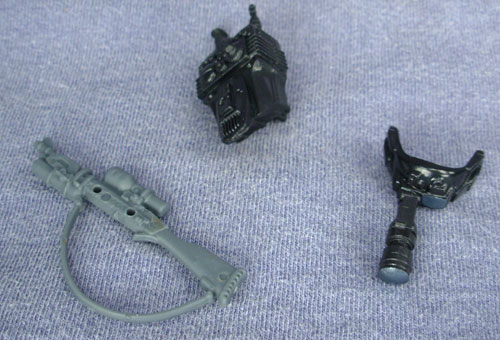 The Collectors' Club does a pretty good job with the accessories here, too, even though I'm really not a fan of the shotgun that Night-Viper came with originally. The visor, monocle and backpack all are very cool as they have been since '89, but I still am not a fan of that gun. It does fit nicely on his leg, but the style of the weapon (making it very hard for the figure to hold realistically) combined with the funny gray color that the club colors their weapons in just gives me a mixed feeling with the gear in general. Ultimately the figure is neat, and I do like the new color scheme, but it isn't really so much of an improvement over the already fantastic original. 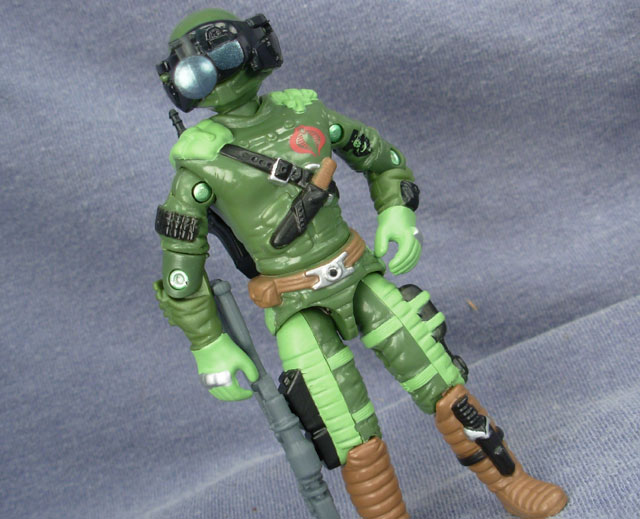 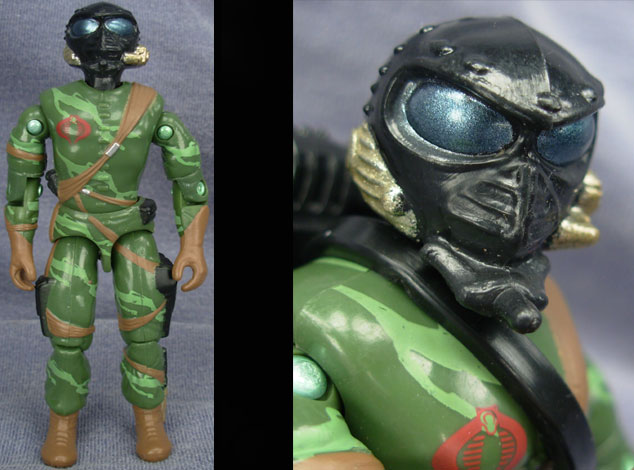 Frag-Viper is the next subject of the review, and is without a doubt the highlight of the two-pack, no doubt in my mind. While I've always loved the Frag-Viper figure, a lot of people have had issues with the bug-shaped helmet, funky uniform design and very specific specialty. His accessories were very neat, although pretty out of the ordinary, and when you combine it all, you get a character and a figure that just kind of has a mixed following. I really like the color scheme of the original Frag-Viper with the nice brown uniform and very cool blue-ish sash with the black boots, etc... The metallic texture and paint apps of the helmet are really neat.

Somehow the Collectors' Club took this figure that I liked a whole lot originally, and made it even cooler. It's not just slapping green paint on it, though...that's not enough. They manage to take some very nice elaborate paint apps, some colors that you might not consider, and really end up with a terrific looking Frag-Viper update, something that they didn't quite manage with the Night-Viper.

First of all, the helmet still remains the same buggy-eyed strangeness, but now cast in dark black with gold tubes and amazing looking blue metallic eyepieces, you get a much spookier and much effective looking headsculpt. The mold itself retains the nice '89 bulky look and the simple, yet detailed mold shines in this new paint scheme.

Frag-Viper's got the nice broad chest of a lot of the late 80's COBRA troopers, with large muscles, nicely wrapped cloth sashes, straps, gloves and boots. The sculpt is utter simplicity, yet the Collectors' Club paints it in such a way to make it vibrant and exciting. He's got a nice green base, again painted to match the Jungle Vipers from last year and the Night-Viper in this set, and the lighter green camouflage paint applications are flat out terrific. I'm not sure how realistic the camouflage pattern is, that's not really my specialty, but the patterns are great, and I love the looks.

MC uses a duller brown color pallet on the straps and sashes and it ends up mixing really well with the rest of the colors on the figure. It looks really, really great.

While the Collectors' Club was unable to get many of the original accessories that Frag-Viper came with, I think they did a decent job with what was available. They ended up retooling the character-specific grenade launcher, which was very cool, I thought, as it really adds a neat individual look to this particular COBRA trooper. Big Ben's grenades fit nicely in it, too, and I love how they included the bag of grenades and the Range-Viper launcher and backpack...even though they're not the same accessories as the original, and even though we've seen these accessories a little too much over the past few years, the weapon choices DO make a lot of sense, which is more than can be said for Hasbro's own offerings over the same time period. 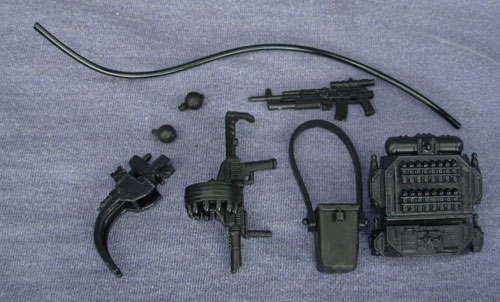 You end up with a very, VERY nice update to the Frag-Viper in this set, and the green color actually lends this character to potentially be used as "Letal", a South American exclusive that can perhaps now work in conjunction with the new COBRA Mortal coming out in this summers' Con set. Any way we can get South American characters into the US mythos is terrific in my book, and I'm going to take that and run with it, perhaps in the near future in dio form. 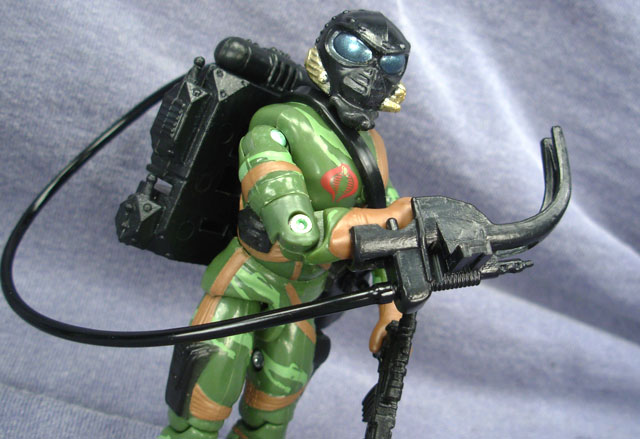 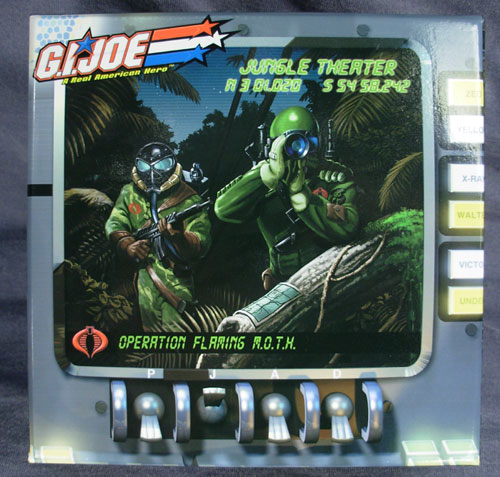 I would be remiss if I didn't mention at least something about the box that these figures come in as well. While the whole subject of boxed vs. unboxed items has been a heated debate over the past few months, you can't argue that the presentation of this set is just fantastic. The box is a great high-quality box, just like the convention boxes we've gotten over the years, only shrunk down. There's a nice foam insert inside which fits the figures perfectly, and the box itself is pretty small and easily stored.

Would I prefer unboxed figures for a cheaper price? Yeah, definitely. Joes are meant to be played with, and I think the bulk of collectors would much prefer unpackaged figures for less expense, but at least if MC is going the boxed route, they've been very successful with this one. Nice presentation, overall, can't wait to see them all together.

I do think that this whole packaged vs. unpackaged debate needs to be brought to the Club's attention at this year's Convention, however. The fact that we received one boxed item last year, and now all of a sudden it seems like a lot of things are getting carded or boxed, it just seems to be heading towards a disturbing trend. While presentation is key, I think Brian and the Club in general would be very surprised at just how much more open Joe collectors would be to loose figures at a reduced price. While I'm happy with my $32 investment here, if I could have just gotten the troopers without any box for $18.00-$22.00 including shipping, I probably would have bought several sets. It would have gotten the Club more money AND more stock sell through. As it stands, I don't think the majority of collectors are at all happy with the new boxed/carded trend, especially if it increases expense, and if we want it to change, we need to tell Brian as much at the convention this summer. 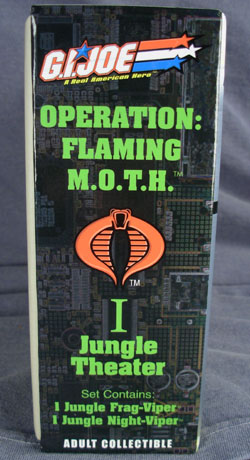 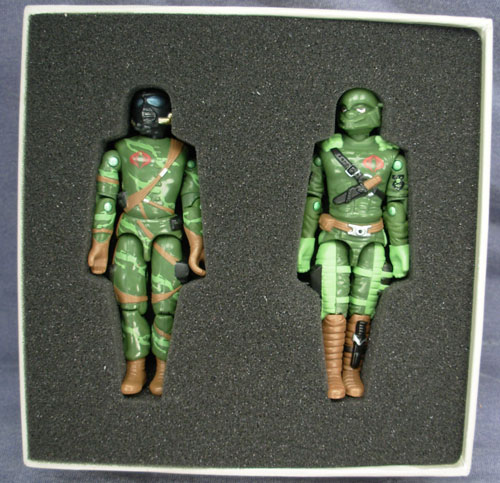 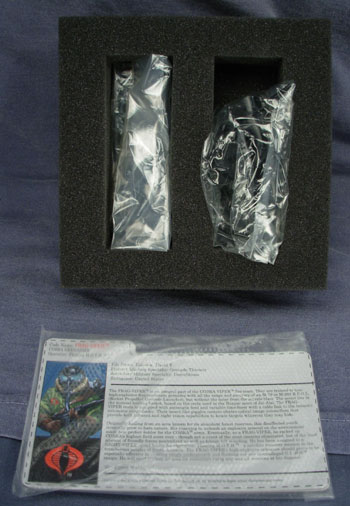 While I'm not normally wild about environmentally themed figures, the ones in this set are at least somewhat multi-faceted and can work in several different ways. Even though I'm not wild about the Night-Viper update, the colors are very nice, the figures are well-chosen, and the presentation is impressive to say the least.

This Flaming M.O.T.H. theme promises to be somewhat pricey, with figures coming in at around $16.00 a pop including shipping, but so far the figures are pretty high quality, and I think will end up being worth the price. I LOVE the Frag-Viper and like the Night-Viper all right, so I think it's worth the investment, if only to encourage the Club to keep producing high quality classic sculpt figures that a lot of us old school collectors are still longing for. 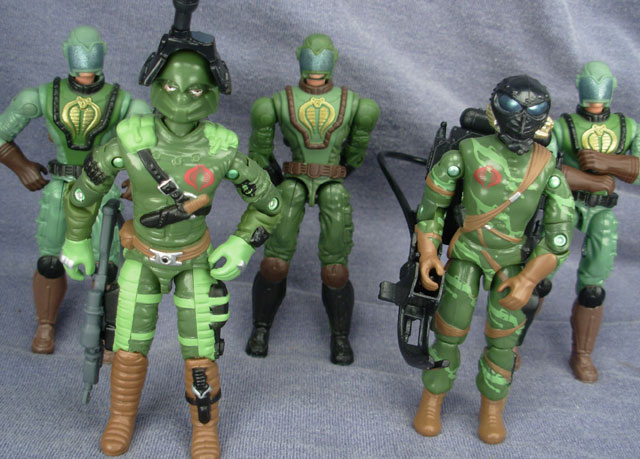 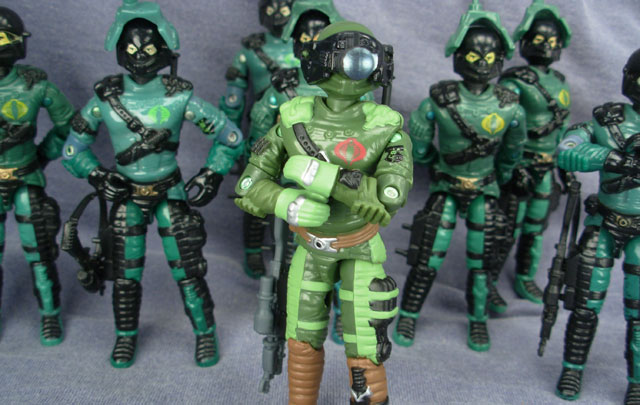 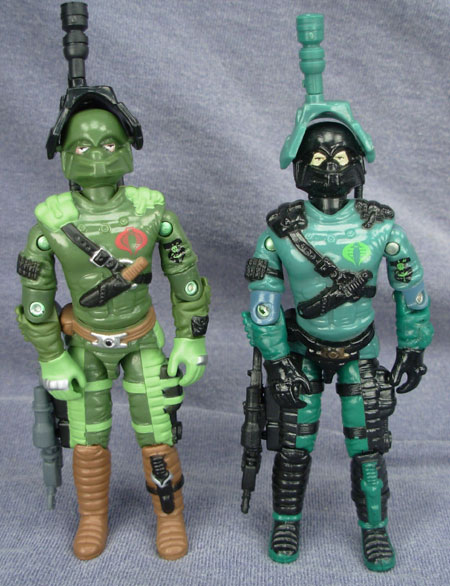 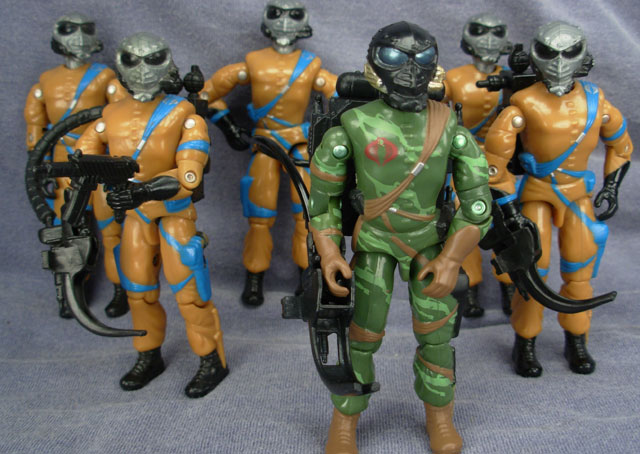 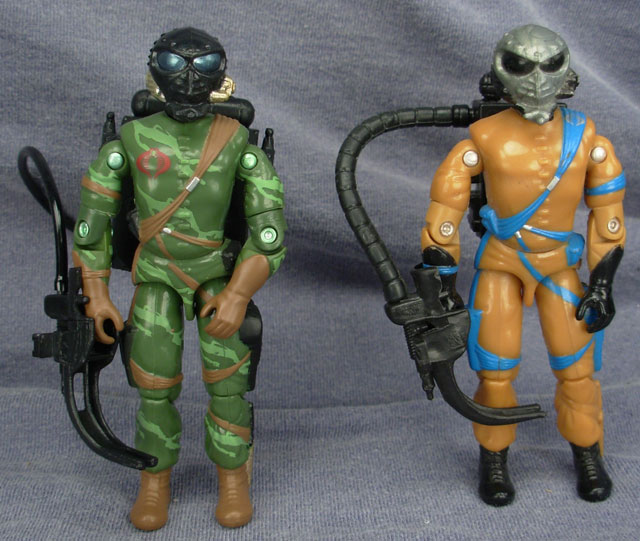 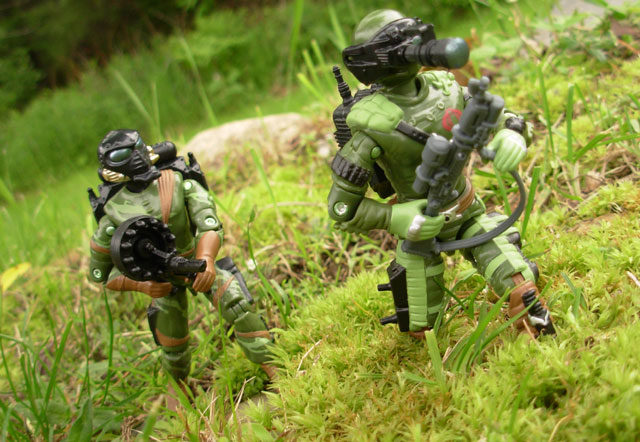 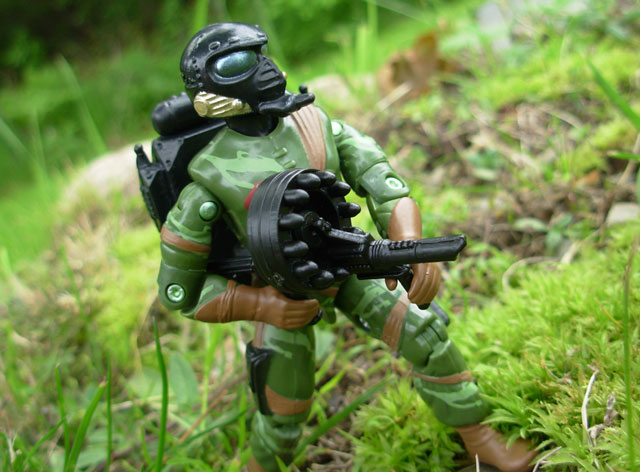 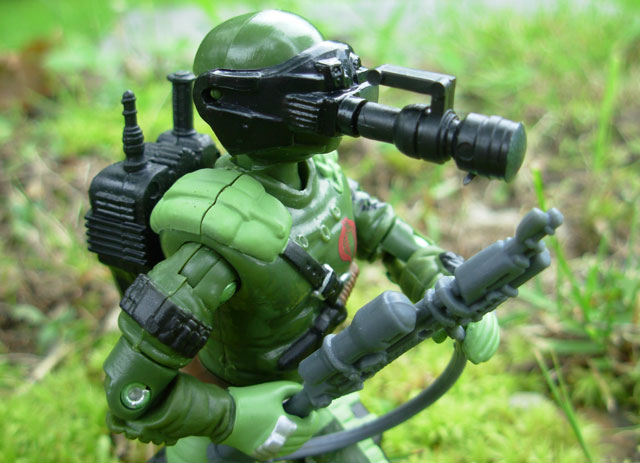 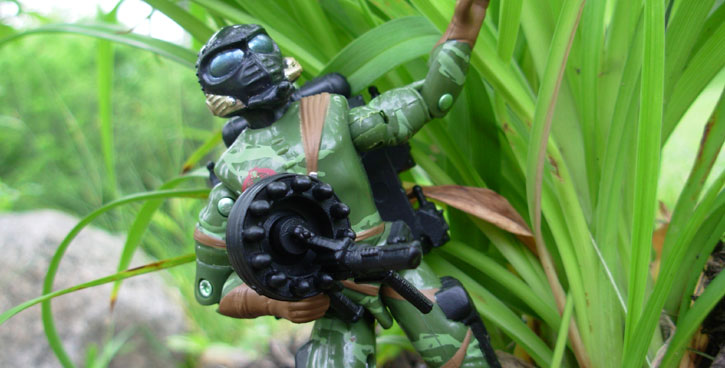 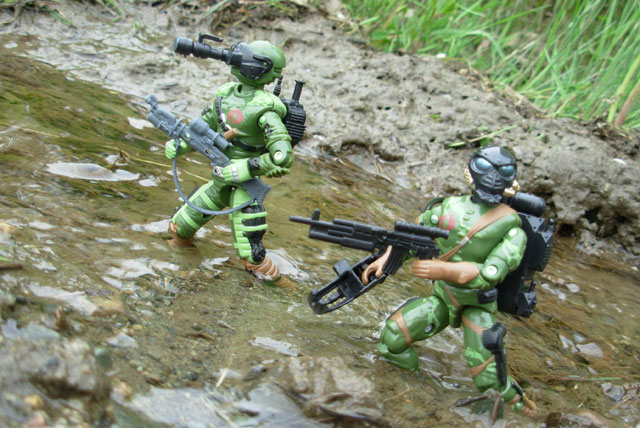 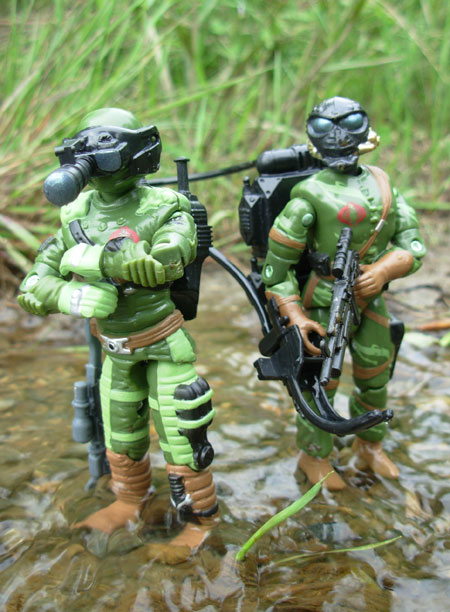