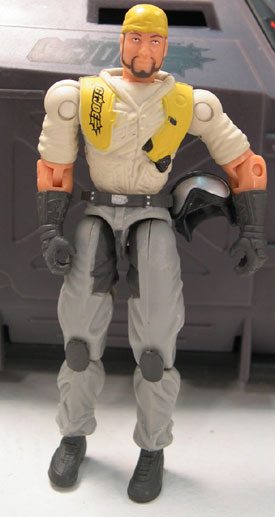 What the heck is going on here? Who are these Hasbro designers and where have they been for the past fifteen years? Seriously, it's been almost an eternity since we've gotten some really cool, really well designed vehicles, and now all of a sudden we're getting such amazing stuff back to back to back. I'm primarilly a figure collector when it comes to Joe...that's always been my first love. But man...over the past few months I'm find a whole lot more pleasure in the new vehicles than the new figures...not badmouthing the figures at all, but these rolling tanks are just way too cool for words, and every one of them seems a step above the last. First the Night Ops HUMVEE, then the H.I.S.S., then the R.O.C.C., and finally, the R.H.I.N.O., quite simply the pinnacle of achievement in the new sculpt vehicle category, bar none. The best.

First of all, I can't really say the design itself is revolutionary, just because you can tell that it borrows quite a bit from the famous Aliens movie that came out (and further revolutionized science fiction/action movies as we know them), but to see it actually crafted in plastic form is just bad ass. But even though this Joe toy borrows very heavily from the Aliens design, it seems able to add its own elements and really become it's own unique identity. The sharp, angled corners and sloped body armor are a major departure from the Hasbro vehicles of recent memory, and it really works well here. From the two flip up canopies in front to the mini spoiler in back, and all of the opening doors in between, the R.H.I.N.O. has style, substance, and power in spades.

It's streamlined front works very well, even with the two canopies and the built-in helicopter. The design and workings of the sloped armor fit in perfectly and look a lot like the mini jet within the R.O.C.C. which immediately tie the two vehicles together. Details abound on the R.H.I.N.O. as well, from small molded machine guns near the front, to the multi-layered armor, and well-concealed battle doors.

Doors, you say? Oh, yeah, the R.H.I.N.O. is filled with opening doors, compartments, and troop storage areas that enable you to fit a whopping twelve troops comfortably inside. It's amazing that a vehicle as streamlined as this has the troop carrying capabilities that it does. The carrier section of the R.H.I.N.O. is somewhat cramped, but it is surprisingly detailed, with a little seat and computer console in one area, and three nicely molded seats on the other side. Those seats lead out to a side door, very similar to the one on the right side, which is closed off. All of this intricate detail is quite impressive, also considering the mini-copter that ejects from the inside as well.

Another nice little touch of playability is the "surprise attack door" on the right side, too. The door is closed off from the troop carrier, but there is a button on the bottom that flashes a platform out and has troops standing there ready to attack. A very cool little feature, and something that Hasbro did not have to put on there, but did, just to give it a little more play value. Very cool.

Speaking of the mini-copter, how cool is this thing? Hasbro designed the R.H.I.N.O. copter so that it would slowly lift up out of the central cavity of the vehicle, with the hinged wings folding out, and it is a very cool sight to behold. It's not quite as solid and smooth as I would like, but that's a very minor complaint when it comes to the overall coolness of the feature, the helicopter, and the R.H.I.N.O. APC itself. The mini copter surprisingly seats two, and has a little clip on adapter (which will not fit on the copter, while it's inside) that serves as the twin laser guns and also lets you clip on a few of the changable weapons. I was really surprised at not only how roomy the cockpit was (it easily fits two new sculpt figures), but it's also amazingly well detailed. Two control sticks, nice stickers for monitors, and some cool little trimming...it's a fantastic little helicopter!

These changable weapons also reek of coolness. From twin machine guns to gatling guns to nasty looking missile launchers, all of the assorted weapons and gear that hook onto the armored hide of the R.H.I.N.O. look incredible and are nicely multi-faceted. I'm already trying to work out the best configuration for this vehicle and for the R.O.C.C., but the options are nearly limitless and I love this feature.

No doubt about it in my mind, design and playability are two major strong points of this vehicle...it is beautiful. 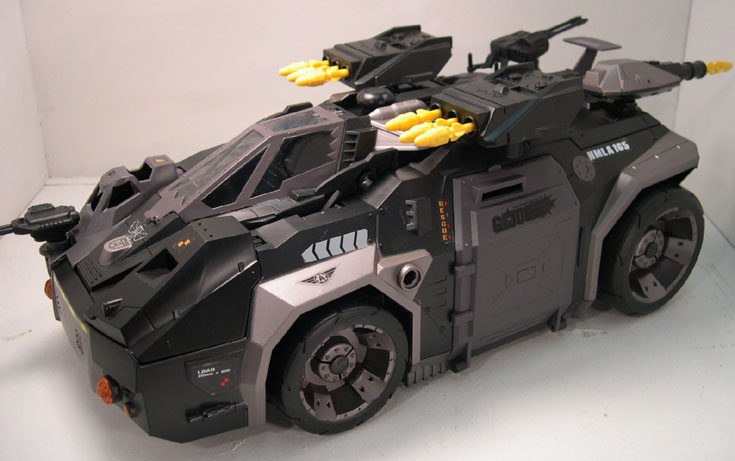 Does it look like the Alien APC? Oh, sure. But it still looks like a G.I. Joe vehicle as well and works almost seamlessly in the G.I. Joe universe. I can just see the Joes pounding this thing into a squad of BATS, tearing them up, and then deploying their strike force from within, blasting their way out. If a simple vehicle can instill that kind of imagination immediately, you know it's something potentially cool.

There are a couple of small hiccups that do interrupt playability slightly. Those two missile launchers on top look really neat and really powerful, but they get in the way of hatch opening and helicopter deployment. One of the box pics has them mounted on the rear, but then they block one of the hatches in back which doesn't seem especially functional either. According to the Hasbro instructions, they should be mounted in the center, on top (but the beauty of these weapons is you can put them wherever you darn well want to) but feel free to experiment!

In spite of minor glitches like that, this armored behemoth is a powerhouse and a great addition to your G.I. Joe motor pool. 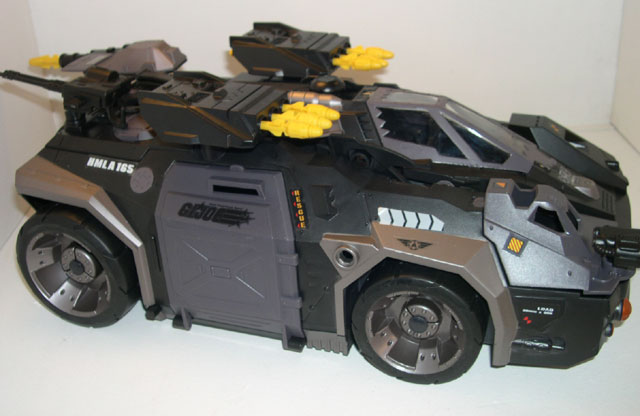 The figure is a mixed bag. Part Barrel Roll, part Switch Gears, and part a modified Valor Vs. Venom Heavy Duty the figure is a pretty cobbled together one, but honestly, I still like it. I can't really explain why...perhaps it's because I love Barrel Roll's mold so much, or that the slight modifications to Heavy Duty's head really makes him look like a completely different character. Whatever the reasons are, I kind of dig Cannonball, a lot more than I thought I would.

His colors immediately looked off to me when I saw him at the convention this past summer...but in person the white and yellow don't look quite so bad at all. They do clash with the R.H.I.N.O.'s colors pretty strongly, but they still look nice and the figure is different, which is much appreciated. I like his characterization on the filecard, too, and overall, he's a suitable driver even if he isn't a really impressive figure.

There is some debate currently about whether or not Cannonball's head is, in fact, a simple repaint of Heavy Duty. I'd say definitely not...there are clearly some modifications from what I can tell, although it most likely did start out as Heavy Duty. While the bandana sculpt itself is remarkably similar on the back, the faces are clearly different: 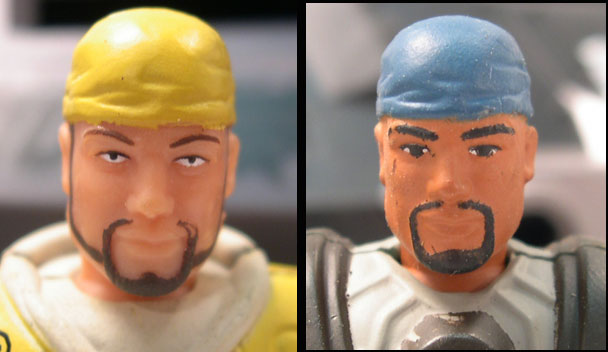 Perhaps it's the plastic used, or the molded flesh rather than painted, but Cannonball DOES look pretty different, at least to me, which is cool, and which makes him a more unique character.

What more can you ask for? A powerful, impressive looking vehicle that holds a dozen troops, has a nice looking helicopter built in, is loaded with weapons, and comes with a pretty cool figure. This vehicle is definitely worth the price of admission, and I highly, HIGHLY recommend picking it up...it is very much worth it. 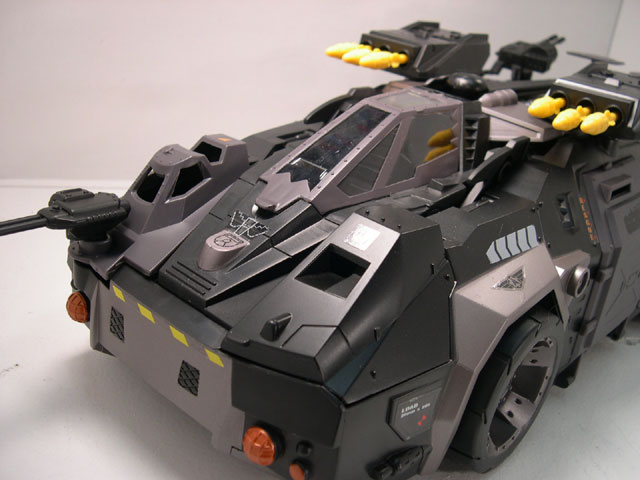 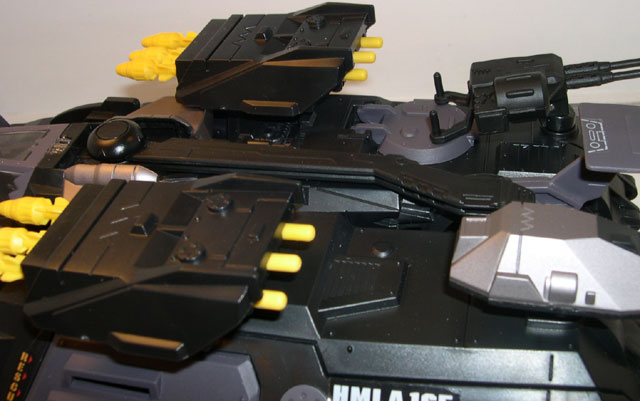 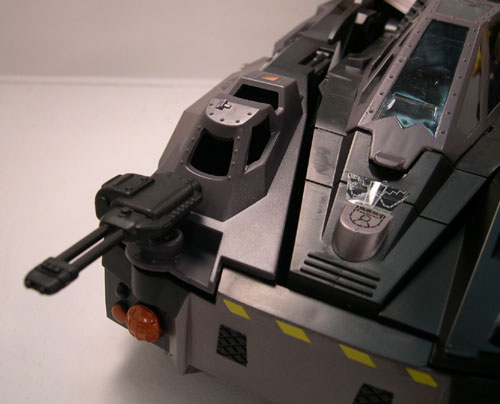 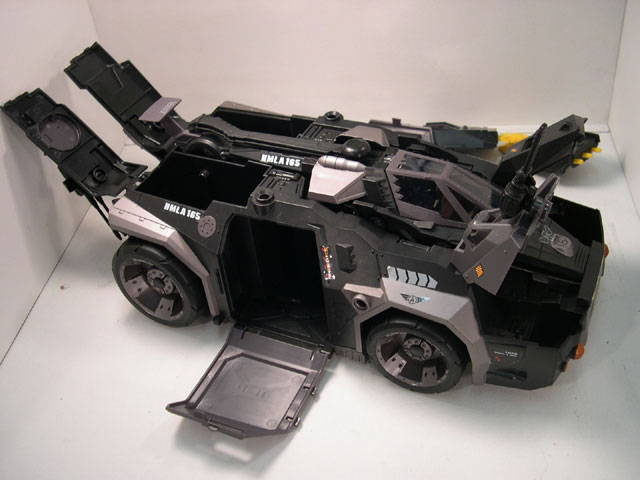 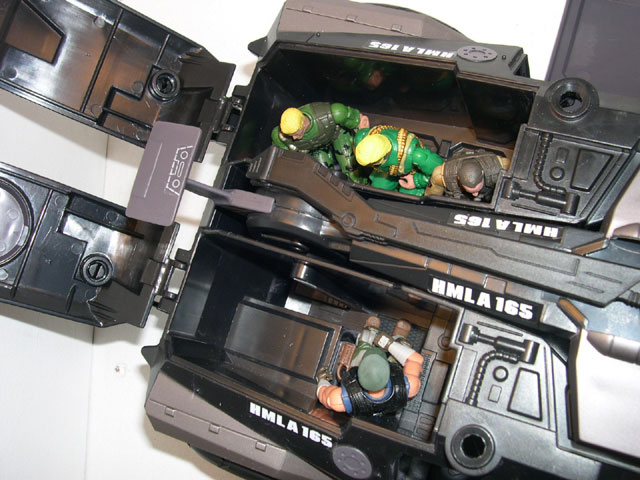 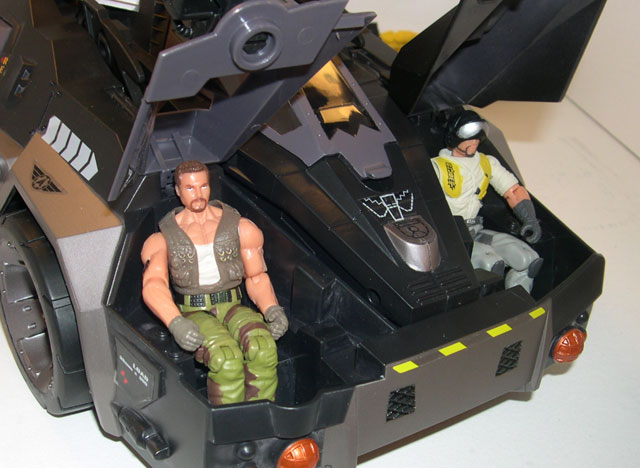 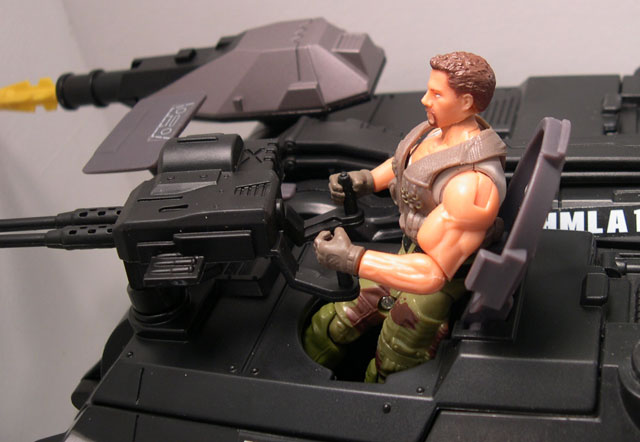 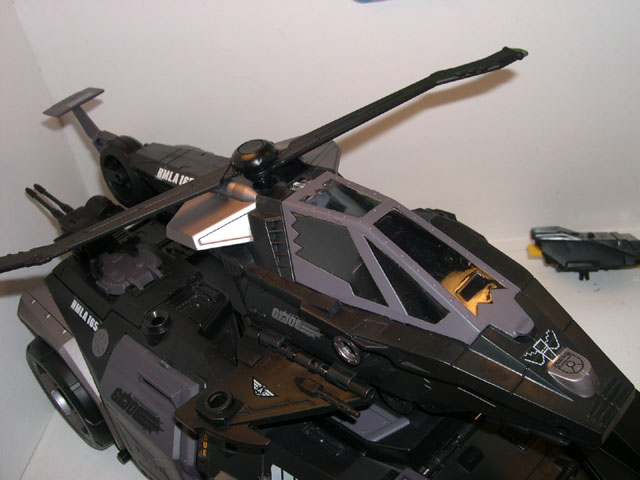 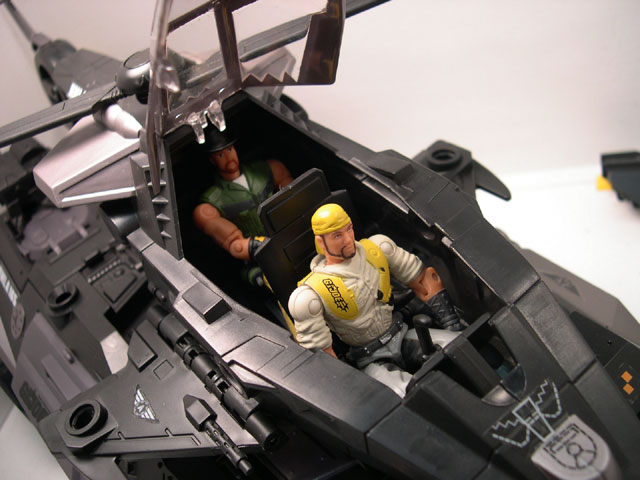 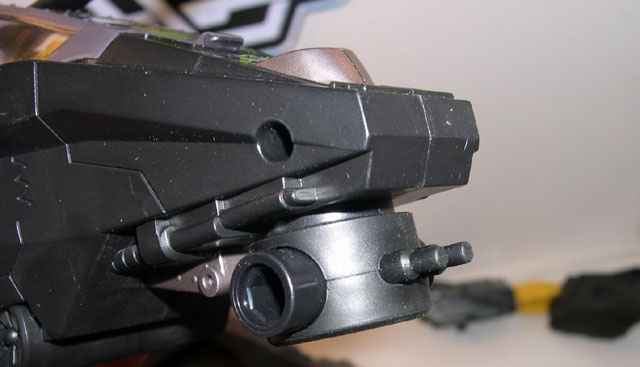 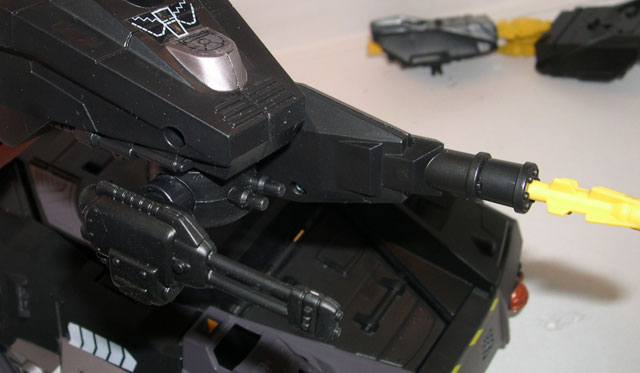 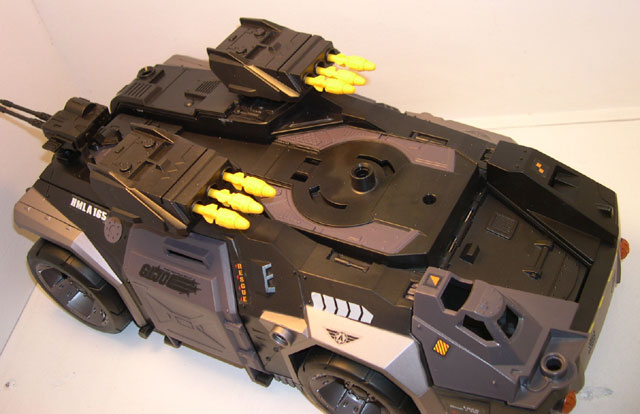 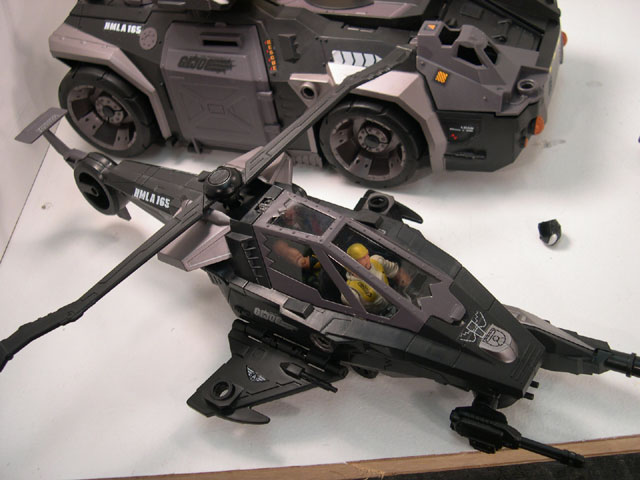 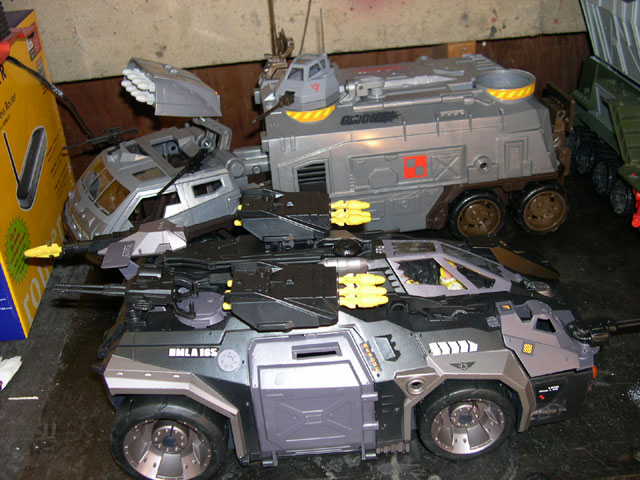 Back To Direct To Consumer