Congratulations! You found the second image! 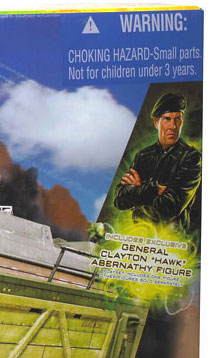 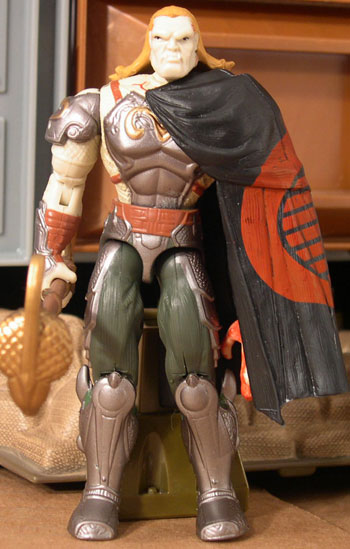 It's blatantly obvious that there will be two distinct camps when it comes to Venomous Maximus here. Those who really like him, and those who think he's the "death of teh line". Personally, I think we can afford to loosen up a little bit and let some outrageousness in and just appreciate a figure for what it is- a hyped up COBRA viking/roman warrior on steroids. And a really COOL looking one, too!!

I knew the minute I saw the V Max concept art that I would most likely fall under it's spell. I'm one of those funky Joe/comic fan folks who like things a little on the sci-fi side (but not TOO much ;) ). I've also got a soft spot for genetically or cybernetically engineered super powered humans larger than life and able to whip the snot out of your normal every day folks...that's why back in the day I loved the Mega Marines, and why I was always angry that the armor-tech figures turned out like they did. Venomous takes this prospect to the extreme, and works on a lot of levels. Not on levels that those realistic-loving folks will like, but for funky guys like me, he's a great character and a cool figure.

This mold just cranks all dials up to 11. The figure is huge, imposing and threatening in just about every way possible. From the fierce underbite with fangs to the long braided hair, even just his head sculpt is nasty. His right arm, although it's the non-mutated one, is still huge and armored, and looks to be the first arm released without the rivet. Whether that's because of the size of it, I'm not sure, but I'm happy to report all functionality is there and it's still fully usable. The armor on his chest reeks of a Roman gladiator and just looks great. I can see him wading into battle as bullets fly from his armor and he tears through troops like they were kids...a very cool vision in my head, and one that I'd love to put to "paper" at some point.

The rest of his body is just as huge, with large thighs and very cool elaborate armored boots, very reminiscent of the Spy Troops boots that Shipwreck came with (which were ones I really liked). The layers of armor on top of an already huge viking warrior are enough to make guys turn and run...and those who don't might regret it later.

Obviously the focal point of the mold lies with his left arm...the horribly mutated Resident Evil-esque massive mutated claw of destruction. As a focal point it works wonders. This arm is HUGE and dangerous, it's fingers molded into a hideous claw capable of grabbing your average Joe by the head and whipping him silly. I'm not sure how strategic Venomous Maximus' mind is, but his body looks like a walking machine of destruction just waiting to be unleashed.

The paint choices here are really, really effective as well. From the realistically colored blonde hair (no yellow here) to the odd, pale flesh and the weathered brass armor, Venomous Maximus is colored just as he should be. Look no further than his left arm to see a great mixture of flesh and red streak paint to get the effect of a mutated arm that works almost as well as the arm sculpt itself. Every color of the figure looks to be chosen for a specific purpose, and every one works.

Venomous Maximus IS the accessory, let's face it. But he does still come with what Hasbro calls a "War Hammer" and his removable plastic/rubber cape. Both items are sculpted well and serve their respective purposes. His cape stays on nicely as it should, and looks great with the COBRA sigil painted on it. His war hammer is very cool as well, with a sinister COBRA motif, yet still looks large and dangerous. With that monster arm behind it, I can see it doing some serious, serious damage.

I really like this figure and this character, and am almost tempted to work him into my Joeverse somewhere. Unfortunately, I don't think he'll quite fit into what I've got going on, but it's something to think about. Another curious fact is that in the comic book included with these figures, Venomous appears alongside General Hawk...also, his filecard does not mention the fact that he and Hawk are one and the same, even though Hawk's filecard does. Odd...

All in all, even with a questionable Duke figure, you should pick up this pack. If you don't like the non-realistic, non-military aspects of G.I. Joe, you probably won't like this figure a whole lot...but if you've got an open mind about things and appreciate the more fantastic avenues of G.I. Joe, do yourself a favor and give this figure a try. He's a lot of fun! 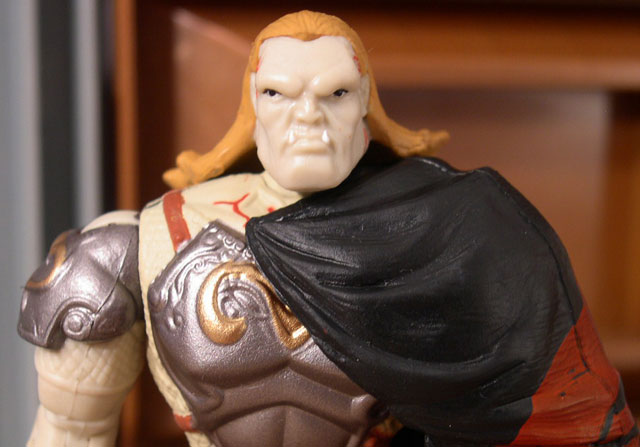 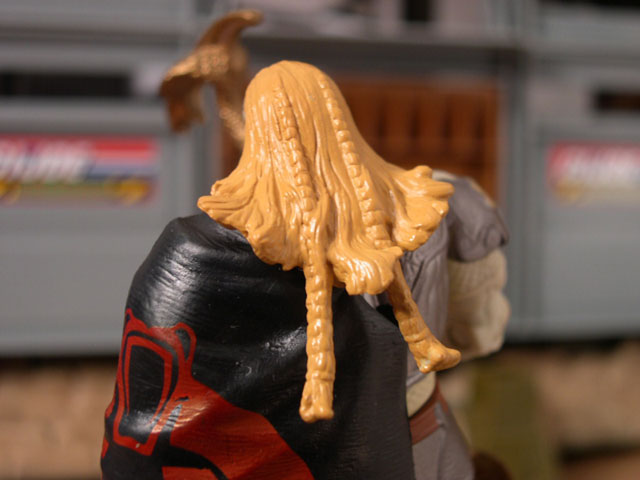 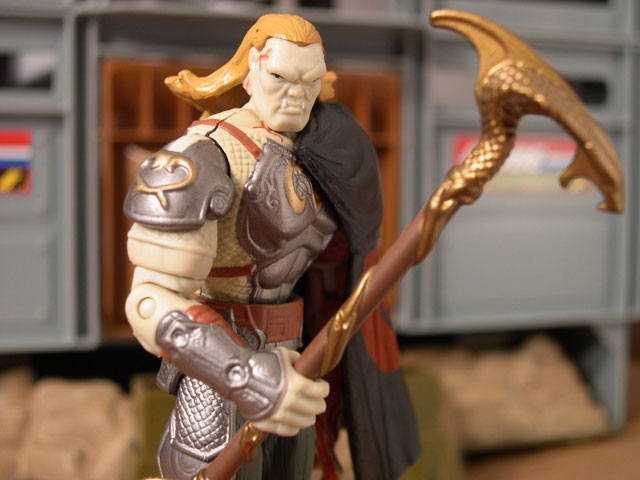 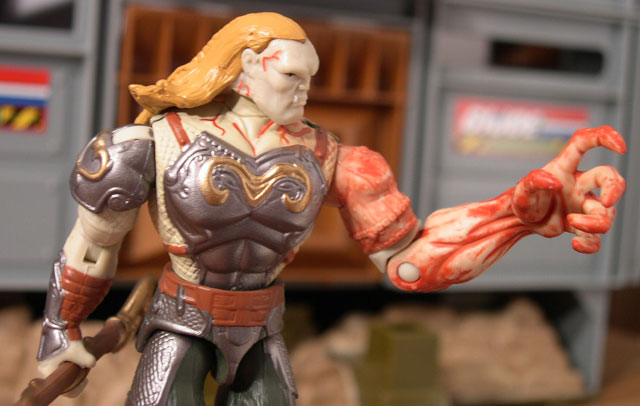 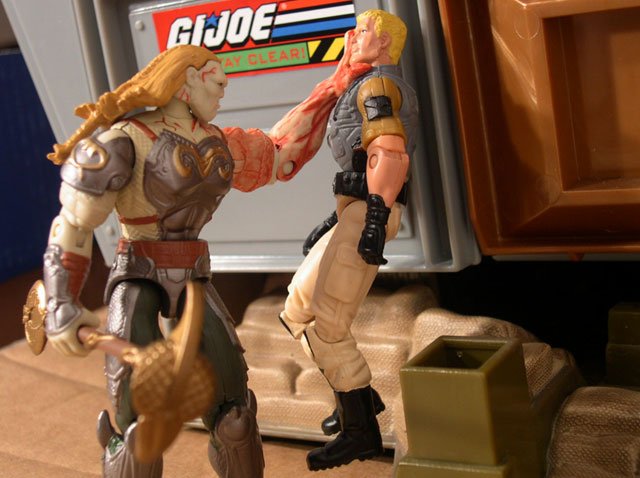 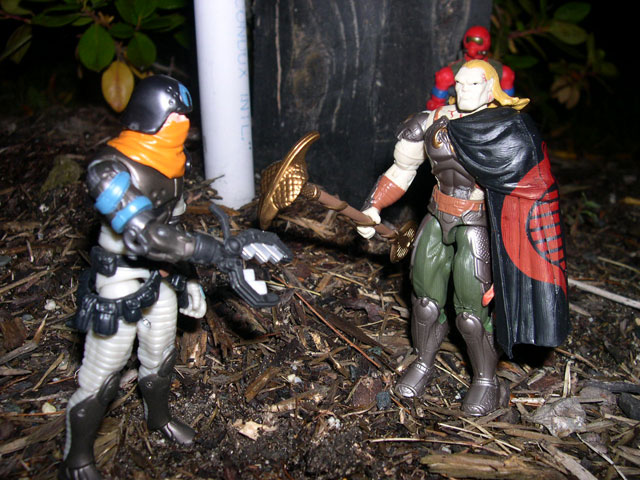 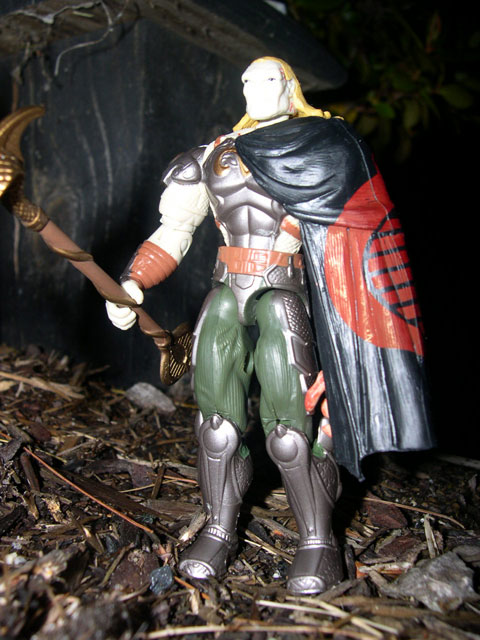