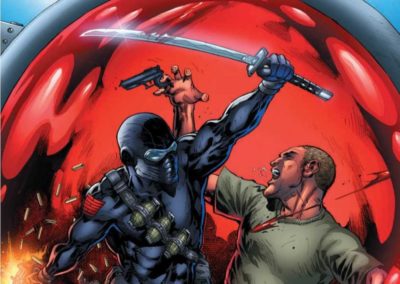 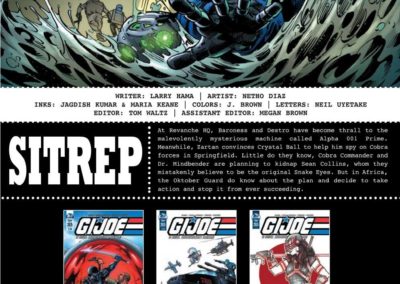 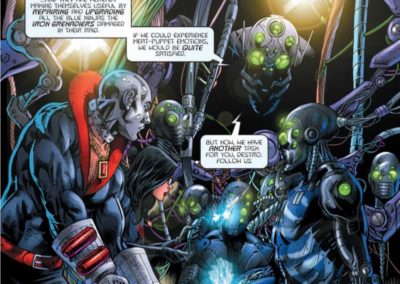 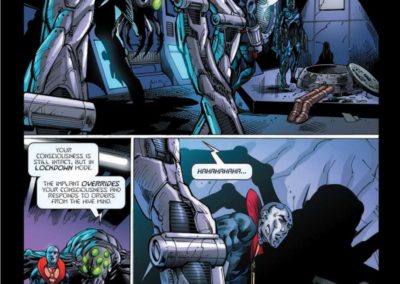 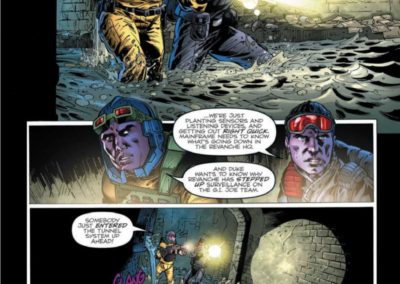 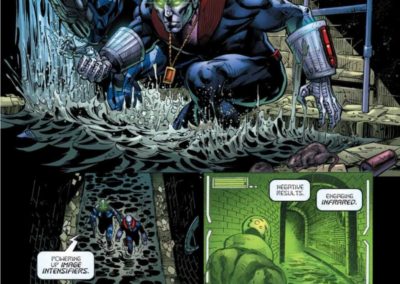 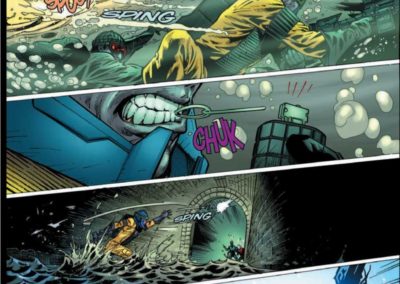 IDW Publishing has released their preview for G.I. Joe: A Real American Hero #253, which is a “special missions” style issue focusing on Duke.  Check out the solicitation info and the preview below.

“Special Missions,” Part 3 (of 5). G.I. Joe. Cobra. Two opposing forces. Two powerful war machines, each made more lethal by the undeniable strength of their individual parts. But who and what are those parts? Living legend Larry Hama shares some of their amazing stories in “Special Missions”—one-shot stories featuring a variety of characters and different artists to draw them! This issue, longtime G.I. Joe alum Brian Shearer joins forces with Larry to present G.I. Joe’s intrepid first sergeant without equal: DUKE!

Tomorrow looks to be a big new comic day for G.I. Joe fans and comic or toy fans in general!  Revolution kicks off with a bang, launching both Revolution #1 and Rom: Revolution #1.  Not only that, but Action Man #4 hits shelves and G.I. Joe: A Real American Hero #232… and judging by the preview for RAH, there’s a shocking turn of events for one of our Joes!

Check out the full previews after the jump!

X MARKS THE SPOT! Will ACTION MAN and his allies put aside their differences long enough to stop DOCTOR X and save the world? Or will the bad Doctor’s master plan tear apart young ACTION MAN’s career before it starts?

COBRA continues the search for their rogue agent. And an operation gone wrong costs a G.I. JOE member the one person they care about the most…

THE REVOLUTION BEGINS! Explosions rip across the Earth—and all signs of blame point to OPTIMUS PRIME and the TRANSFORMERS! G.I. JOE refuses to go quietly—and they assemble heroes big enough to stop the invaders! ACTION MAN and M.A.S.K. fight for humanity—but where do ROM and the MICRONAUTS stand? Celebrating more than a decade of stories by IDW and HASBRO, this unprecedented bi-weekly event draws everything together—and leaves nothing standing. The REVOLUTION is here—TAKE A STAND!

A REVOLUTION tie-in one-shot! ROM’s enemies, the DIRE WRAITHS have infiltrated G.I. JOE at the highest levels, clashed with the TRANSFORMERS over ORE-13, and now… stalk a lone stranger? Why would evil aliens bent on world domination terrorize one anonymous person? The answer is bigger and more sinister than you’d ever imagine!

Life has been busy over the past few months, and I realize I’ve let the comic previews slip…shame on me.  COBRA Nation has hit Part 3, and issue #228 of G.I. Joe: A Real American Hero lands at comic shops tomorrow.  Check out the preview below.

My hope is to actually get a review of this one posted, too, because it’s a pretty fun issue which actually does something really interesting…

Things have been quiet on the Cobra front, as far as G.I. JOE can tell… but that may just be because there’s a snake in the grass on the homefront. Could there be a traitor within G.I. JOE’s ranks?

COBRA World Order comes to its Earth shattering conclusion on Wednesday at your local comic shop!  Check out the preview below and get ready for the rise of the COBRA Nation!

COBRA has unleashed the COBRA WORLD ORDER and now G.I. JOE must fight back before the world is pushed past the brink and COBRA reigns supreme! Larry Hama and S L Gallant bring fans the concluding chapter of the story, which will change the world of G.I. JOE forever!

The COBRA World Order moves at a rapid pace, with both Chuckles and Cover Girl wounded in action, the political machinations churn onward.

The latest installment of this series comes to your local comic shop tomorrow.  Check out the preview below!

Snake in the Grass! Just when G.I. JOE thinks its safe, COBRA reveals another layer to the Cobra World Order, as a close ally is revealed as a traitor. Can G.I. JOE survive this betrayal?